This week, the Supreme Court ruled in favor of subsides which support federal health insurance exchanges which operate in the states under the Affordable Care Act. Richard B. Saltman writes that the core argument over Obamacare goes beyond the role of these subsidies and that many who oppose it do so on the grounds that it is an expensive federalization of health care. He argues that the Supreme Court has clearly and intentionally misread the clear and intentional language of the Affordable Care Act, and in doing so has only moved the controversy and debate on to the 2016 Presidential election.

The Supreme Court of the United States announced its decision in its second major case on the constitutionality of the 2010 Affordable Care Act (ACA) – colloquially known as Obamacare – on Thursday, June 25, 2015. Much as in its decision on the first case, a majority of the justices labored mightily so as to support the government’s position, and to sustain the law. As might be expected, this second decision was met by much the same choruses of political yeas and boos that were heard the first time around. Democrats spoke about the majesty of the Constitution, while Republicans carped about “nine unelected justices.”

The political background to the case

As before, on its merits, this second case itself was unremarkable. As part of the bait to the 50 semi-sovereign states that compose the federation that is the United States, the writers of the 2010 Act had dangled massive (hundreds of billions of dollars) in health-services-related subsidies to those state governments who set up “health insurance exchanges.” Under the law, these exchanges were to serve as an online marketplace for approved private health insurance policies for low and middle income citizens. If the law was to successfully provide health insurance to those who lacked it (or to the some 5-7 million individuals whose existing policies would be deemed insufficiently comprehensive and would therefore have their existing policies summarily cancelled by federal order), then it was essential to have these exchanges in place and working.

Further, as a backup in case some states still resisted setting up such an exchange, the law provided for the federal government to establish a separate “federal exchange” for eligible citizens of those non-compliant states. However the law was explicit: non-compliant states would not receive their share of the billions in dollars of subsidies, and their citizens would be ineligible to personally receive federal-income-tax-tied subsidies to pay for most of the cost of the private health insurance premiums. The intention of the (entirely Democratic Party) drafters of the ACA was very clear: pressure recalcitrant Republican state governors to set up the new exchanges by threatening to withhold crucial financial subsidies from their otherwise federally qualified citizens. This strategy was confirmed in documents from Jonathan Gruber, the MIT economist who designed the ACA’s insurance subsidy scheme (and who five years later was disowned by the Obama Administration after video appeared in which Gruber stated that his plan was based on “the stupidity of the American people”).

Thus the 2010 Act contained language which stated – explicitly and unambiguously – that federal income subsidies for health insurance premiums would be available only to those individuals who enrolled on health insurance exchanges “run by the state.”

What the writers (and legislators) of the ACA had never anticipated, however, was that some 37 states either chose not to set up health insurance exchanges, or (Oregon and Alaska among others) could never manage to set up a working exchange despite millions of dollars in federal grants to do so.

As written, then, the Affordable Care Act was faced with an existential crisis. In normal politics, if the majority party that had passed the law still had its majority, it could pass a legislative fix. But the American electorate in 2010 delivered a Republican majority in the House of Representatives – in no small measure due to anger at the passage of the ACA. The solution, put in place by the US Secretary of Health and Human Services at the bidding of the White House, was to simply tell the Internal Revenue Service to extend income tax subsidies to all individuals who signed up on the federal exchange as well. Since the effort to squeeze the Republican governors had failed, the Obama Administration simply changed their implementation strategy to pretend their own signature law was never written the way it was. 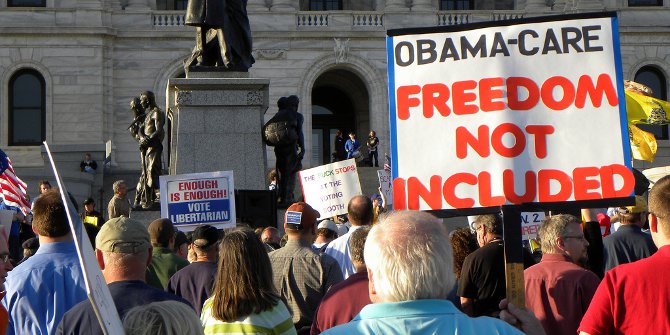 The implications of today’s decision

The core dispute over the ACA was – and remains – a much larger issue than the specific efforts to ensure higher levels (rather than universal) of health insurance coverage. Up until 2010, the federally constructed United States, unlike most European countries, had never had an explicit legislated national health policy. The central thrust of the ACA, however, with nearly as many service delivery as insurance based measures, was to create just that national health policy. Thus opposition to federalization of health care was (and remains) at least as strong a component of overall opposition to the ACA as to its specific health care provisions.

It is worth noting that currently in the UK the Cameron government is moving to strengthen decentralization of health and other social policies from the national level to the four countries (which would be called regions elsewhere) that compose it, and that experiments are now being undertaken inside England to decentralize most health service delivery decisions further to the local level in Greater Manchester. Yet in the much larger – and federally structured – United States, with a population of 315 million (three fourths as many as the entire EU) and covering six time zones from Washington to Hawaii, the 2010 ACA sought to dramatically centralize both funding and service delivery decision-making at the national government level and in the national capital city.

Five years after the passage of the ACA, more citizens still oppose it (51.4 percent) than support it (43.6 percent). That its vast subsidies are patently unaffordable, and a fiscal time-bomb that will go off in the next recession, is clearly a factor in the eyes of those who oppose it. That millions of Americans who had good private insurance before 2010 now typically have $6000 in annual deductibles (before any insurance payment kicks in)  and have already seen 30 percent to 60 percent increases in premiums  – with more forecast for 2016 – is another factor.

That this opposition has never jelled into political action, however, reflects the complete and abject failure of the opposition Republican Party to propose a viable alternative health strategy. As the old-time Vermont saying has it, “You can’t fight something with nothing.”

Meanwhile, those who lacked insurance and are now receiving large federal premium subsidies have only good things to say about the program, as do most rank and file members of the left-of-center Democratic Party. Private insurance companies have adapted to the law (as they must to survive), and providers have re-organized to meet the new conditions to receive federally approved reimbursement. Thus five years after initial passage, despite continued strong political opposition, the 2010 ACA is increasingly looking like an unrepealable part of the permanent institutional structure of the US health care system.

In this bitterly contested political atmosphere, the decision this week of the Supreme Court resolved little. Instead, by clearly and intentionally misreading the clear and intentional language of the 2010 Act, the Court has only kicked the political can down the road – to the 2016 Presidential election.

That the Court did so is not surprising: the tradition since Chief Justice John Jay established the principle of judicial review in the early 1800s has been for the Court to avoid any direct challenge to a sitting Administration. The one example when a Court did not follow this dictum – in 1937 during the Depression years – President Roosevelt responded by proposing to pack the Court with 6 newly appointed Democratic Party sympathizers. The Court, of course, backed down.

The decision on the constitutionality of the Affordable Care Act – like the 2012 decision before it – reflects the keen political sense of Justice John Roberts. In the process of coming to this decision, however, the Court has considerably damaged its legitimacy as an independent third branch of the federal system in the eyes of a substantial segment of the American electorate. The cost of that loss of credibility will only be known in some future political crisis which will be when that bill will come due.