School boards were more likely to have Latino members in counties covered by the language assistance provisions of the now defunct Section 4 of the Voting Rights Act.

School boards were more likely to have Latino members in counties covered by the language assistance provisions of the now defunct Section 4 of the Voting Rights Act.

More than two years ago the Supreme Court struck down Section 4 of the Voting Rights Act, meaning that certain districts and states would no longer need to gain preclearance from the U.S. District Court before making changes to electoral rules. In new research, Melissa Marschall and Amanda Rutherford look at the effects language assistance provisions, Sections 203 and  4(f)(4), of the Voting Rights Act (VRA) on Latino representation on local school boards. They find that in counties covered by the VRA, school boards were more likely to have Latino members, and that this effect was enhanced when elections were monitored by federal observers.

The Supreme Court ruling in the Shelby County v. Holder case in June 2013 struck down Section 4 of the Voting Rights Act (VRA), finding the formula for coverage—which was based on discriminatory practices and demographic conditions from the 1960s and 1970s—unconstitutional. Section 5 required covered jurisdictions—cities, counties, school districts, special districts, and states—to obtain approval (or preclearance) from the U.S. District Court for the District of Columbia or the Attorney General before making any changes to their electoral rules or procedures.  Without Section 4 however, preclearance is no longer required and the Justice Department’s power to pre-empt electoral changes that could lead to retrogression is no more. In fact, Shelby County v. Holder also has implications for Section 4(f)(4) of the Voting Rights Act, since it too relied on a coverage formula rooted in the past. While the decision did not affect limited-English proficient voters in jurisdictions covered under Section 203, for racial, ethnic, and language minorities in Arizona, Texas and other jurisdictions covered under Section 4(f)(4) is that the burden of proof for demonstrating that electoral practices and procedures have led to retrogression in their ability to effectively exercise of their electoral franchise now falls on them.

Interestingly, while the VRA has occupied an important position in popular discourse on African American and Latino participation in politics, there have been surprisingly few studies devoted to the question of how it has affected political processes and outcomes for these groups. How do different provisions of the VRA operate, and under what conditions should we expect them to affect black and Latino representation in politics? In recent research, we set out to answer these questions. We focused specifically on the language assistance provisions of the VRA, Sections 203 and 4(f)(4), and investigated the effects of these provisions on Latino representation in local government, namely local school boards. Unlike the preclearance requirements of Section 5, which provided built-in oversight and enforcement, the language assistance provisions of the VRA depend on the cooperation of local election authorities for implementation and compliance. This design feature, in conjunction with the fact that coverage under Section 203 is dynamic (being re-evaluated after each Census), may mean that the efficacy of these provisions may be weaker, which in turn may make the voting rights of language minorities more vulnerable.

Examining the efficacy of the language assistance provisions means that we must look more closely at the incentives and behaviors of federal and local officials in the form of oversight, compliance, and enforcement behaviors. With a nationally representative sample of more than 1,600 school districts, we conduct rigorous empirical analyses to test the effects of the language assistance provisions (and other covariates) on Latino school board representation from 1984-2012. We model Latino representation as a two-stage process that considers whether school districts have overcome the hurdle of electing their first Latino board member and, if so, what factors explain expanded Latino representation beyond a single seat.  We also measure Section 203 coverage in multiple ways to determine if it is associated with similar or different effects on representation.

In addition to confirming the effects of group size and electoral arrangements, our findings provide the first systemic evidence that the language assistance provisions have a direct effect on Latino representation in local government.  The strongest effects of Section 203 occur when coverage is longstanding and uninterrupted, as seen in Figure 1 below.  Yet, this positive link may not be without limitations.  While our results indicate that VRA coverage significantly increases the likelihood of achieving any Latino representation on a school board, they do not find consistent effects beyond a single board member.  Since increasing the number of Latino representatives on a school board depends critically on larger numbers of Latino candidates running for local office, the weaker effects here may stem at least in part from the fact that there is still a shortage of Latino candidates in many districts. In addition, the criterion for Section 203 coverage that requires the illiteracy rate of the target population to be higher than the national average means that the Latino population in Section 203 covered jurisdictions is doubly disadvantaged. 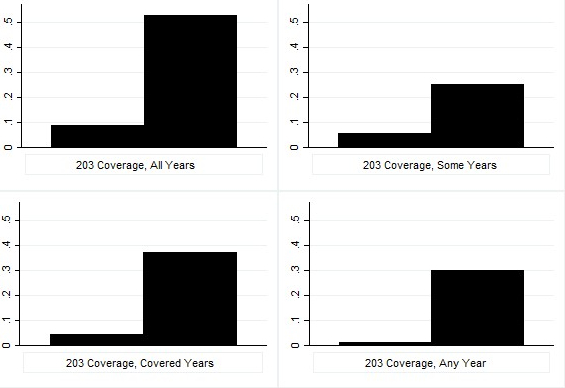 In a separate set of analyses, we also examined whether higher levels of oversight and enforcement by the federal government played a role in Latino school board representation in covered jurisdictions. We examined whether the presence of federal election observers or whether federal cases raising claims under the language assistance provisions of the VRA were associated with Latino representation in school districts covered under the Section 203 or 4(f)(4).  Here we find no effects of litigation, but strong, positive effects of federal election observers. In particular, in districts where elections have been monitored by federal observers, we see significantly greater numbers of Latino school board members in office. This suggests that federal oversight has had an important effect on expanding Latino representation beyond a single seat. Overall, our study underscores the continued need for federal government involvement in protecting the voting rights of underrepresented groups, in this case, language minority citizens.

A version of this article first appeared at the blog of the American Journal of Political Science.

This blog is based on the article “Voting Rights for Whom?: Examining the Effects of the Voting Rights Act on Latino Political Incorporation,” in the American Journal of Political Science.