The Hispanic population of the US is growing rapidly, and by 2040, all but the oldest ages in many states will be majority Hispanic.  Ron Angel writes that this ageing Hispanic population poses many challenges for social security in the US, with this group far more likely to lack a retirement plan or savings. He argues that the moves to privatize social security and the increasing restrictions on the availability of Medicaid put many Hispanics at risk of poverty and poor health in their retirement.

Immigration and ethnic diversity define the United States.  Yet, as in Europe, the reality of diversity has never enjoyed universal approval.  New immigrants have always been met with suspicion, although earlier waves of European immigrants eventually blended into a white America in which old national identities hardly matter.  Today new arrivals come from Asia and Latin America, with Mexico topping the list.  The new Latin immigrants are received with the traditional stereotypes and suspicion, yet in many ways it is worse.  Harvard political scientist Samuel Huntington, like many others, sees Mexicans as unwilling to assimilate, making them uniquely threating to what has historically been a white Protestant culture.

Although one might dismiss such views as extreme, Huntington’s observation that the Hispanic population of the U.S. is growing rapidly is clearly correct.  In many parts of the country Hispanics do or will soon represent the majority, and Hispanics represent an ever growing segment of the labor force.  In the relatively near future a largely minority labor force will be called upon to support a largely non-Hispanic white retired  population, a situation that could add an ethnic dimension to conflicts over Social Security, Medicare, and other social programs that support the elderly (Figures 1 – 4).

Figure 1 – Percent of Texas Population by Age Group and Ethnicity, 2000 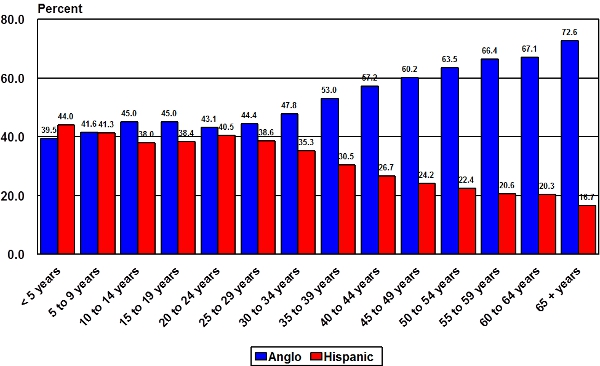 Figure 2 – Percent of Texas Population by Age Group and Ethnicity, 2040 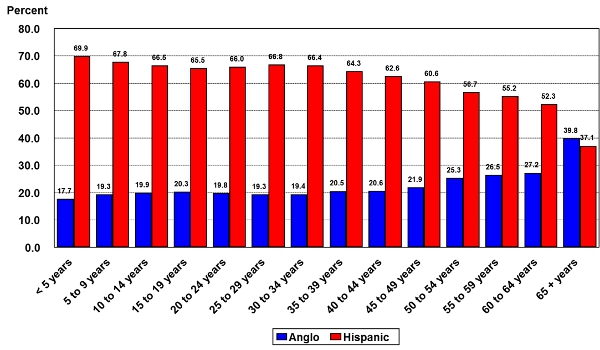 By 2040 all but the oldest ages will be majority Hispanic.  The pattern for Texas reflects that of the rest of the nation. 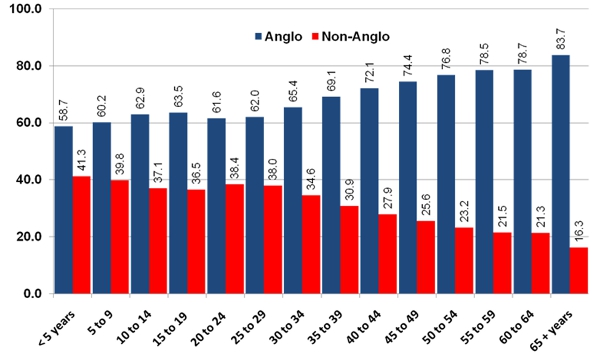 For the US as a whole in 2000 the younger age ranges were heavily non-Anglo, but among the older age ranges Anglos are by far the majority. 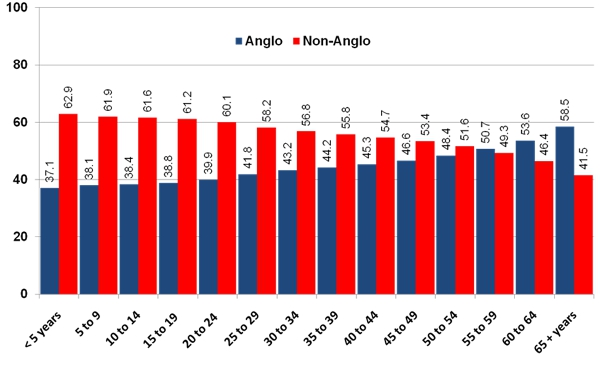 By 2040 all but oldest age ranges will be majority non-Anglo.

For middle class Americans employment-based retirement plans guarantee a secure retirement.  Unfortunately for the approximately half of Americans without a private retirement plan or savings, a group that includes a large fraction of Hispanics, old age means limited consumption.  By the time they reach retirement age Hispanic individuals and families have far less wealth than non-Hispanic whites.  They are also far less likely to have a private retirement plan.  Among Mexican-origin Hispanics on average sixty percent of their total income is from Social Security, compared to 37 percent for non-Hispanic whites (Figures 5 and 6).

Figure 5 – Wealth of Couple Households in which the Head is 65 or Older by Hispanic Ethnicity and Nativity: 2008 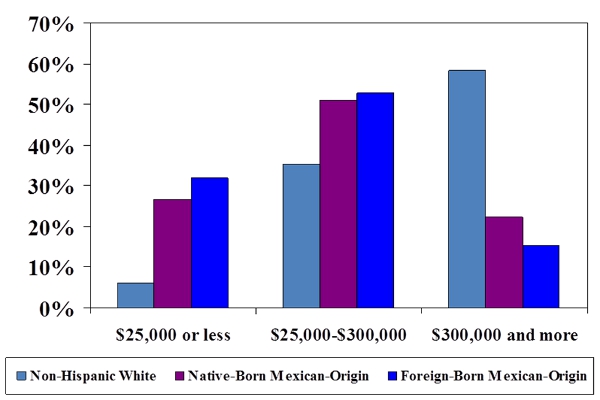 Mexican-origin individuals have historically suffered serious disadvantages in the labor market and as a consequence are at high risk of lacking retirement and health benefits.

Figure 6 – Sources of Retirement Income by Race and Mexican Origin, 2010

The sources of retirement income for non-Hispanic whites, blacks, and Mexican-origin retired individuals differ significantly.  Sixty percent of total income among Mexican-origin retirees is from Social Security, making them particularly vulnerable to reductions in payments.

The privatization of Social Security: Serious consequences for Hispanic families

In 2005 President Bush proposed privatizing at least a portion of Social Security.  The proposal was opposed by the American Association of Retired Persons (AARP) and other organizations and was never passed by Congress.  Privatization has never been popular with the public at large and the 2008 recession clearly revealed the dangers of private investment accounts.  Nonetheless the possibility that in the future full or partial privatization will be introduced has significant implications for the elderly generally, and for Hispanics in particular.  Most private employers have already shifted to individual 401(k) type plans.  Given the labor force disadvantages faced by many Hispanics, private pension plans pose a serious risk of inadequate retirement income.

Other proposed reforms of Social Security pose additional potential risks for older Hispanics and their families.  One such proposal is to change the way in which the Social Security cost of living adjustment (COLA) is computed.  Without going into detail, the new formula, labeled a “Chained Consumer Price Index for All Urban Consumers,” would result in a lower COLA adjustment each year, resulting in substantial savings in the long term.  Although the potential Social Security Trust Fund shortfall calls for cost controls of various sorts, reductions in the COLA could adversely affect the benefits for those who are already living on minimal incomes.

Given the fact that Medicare provides basically universal coverage to those over 65 one might imagine that the program guarantees adequate health care access to all older Hispanics, or at least citizens and legal residents.  Unfortunately, Medicare does not cover all of the costs one can incur in the event of a serious or protracted illness.  Medicare pays only 80 percent of hospital costs and includes premiums for physician and prescription coverage.  In order to be fully protected against potentially ruinous medical expenses one must own a supplemental “Medigap” policy to cover the costs that Medicare will not pay.  These are purchased privately or provided by previous employers.  As a group Hispanics are less likely than non-Hispanic whites to have access to private Medigap plans.

This lack of access to Medigap coverage means that many older Hispanics are dependent on Medicaid, the federal/state program for the poor, to cover the charges that Medicare does not pay.  With Medicaid costs to states increasing, more restrictive eligibility criteria are possible, if not likely.  Clearly, reductions in Medicaid eligibility, in conjunction with proposals to shift more of the cost of Medicare onto beneficiaries, pose serious risks for older Hispanics and other poor Americans.

Raising the Medicare eligibility age:  Many Hispanics could be left out

Given the aging of the population Medicare expenses will inevitably increase and cost control measures must be introduced.  One suggestion is to raise the age of eligibility for Medicare from 65 to 67, as is already occurring for Social Security.  The consequences for older individuals without access to private or employer plans could be disastrous.  An increase in the age of eligibility for Medicare could leave a huge number of older individuals without insurance at an age when medical problems become common.  If the Affordable Care Act (ACA), or “Obamacare” as it is popularly known, including the extension of Medicaid benefits to childless adults with low incomes, were to be fully implemented the consequences might not be as serious since individuals 65 to 67 would be eligible for subsidized coverage.  If, on the other hand, the program were to be seriously underfunded many individuals over the age of 65, including a large fraction of Hispanics, could be left without coverage of any sort.

The ACA represents an important incremental step toward universal health care coverage.  The legislation includes provisions that benefit older Americans, and again because of their elevated level of need, the potential benefits are particularly important for older Hispanics.  Under the ACA older individuals receive preventive services at no cost, and they receive significant discounts on prescription drugs.  A major part of the Affordable Care Act was a provision for extending Medicaid to childless adults with incomes below 133 percent of poverty.  This extension would greatly decrease the number of low-income adults without health care coverage and it would have greatly benefitted working-age Hispanics.  The Supreme Court, though, found the requirement that states extend Medicaid to poor adults unconstitutional.  Twenty-two states have to this date chosen not to expand Medicaid.  Among these are states, like Texas, with large Hispanic populations.

It is clear that for Hispanics, as for all other Americans, their situation in the latter part of the life course is determined by what occurs earlier, as well the opportunities for social and economic advancement they inherit from previous generations.  These opportunities are determined by history and the specific circumstances of the group’s incorporation.  Clearly individual effort and cultural factors play a role, but those factors operate within the structural constraints that determine a group’s level of individual and collective advantage.  At the same time that defenders of the elderly and of Hispanics work to insure the adequacy and equity of Social Security, Medicare, and other social welfare programs, they must work toward establishing a new social order in which individuals enjoy access to the sorts of opportunities that allow them to achieve self-sufficiency, to progress socially, and to insure their own healthy and dignified old age.

This article is based on the paper, ‘The Consequences of Social Welfare Policy for Older Hispanic Families’, in Public Policy & Aging Report.