In many US states, rather than facing partisan elections, judges are subject to a yes/no referendum from voters. David Hughes writes that these retention elections were introduced to take the politics out of judicial elections. In new research, he finds that despite this intent, judicial retention elections have become increasingly partisan over the last decade, leading to increased campaign spending and voter turnout.

Retention elections—where judges are given the thumbs up or down by voters in order to keep their jobs—are becoming more expensive, partisan, and better-advertised. These institutions were supposed to de-politicize judicial elections, insulate judges from public opinion, and foster independence. But increasingly competitive campaigns have made these individuals uniquely vulnerable to popular dissatisfaction. If reformers want to spare judges from public backlash, the most appropriate prescription is likely one of two extremes: Either eliminate these elections altogether or embrace fully competitive, partisan contests. Neither is very likely to happen.

Judicial elections are commonplace both today and have been throughout American history. And while the institution of electing judges has always had its critics, an evolving electoral landscape near the end of the 20th century renewed calls to abolish this practice.

The move towards retention elections to reduce partisanship

From the 1980s to the mid-2000s, judicial elections became more frequently contested, more competitive, and more expensive. While much of this trend can be attributed simply to a partisan realignment occurring throughout the southern United States, its practical payoffs were significant.

During this period, judicial candidates, political parties, and special interest groups increasingly emphasized candidates’ policy positions on issues like crime rather than their professional qualifications. Television advertising also became more widespread, including the use of attack ads. In short, judicial elections became, “nastier, noisier, and costlier.”

Unfortunately for these reform advocates, citizens are not keen to relinquish their right to vote on judges altogether. For example, in Nevada, voters rejected constitutional ballot amendments to eliminate the popular selection of judges in 1972, 1988, 1992, and again in 2010. Reform advocates understand this obstacle, which is one reason they threw their support behind the so-called “merit plan” to begin with.

Popularized in the latter-half of the previous century, the merit plan requires nominating commissions to present a list of candidates to an appointing elite (like the governor), who then selects a judge from that list. After a prescribed period of time (say, ten years), a judge stands for retention. Retention elections are nonpartisan, allow no formal challengers, and permit citizens merely to vote “yes” or “no” for another term of office. In the event of a “no” vote, the process begins anew.

Retention elections are popular among reform advocates because they eliminate popular selection of judges entirely while maintaining token aspects of electoral accountability intended to appease voters. According to one member of the legal academy, “Retention elections are designed to minimize the risk of non-retention, by stripping elections of features that might inspire voters to become interested enough to oust incumbents.”

Politics Out. Judges In by Phil Roeder is licensed under CC-BY-2.0.

Retention elections have largely accomplished these goals. It’s not uncommon for more than one-quarter of voters who have already turned out to the polls to simply abstain from retention elections altogether. And among those who do participate, over 70 percent on average vote to retain incumbents. According to political scientist Larry Aspin, between 1964 and 2014, only 10 judges on state supreme courts failed to win their retention elections.

While judicial elections in non-merit plan states were transformed by money, advertisements, and other factors leading up to the mid-2000s, retention elections were largely spared this trend. As Figure 1 shows, between 2002 and 2009, 93 percent of incumbents on state courts of last resort spent no money whatsoever on their retention campaigns. Ninety-eight percent of all such elections had no television advertising affiliated with them. And 95 percent of all justices were unopposed by outside interests such as political action committees.

Retention elections have become partisan since 2010

But things started to change in 2010. Partly due to unpopular judicial opinions and the widespread backlash associated with the Tea Party movement, state supreme court justices increasingly came under attack from grassroots organizations urging “no” votes on their retentions. Likewise, a liberalized campaign environment in which special interests could play a more influential role led to groups like Citizens United and Americans for Prosperity opposing incumbent judges largely due to their support for punitive tort awards.

This new campaign environment dramatically changed the way in which retention elections took place. Between 2010 and 2014, 35 percent of all justices on state courts of last resort faced an opposition campaign urging their ouster. Over one-quarter of these elections featured television advertising, thousands of which attacked justices in negative ads. And incumbents, looking to stave off the damage caused by these attacks, increased their campaign spending by over 400 percent compared to the previous decade.

This flurry of campaign activity has had a clear effect on state Supreme Court retention elections. Since 2010, rates of voter abstention have declined by over 20 percent, and incumbent justices have seen their average rates of support decline by eight percent. The effects are even more pronounced in retention campaigns drawing opposition efforts. Justices who have had televised attack ads aired against them lose approximately 24 percent of their support compared to those facing no such opposition.

It’s true that opposition campaigns have only unseated a handful of state Supreme Court justices. But the fact that these campaigns are becoming more competitive will likely have important consequences for the disposition of justice. Research shows that judges are more likely to cater to public opinion when their decisions become fodder for campaign attack ads or are covered by local media. And without party labels, voters are more likely to cue off of the information they glean from sensational advertisements.

Retention elections for state courts of last resort increasingly resemble the cost and tone of the very elections they were meant to get away from—partisan, competitive contests. But, justices facing retention elections are uniquely vulnerable to coordinated attacks considering they don’t run on a party label, are professionalized to shun electioneering, and must often run against, not a specific opponent, but popular dissatisfaction with the direction of government in general.

It is unclear whether retention elections will continue to become more expensive and combative. If they do, judges will likely lose some elections, and others, fearful of a loss, will be more likely to pander to public preferences—precisely the outcomes reform advocates wanted to avoid in the first place when they instituted the merit plan.

To avoid these issues, states have a few options. They could abandon elections altogether and create institutions that guarantee life tenure for their judges like those in the federal government. But we know that voters are unwilling to surrender their right to vote on judges, so this option is unlikely to happen.

Alternatively, policy-makers could lean into these newly competitive campaigns and reintroduce partisan elections. Political science research finds that party labels help to combat judicial pandering and may even help to shield incumbents from attack advertising. But reform advocates are unlikely to embrace this option given their historical distaste for such institutions.

The upshot is that special interests and grassroots organizations will almost certainly continue their efforts to unseat judges who don’t reflect their political values. And so long as these efforts are well-financed, a decent number of will lose their retention bids, pander to avoid losing, or simply quit to avoid either of the former two. These are the sorts of outcomes the merit plan was supposed to avoid.

David Hughes – Auburn University at Montgomery
David Hughes is an assistant professor of political science at Auburn University at Montgomery. His research interests center upon law and courts, state politics, and political communications. His most recent research includes “Does Local Journalism Stimulate Voter Participation in State Supreme Courts?” which is forthcoming at the Journal of Law and Courts and “New-Style Campaigns in State Supreme Court Retention Elections,” which is forthcoming at State Politics & Policy Quarterly. He tweets at @davidhughes_phd 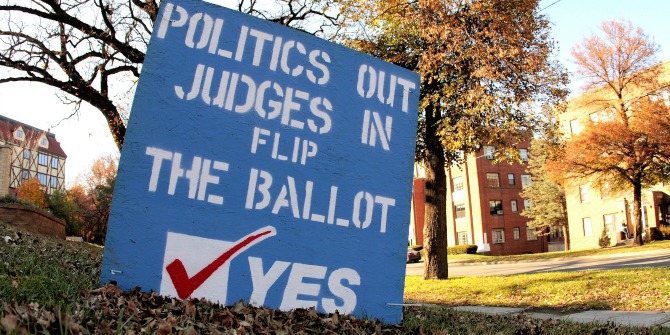