President Joe Biden’s first 100 days in office have been marked by bold legislative objectives. Against the backdrop of an expansive $1.9 trillion COVID relief bill, a proposed $2 trillion infrastructure bill, and a new $1.8 trillion American Families Plan, some experts have even drawn comparisons to Franklin D. Roosevelt and the New Deal. In this Q&A, Thomas Gift discusses whether those comparisons are merited, how Biden’s economic agenda is shaping up, and why it may be “now or never” for the White House to push through a raft of progressive policies.

Some experts claim that Biden’s first 100 days in office have been reminiscent of Franklin Roosevelt (FDR) and his New Deal policies of the 1930s. Is there any merit to this?

Attempts to draw these parallels are understandable, and there’s little doubt that Biden’s $1.9 trillion COVID relief package—both in terms of its scale and ambitions—is reminiscent of New-Deal-era policies. The White House has correctly (but, in my view, unwisely) hailed the bill as the most progressive piece of legislation in a long time. So, it’s inevitable that those comparisons will be made. Still, one bill doesn’t make Biden the reincarnation of FDR. There’s enormous time left during Biden’s first term, and history could reveal a much different picture of “Bidenomics” in four years. Perhaps the best test of Biden’s commitment to expansive federal spending will be how much he’s willing to compromise (or not) on his proposed $2 trillion infrastructure bill and new $1.8 trillion American Families Plan.

Is there any way in which “Bidenomics” represents a move away from conventional economic wisdom in Washington?

It depends on what’s meant by “conventional economic wisdom.” If it largely implies a belief in limited government involvement in the U.S. economy, attention to the deficit, moderate to low taxes, and a hawkish focus on inflation, then it’s clear Biden is taking a different tack. But Biden hardly started this shift away from a more neoliberal economic orthodoxy. It’s been brewing for some time—and not just among Democrats. Despite all the hand-wringing about partisan polarization in Washington, and rhetorical nods by the GOP to rein in the debt, both Democrats and Republicans have (at least when their party holds power) been perfectly happy for the federal government to spend more dollars than in takes in. That includes Bush the Second, Obama, Trump—and now Biden. 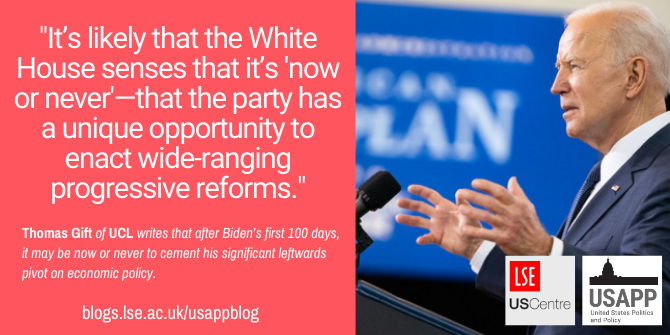 Even so, are you surprised at all by the scale of Biden’s proposed spending?

Biden ran as a centrist, so it’s obvious why many conservatives claim that his early policies—such as the pandemic relief bill and his infrastructure proposal—fall short of that promise. But maybe we shouldn’t be too surprised. Biden’s leftward lurch likely reflects the changed composition of Congress resulting from the Senate runoff elections in Georgia, which gave Democrats control of both chambers. Few experts expected that result, and it’s given Democrats more of a chance to push through legislation (including through budget reconciliation) than most initially thought feasible. So, it’s likely that the White House senses that it’s “now or never”—that the party has a unique opportunity (and a narrow window) to enact wide-ranging (and durable) progressive reforms.

What do you expect from Biden’s economic agenda going forward?

Biden used up much of his political capital with the COVID-19 relief bill, which passed along party lines via budget reconciliation. That will make pushing through other ambitious initiatives more difficult. It’s unlikely that moderate Democrats, including West Virginia Senator Joe Manchin, will allow future Biden-endorsed bills to get passed without good-faith efforts by the administration to reach across the aisle and compromise. Looking ahead, the fact that Democrats might not control both chambers of Congress following the 2022 election would surely stymie Biden’s legislative goals. Over the spring and summer, I’ll mostly be looking at negotiations over the infrastructure bill. Biden faces a tough balancing act—getting Republicans (and moderate Democrats) onboard, while preventing a backlash among progressives.