In an era of stagnant wages for the middle-classes, the financial services industry continues to be very well remunerated, especially in large cities. But to what extent does city-size drive wage inequalities? In new research that tracks the movement of over 20,000 skilled financial workers across 264 US cities between 2007 and 2011, Kuo Siong (Gordon) Tan constructs a financial human capital network. He finds that the network contains 40 financial hubs, which are linked to higher wages. He writes that rather than being a direct function of city size, wage inequality may be more pronounced between cities that are highly networked and those that are not.

Income inequality, which is worsening in the United States, has naturally become a recent hot topic that is fiercely debated by potential Presidential candidates. With memories of the recent subprime mortgage crisis close behind us, there remains a strong wave of criticism against big banks, hedge fund managers and investment bankers, who are under scrutiny for their oversized paychecks and generous bonuses.

In an industry where excessive risk-taking is rewarded handsomely, it is little wonder that this group of financial elites also happens to be among the highest paid professions. As Paul Krugman noted in his article in the New York Times:

“The upper tiers of the income distribution are overwhelmingly occupied by executives of one kind or another — corporate, finance, real estate, and lawyers who are surely more corporate than Perry Mason. And even the biggest names in media aren’t real players. Remember, the 40 top-paid hedge fund managers and traders made an average of more than $400 million each in 2012”.

Researchers studying the urban wage premium phenomenon have observed that bigger cities and more urban areas tend to pay higher wages. They have cited access to job opportunities, the ability to learn, innovate and upgrade skills, and even the presence of amenities such as museums and restaurants, as factors that contribute to urban wage inequality among cities. In many of these studies, city size, as measured by the population of its inhabitants, is commonly used to measure these factors that drive wage inequality.

In new research, we think about wage inequalities differently by focusing on each city’s networked position within the US financial human capital system. We found that city size may be less important than networked positionality in influencing income inequality. A bigger city may not always offer higher wages once we consider the cost of living and the level of amenities. However, a more networked city will offer higher wages even after accounting for living costs and amenities. Wages may continue to be low for cities that are located on the periphery of this financial human capital network unless measures are taken to widen their human capital neighborhood.

Skilled financial workers are an interesting group because of their high mobility. Their movement from one city to another in search of better job prospects (and higher wages) results in the transfer and circulation of knowledge, contacts, information and other resources, which are embodied in these workers. Their relocation across the US gives rise to greater innovation, knowledge spillovers and increased firm efficiency.

Using public data from the American Community Survey, we constructed a financial human capital network that reveals a core-periphery pattern by tracking the movement of over 20,000 skilled financial workers across 264 US cities between 2007 and 2011. The occupations examined included financial managers, fund managers, financial specialists and credit and loan analysts, among others.

Figure 1 shows the spatial pattern of financial hubs and peripheries, where the thickness of the lines indicate the strength of the connections. The direction of the lines, read in a clockwise manner, show the movement of workers from the originating city to the destination city. The bigger the size of the node, the more central is its position within the network. 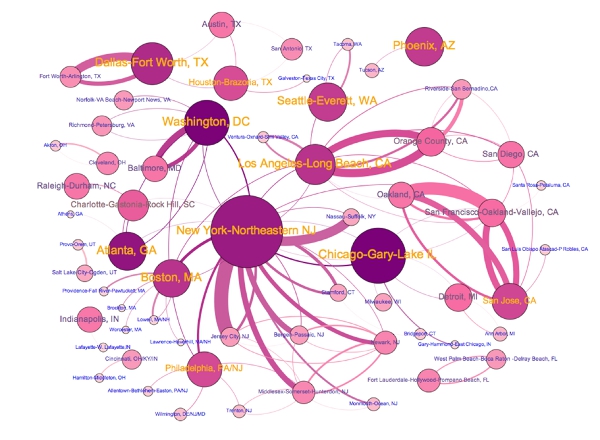 Each city serves as a node in the system and can be relatively connected or disconnected. We call the connected cities “hubs” (or “core”) and the disconnected ones “periphery”. The hubs enjoy strong linkages with many other cities and occupy a strategic position in the network, whereas the periphery have only sparse connections with few cities and face the danger of geographical isolation from the human capital network when these few linkages are broken.

We identified 40 financial hubs in the network. Not surprisingly, New York City commands the top spot by virtue of its status as a global financial center. The other hubs are also major urban areas e.g. Los Angeles, Washington, D.C., Dallas, Boston, Chicago and San Francisco. Interestingly, the strongest connections of these hubs to other cities tend to be regional. Even New York City’s strongest linkages are with neighboring cities like New Jersey and Massachusetts.

In addition, we found a secondary group of “island hubs”, where linkages are less geographically expansive and are predominantly confined to a few cities e.g. Seattle, Phoenix, Atlanta and Georgia. To more clearly distinguish the primary hubs from the island hubs, we focus on the network neighborhood for the three largest financial hubs in the US, namely, New York City, Los Angeles and Dallas, as represented in Figures 2a-c. 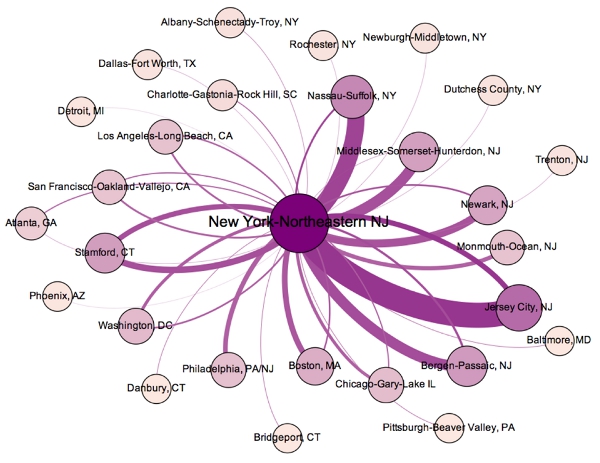 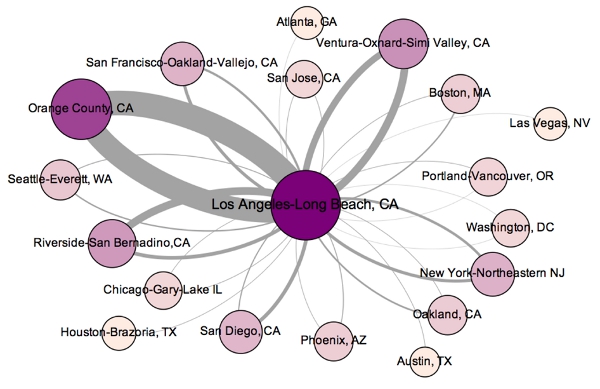 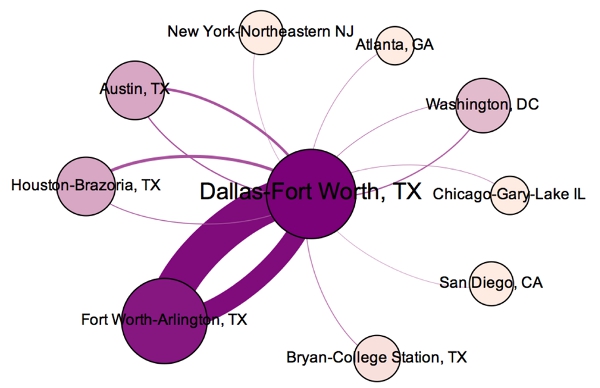 New York City and Los Angeles have a large neighborhood size due to their numerous national connections, whereas the majority of Dallas’ direct connections occur within Texas. Nonetheless, all three hubs have sizeable neighborhoods and are characterized by some level of extra-territorial, extra-urban human capital networks.

Our regression results support previous findings of an urban wage premium, that is, wages are higher for large cities. More importantly, the results also suggest that a wage premium exists for financial hubs. This implies that wage inequality may be more pronounced between cities that are highly networked and those that are not.

Overall, our results show support for a networked city wage premium. While it may be interesting to see if such a premium holds for other occupations, our present analysis suggests that there are adverse wage implications for peripheral cities that are isolated from human capital networks.

This article is based on the paper, ‘Wage inequality between financial hubs and periphery’, in Applied Geography.