Tackling inequality has become a clarion call for politicians on both the right and the left. But in order to address the problem, we need to have better insights into how the current levels of economic equality became so entrenched. In new research which examines nearly 100 years of data, Nathan J. Kelly and Eric Keller find that financial deregulation has contributed to America’s dramatic shift toward greater income concentration. They write that for most of the 20th century, Democratic control of the Senate made financial regulation more likely, but that from the 1980s, onwards, partly due to growing campaign contributions from the financial sector, the party converged with the Republicans’ neoliberal enthusiasm for deregulation.

After years of increasing economic inequality with little in the way of a political response, Democrats from Barack Obama to Elizabeth Warren are talking about the problem more than ever. On the other side of the political spectrum, Republican presidential candidates are also acknowledging that the income gap is a serious problem.  Economic inequality is back on the U.S. political agenda. But identifying the proposals most likely to reduce inequality requires a clear understanding of the factors that push inequality up and down, and such an understanding should be based on the best possible evidence and analysis.

Examining nearly 100 years of data, and accounting for a variety of alternative explanations, we find (ungated) that financial deregulation has contributed to America’s dramatic shift toward greater income concentration. This finding pokes a hole in the view that government regulations always and everywhere benefit regulated industries. To the contrary, our analysis suggests that regulation of the financial sector that began in the New Deal era helped to temper the unequal flow of prosperity to finance executives that has become the new normal in America’s economy.

But how did financial deregulation happen? What role did partisan politics play? We answer these questions by exploring the relationship between partisan control of Congress and the presidency and the path of financial deregulation over time. We find, surprisingly in the context of party polarization, that the parties converged on financial deregulation beginning in the early 1980s. From 1914 to 1982, one can predict the path of financial regulatory policy by accounting for which party is in charge of the Washington policymaking apparatus (especially the Senate). Deregulation was less likely when Democrats had more power in Washington. But that pattern disappears after 1982, with Democrats and Republicans adopting a neoliberal orientation and becoming indistinguishable in terms of the policy outcomes they produce.

Distributional Effects of the Deregulatory Consensus

In Figure 1 we imagine a world in which Republicans controlled the Senate from after World War II until the early 1980s. The chart includes a solid line depicting the actual path of top income share and a dashed line showing the path of income inequality predicted by our models had Republicans controlled the Senate for the entire period. We see that income concentration, due to deregulatory policy change, would likely have increased much sooner than it did in reality. We estimate that the top 0.01% of tax units would have more than doubled its share of national income by 1983 – billions of dollars in total – reaching a national income share not actually observed until around twenty years later. 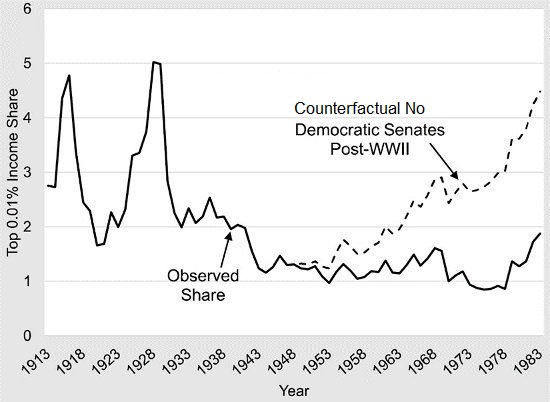 The partisan effects shown above were only present prior to the 1980s. It is tempting, therefore, to conclude that partisan politics had no effect on the dramatic rise of economic inequality since the early 1980s. Figure 2 shows, to the contrary, that partisan convergence on financial deregulation has contributed to the increase in inequality. We consider a hypothetical world in which the parties continued to diverge on financial deregulation to the same extent after 1981 as they did before. Had partisan divergence on deregulation been maintained after 1982, our estimates indicate that top income shares would currently be approximately 1.15 points lower.

Figure 2 – What if the Parties Never Converged? 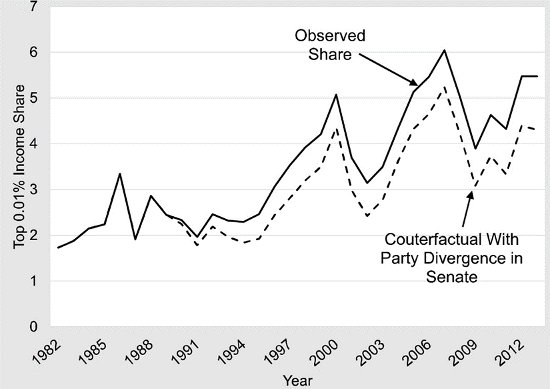 This effect is much smaller than the effect charted in the first figure, but is still considerable given that it represents more than a 20 percent reduction in top income shares relative to the observed level in 2012. Additionally, even a 1 point reduction in top income share represents billions of dollars. While it is clear that inequality would have moved substantially higher with or without partisan convergence on financial deregulation, partisan convergence has contributed to rising inequality over the past three decades.

We conducted a preliminary analysis of four potential factors that could have contributed to the shift of Democrats toward Republicans on financial deregulation – globalization, the increasing availability and need for credit, shifting sources of campaign finance, and the decline of unions in the interest system. The only factor that appears completely unrelated to partisan convergence is the decline of unions.

When trade openness decreases, Democratic strength reduces deregulation. This result is consistent with the idea that the parties converged as the U.S. was more exposed to the global economy.

We also found some evidence that partisan convergence was enhanced by changes in campaign finance. In an analysis of roll-call voting on repeal of Glass-Steagall, the core financial regulatory legislation of the New Deal era, we found that members of Congress who receive more donations from the finance sector were much more likely to support repeal. We also learned that as finance sector contributions increased, Democrats actually became more likely than Republicans to support repeal.

What Did We Learn?

For most of the 20th century, when Democrats had more strength in policymaking institutions, financial regulation was more likely and deregulation was less likely. These differences in policy outputs produced less inequality as Democratic strength increased and more inequality as Republican strength increased. But after 1982, rather than providing policy alternatives designed to reduce income concentration Democrats became essentially indistinguishable from Republicans when it comes to financial deregulation.

Without political parties that provide substantive policy alternatives, voters will find it difficult to influence distributional outcomes through the political process. Our results suggest that building an economic model that is less reliant on credit might reduce the incentives that pushed Democrats toward Republicans on financial deregulation. To the extent that changes in campaign finance have contributed to partisan convergence, modifications in how campaigns are regulated and funded could hold promise. But there is no simple policy solution to overcoming the effects of globalization. While it should be noted that globalization has likely produced many good outcomes, one side effect may have been partisan convergence on financial deregulation, which then contributed to rising inequality.

It is a noteworthy development that politicians from both parties have begun to acknowledge economic inequality as an important societal problem. Our work both helps to place the current debate in historical context and suggest paths that policymakers could take to achieve their objective. With regard to historical context, we would draw attention to the fact that Democrats converged with Republicans on financial deregulation, which implicates both parties in the creation of America’s New Gilded Age. With regard to policy options moving forward, our work makes it clear that any serious proposal to reduce economic inequality should at least consider the role of financial regulation.

This article is based on the paper, ‘Partisan Politics, Financial Deregulation, and the New Gilded Age’, in Political Research Quarterly.