US Citizens have a right to vote in federal elections in their former states even if they have permanently left the country. Brian Kalt argues that this right, and the Uniformed and Overseas Citizens Absentee Voting Act from which it flows, has constitutional problems given that those who have left are no longer ‘people of the state’. He writes that Congress cannot simply rewrite states’ voter-eligibility requirements as it pleases. He suggests that to address the problem, Congress could establish territory-style representation in the form of non-voting House delegates or piggyback reforms on to the proposed National Popular Vote Interstate Compact.

Eligible voters who have left the U.S. permanently can vote in federal elections as though they still live at their last stateside address. They need not be residents of their former states, or be eligible to vote in state and local elections, or pay any state or local taxes. The Uniformed and Overseas Citizens Absentee Voting Act (UOCAVA), enacted in 1986, forces their former states to let them vote for President, Senate, and House this way.

This is unconstitutional and should be changed. I am sympathetic to my fellow citizens who have given up their stateside residences but prize their voting rights; I argue that Congress can best address these constitutional problems by expanding voting rights rather than reducing them.

UOCAVA has many constitutional deficiencies. Voting for Congress is supposed to be a matter not just of citizenship but of place, but UOCAVA sprinkles millions of voters into states and districts that are no longer their places.

As for presidential elections, states choose for themselves how to cast their electoral votes. Congress cannot simply rewrite states’ voter-eligibility requirements as it pleases. Of course, there are constitutional provisions that hem in the states here—they cannot deny the vote on the basis of sex, or race, and other such things. But denying the vote on grounds that someone no longer lives in the state violates no such provisions.

When Congress debated the Overseas Citizens Voting Rights Act (OCRVA) in the 1970s—UOCAVA’s predecessor, which first set things up this way—it thought it could act because of its power to protect citizens’ rights to vote and to live where they pleased. Despite constitutional objections from some members and from the Department of Justice, the law’s proponents felt that these rights trumped any technicalities. (That view did not carry the day; instead, there was a general sense that members should just pass the law and leave consideration of the Constitution to the courts. It is forty years later, though, and no court has spoken on the issue.)

The rights to vote and to live where one pleases are certainly important. Congress has a general power, under Section 5 of the Fourteenth Amendment, to vindicate rights like these. Indeed, just before OCVRA’s enactment, the Supreme Court approved voting legislation that protected federal voting rights for people who moved interstate just before an election. But by applying overseas, and forever, OCVRA went too far. For OCVRA to come under Congress’s Section 5 power it would have to be a Fourteenth Amendment violation for states to preclude former residents from voting—and it isn’t.

One stark contrast makes this clear. If my rights as a U.S. citizen to vote in federal elections and to live where I please are so sacrosanct, why do my fellow citizens who live in Washington, D.C. not have a right to vote for Congress? Why do U.S. citizens in Puerto Rico, Guam, American Samoa, and the U.S. Virgin Islands have no right to vote for Congress or for President?

There was one other Section 5 justification for OCVRA: equal protection. Before OCVRA, most states—encouraged by earlier federal laws—chose to allow overseas military personnel, federal employees, and their dependents to vote at their stateside addresses. They typically did not extend this courtesy to private expatriates, though, and OCVRA prevented the states from continuing such disparate treatment. But while Congress had the power to prevent such disparate treatment, it lacked the power to do so this radically. States can be forced to be even-handed to absentee voters without being forced to treat permanent expatriates as quasi-citizens for life.

One possibility would piggyback on the National Popular Vote Interstate Compact (NPVIC), a clever suggestion for switching to a national popular vote that has recently gained momentum. The NPVIC leverages the states’ ability to decide how to allocate their own electoral votes; member states agree to award their electoral votes to the winner of the national popular vote, but only when enough states to constitute a majority of the Electoral College have signed on. If the NPVIC passes, or if Congress gets in front of it and passes a constitutional amendment to institute a national popular vote for President, it would present a perfect opportunity to discuss the proper scope of who gets included in the national popular vote. It would be an optimal time, in other words, to give proper presidential voting rights to permanent expatriates and citizens living in the territories.

This article is based on the paper ‘Unconstitutional But Entrenched: Putting UOCAVA and Voting Rights for Permanent Expatriates on a Sound Constitutional Footing’, in the Brooklyn Law Review.

Brian Kalt – Michigan State University
Brian Kalt is Professor of Law & the Harold Norris Faculty Scholar at Michigan State University. Before coming to MSU College of Law, Professor Kalt worked at the Washington D.C. office of Sidley and Austin in one of the top appellate law practices in the country. He has also served as a law clerk for the Honorable Danny J. Boggs, U.S. Court of Appeals for the 6th Circuit. Professor Kalt’s research focuses on structural constitutional law and juries.

Posted In: Brian Kalt | Democracy and culture | Elections and party politics across the US 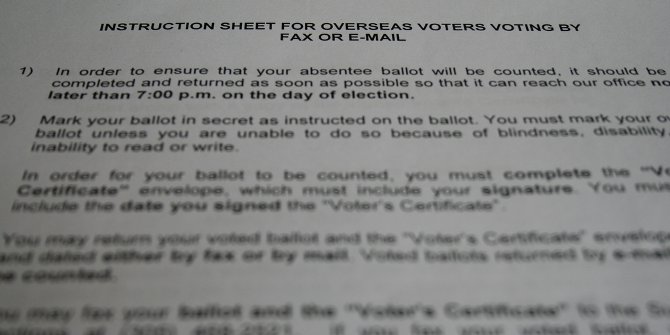