Even as the summer draws to a close, Donald Trump’s domination of the Republican primary polls shows no sign of abating. If Trump was to be elected president next year, Richard Brodsky writes that he would be only one of four Republicans to ascend to the office with no previous elected experience. He writes that while Trump’s inexperience has been turned into a virtue, if elected, he will still have to contend with the constraints of the Constitution.

Quick:  How many Presidents held no previous elected office?

Four.  Two war hero generals, Grant and Eisenhower (Washington was an elected Delegate to the First Continental Congress). Two one-termers, Taft and Hoover.  All Republicans.  Americans, it seems, are willing to consider voting for a real outsider, but not a political or governmental neophyte.

Comes now the Donald.  Accept, for the moment, every one of his self-described virtues.  Business success, decisiveness, candor and outspokenness.  Is the lack of experience with democratic government a real problem?  It is likely to be a serious problem for him, because it is likely to bother voters.

Eisenhower is the most recent, but not the best, comparison.  He had enormous political experience within the democratic institutions of American government, and internationally as the head of a fractious coalition that included Stalin, Churchill and DeGaulle.

Grant, Taft and Hoover are not much better, all served in government and knew the ins and outs of American politics.  Trump is unique in the way other unsuccessful presidential candidates like Wendell Wilkie, John Davis and Ross Perot were.  Not being part of the political establishment has been Trump’s great strength and is likely to be his ultimate weakness.

He has offered voters a vision of the Presidency that he is uniquely qualified to fill.  “Get out of my way”, “I’m in charge”  “You’re fired”.  It is good TV (I’m told).  It’s probably unconstitutional and unworkable. 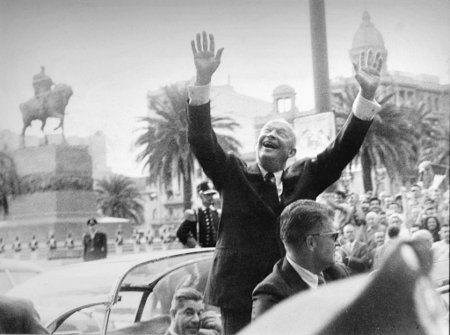 The great virtue of our constitutional system is that the power of any single person or institution is confronted by the power of other people and institutions.  Call it “Checks and Balances” or “Separation of Powers” it is the great gift of Madison and Jefferson to civil society.  No one gets to exercise unfettered power.

There is enormous political power in the image of President Trump as Alexander the Great cutting the Gordian knot of Washington with a single stroke of his mighty sword. A lot of Americans want no part of two political parties they view as equally corrupt and out-of-touch.  The know that money controls the government. They want more than someone they agree with; they want a transformational personality who will sweep away the detritus of a failed system. That’s the heart of the late-2015 Trump surge. 2016 will test more than the Donald.  It will require the American people to think this thing through.

Trump v. The Constitution?  Well, yes.  Can he keep his policy and political commitments within the existing constitutional framework? Probably not.

Consider President’s Trump’s reaction to a Congress that won’t approve the Great Wall of Mexico.  Or a Supreme Court that affirms that citizenship status of children born on U.S. soil to non-citizen parents.  Smarter people than Trump had problematic reactions ( See FDR, Court-packing).  He is likely to fall back on attack rhetoric and finger-pointing which can work for a candidate but nor for a President.

In fact, this is the great unasked question of the Trump surge.  “How will you do all of this if the Congress or the Courts disagree?”  Expect a grin and a parry at first.  But persistent questioning by press or competitors will eventually make this a central question, especially for voters not on the nativist, right-wing fringe, but looking for a candidate who can really shake things up.

Eisenhower he’s not.  But Trump’s inexperience has been turned into a virtue.  His outsider status is his essential appeal. He has a solid third of the Republican Party. But can he govern? The chattering classes have been more willing to laugh at him and dismiss him than to take him seriously and ask the right questions.

If those questions get asked we will find out if voters care whether he can govern.   Who will raise the issue in a politically effective way?