The US system of government means that the states have to implement federal policies at the local level. In new research which uses the federal Weatherization Assistance Program as a case study, Jessica Terman looks at the influence of preexisting state regulatory environments on the implementation of federal programs. She finds that although state and federal programs can have similar goals, in practice, they may impede the performance of one another.

In an era of grassroots politics, there is a certain appeal to having federal policies implemented by lower levels of government. States and localities are well placed to tailor federal programs to the preferences and needs of their residents. One need only look to President Obama’s Affordable Care Act as an example of the tension between far-reaching federal programs and individualized state preferences. As such, many governments in federalist systems have handed off their implementation responsibilities to lower levels. Previous research has explored the choices that states make with federal dollars in terms of resource allocation across different policy areas. However, there is very little research on how preexisting state policy environments influence the actual implementation performance of federally funded, state implemented programs. Using the federally funded, state implemented Weatherization Assistance Program (WAP), I investigate the relationship between preexisting state regulatory environments and federal program performance.

Figure 1 – Weatherizations planned that were completed 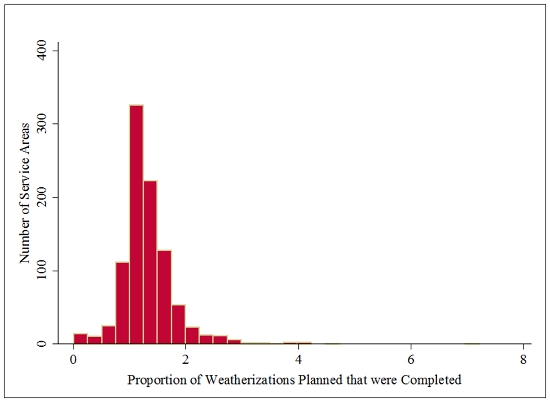 State regulations, such as building standards or utility performance incentives, are energy efficiency policy tools. They can build state implementation capabilities and capacity in ways that facilitate or impede the implementation and performance of federal programs. Among a number of state energy efficiency regulatory policies, I theorize that state spending on gas/electric energy efficiency programs facilitates WAP performance by developing the internal infrastructure to get consumers to voluntarily change their behavior because they focus on getting consumers to directly reduce their energy use through incentives offered by public agencies. One example of this facilitation is California’s program that requires municipal utilities to offer solar incentives to ratepayers – the total municipal investment is upwards of $784 million.

On the other hand, state programs may impede federal program performance by preempting federal program goals. This preemption can result from state programs whose purpose overlaps substantially with federal programs or from the outsourcing of state resources, which starves states of necessary implementation resources. In the context of energy efficiency, two policy tools that impede federal program goal achievement include: (1) heightened building energy codes and (2) regulatory decoupling. While seemingly effective policies on their own, state building energy codes have the potential of impeding WAP goal achievement because it will become more difficult to find residences that require weatherization. This is because residences in states with heightened building codes will to be sounder in terms of weatherization (i.e. more sophisticated caulking, etc.). In other words, building codes may preempt weatherization and achievement of WAP performance goals.

Of the state programs that were tested in the analysis, state per capita spending on electric and gas efficiency programs had a positive effect on federal program performance in the WAP. On average, the proportion of weatherizations planned that were completed by a given state increases by 2 percent with a one unit change in public spending on electricity and gas energy efficiency programs. The nature of this spending is such that it reinforces public involvement and focus on energy efficiency and conservation programs. This is a particularly interesting finding when contrasted with the other state regulations in the context of energy efficiency.

The results described above provide a more nuanced understanding of local implementation of federal programs. On their own, state regulations may be effective mechanisms for enhancing energy efficiency; however, the imprint that they leave on the state’s capacity and infrastructure may actually impede federal goal achievement in WAP. This should give policymakers at both the state and federal level pause in terms of how they allocate state resources. The next step in this research is determining the appropriate threshold and resource allocation for successful implementation of federal programs. With additional information on how state and federal policies compliment (or conflict with) one another, federal resources can be allocated with more fruitful program results.

This article is based on the paper, ‘Performance Goal Achievement in Fiscal Federalism: The Influence of State Partisan Environments and Regulatory Regimes’, in the Policy Studies Journal.

Jessica Terman – George Mason University
Dr. Jessica Terman is an Assistant Professor in the School of Policy, Government and International Affairs at George Mason University.. Her research focuses on implementation issues in public management. She is particularly interested in the tools of third-party governance such as the use of intergovernmental grants and contractors. Her most recent work looks at the integration of federal and state policy tools as they relate to energy efficiency and sustainability programs. She has also published on bureaucratic policymaking and procurement activities in the context of state government.