Lack of a car is more important to elderly residents of food deserts than lack of a nearby supermarket.

Lack of a car is more important to elderly residents of food deserts than lack of a nearby supermarket.

New policies at the local, state, and federal level seek to address the problem of food deserts because living far from a supermarket is thought to be related to food hardship and unhealthy eating patterns. In new research, Katie Fitzpatrick and co-authors find little evidence that living in a food desert affects food-related distress among the elderly. Rather, transportation difficulties are more important than limited access to a grocery store. Elderly individuals residing in a food desert without a vehicle are 12 percentage points more likely to report experiencing food insufficiency than food desert residents with a vehicle. Additionally, SNAP recipients living in food deserts are 11 percentage points more likely to receive Meals on Wheels.

More than 18 million people, including almost 5 million elderly, lived in a food desert in 2010. The U.S. Department of Agriculture (USDA) defines a food desert as a low-income area where many residents do not live close to a supermarket. Residents of food deserts face many obstacles in consuming nutritious food, ranging from fewer local stores with healthy food, higher food prices at smaller local grocers, and the time and expense of travelling to a supermarket. As a result, living in a food desert may not only affect the quality of one’s diet, but also the ability to purchase food and other necessities and the need for public food assistance programs.

Compared to other groups, elderly individuals may be particularly affected by food deserts: strong neighborhood ties encourage them to stay in a community even after businesses leave, fixed incomes make paying higher food prices difficult, and physical limitations limit travel. As new policies, ranging from new supermarket development to mobile fruit and vegetable retailers, improve food access for residents of food deserts it is important that they address the needs of the large and growing elderly population.

To understand the relationship between food deserts and both food and material hardship, in new research, we used the 2006 and 2010 Health and Retirement Study (HRS). We selected individuals in the 2006 survey that were: age 60 and older, surveyed in the 2010 HRS, living in urban areas, and had income at or below 200% of the Federal poverty line. We then matched information on where these individuals lived to data on food deserts in 2006 and 2010. 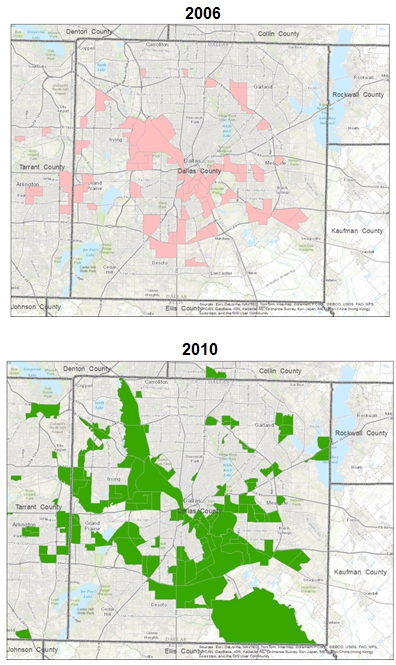 Figure 2 –  Average Experiences over the Previous Two Years of Sample of Elderly Individuals, by Food Desert Status and Year 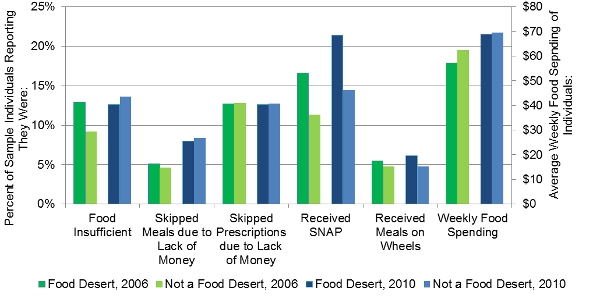 We estimate these relationships, controlling for characteristics of the individual and their local area. As in the simple averages, we find little relationship between living in a food desert and experiences of hardship. We only find only that food desert residents are 4.1 percentage points less likely to receive Meals on Wheels than otherwise similar individuals, perhaps suggesting that they have less access to non-profit meal providers.

Living in a food desert, with or without a vehicle, is not related to other hardships we measure. In fact, participating in Meals on Wheels appears more related to transportation difficulties than living far from a supermarket: individuals without a vehicle are 9 percentage points more likely to receive Meals on Wheels, regardless if they live in a food desert or not.

The importance of transportation burdens

Our results indicate that transportation burdens may be more important in determining food and material hardship than whether a senior lives in a food desert. Thus, tackling the problem of food deserts requires greater attention to transportation needs. For example, providing a ride to a supermarket or expanding food delivery for elderly food desert residents may improve their well-being.

Additionally, Meals on Wheels may be helping those lacking a vehicle or who receive SNAP but live in a food desert. If food deserts encourage older Americans to shift from entitlement programs like SNAP to non-entitlement programs such as Meals on Wheels, those at-risk for hunger will be more vulnerable to both the Congressional budget process and the ability of non-profit food providers to meet their needs. This relatively overlooked food safety net program may require additional attention and support.

This article is based on the paper, ‘The Impact of Food Deserts on Food Insufficiency and SNAP Participation among the Elderly,’ authored by Katie Fitzpatrick, Nadia Greenhalgh-Stanley, and Michele Ver Ploeg in the American Journal of Agricultural Economics.

Katie Fitzpatrick – Seattle University
Katie Fitzpatrick is an Assistant Professor of Economics at Seattle University. Her current work focuses on the effectiveness of the Supplemental Nutrition Assistance Program (SNAP), formerly the food stamp program; the causes and consequences of food insecurity; and, the use of mainstream and alternative financial institutions.