Economic growth means more road injuries in less developed countries, but fewer in those which are highly developed.

Economic growth means more road injuries in less developed countries, but fewer in those which are highly developed.

Many studies have shown that there is a u-shaped relationship between road deaths and economic growth, with fatalities increasing and then decreasing as economic growth rises. In new research, Law Teik Hua finds that this relationship also holds for non-fatal road injuries in developed countries, but not in countries which are developing. He writes that an increasingly urban population, more road vehicles, and a greater number of elderly people were all likely to decrease the number of road injuries in developed countries, but do the opposite in developing countries.

Recently, numerous studies have shown that there is an inverted U-shaped relationship between road deaths and economic growth. That is, road deaths increase at lower income levels, but decrease once the number has exceeded a certain threshold. This relationship is also known as the Kuznets curve and has been explained by several studies to be the result of changes in the fundamental development of a country. This includes changes in variations in rates among vulnerable non-motorized road users, advances in medical services, the quality of political institutions, income equality and road safety policies.

The Kuznets curve hypothesis for road safety can be supported by three theoretical explanations: the scale of economic activities, changes in vehicle composition, and a surge in demand for better road safety as per-capita income rises. It contends that the number of road deaths increases initially as a country’s economy develops, owing to the fact that the growth of a country’s economy is accompanied by a corresponding surge in demand for transportation services.

The composition effect depicts the change in vehicle composition as a country’s economy grows. This involves a change from low-threat and high-risk transport modes (such as pedestrians and bicyclists) to high-threat and low-risk motorized vehicles. In the initial stage of economic development, the total road death risk initially increases for the reason that an increase in the number of motorized vehicles can pose an increasing threat to the predominantly more vulnerable transport modes, such as cyclists and pedestrians. Nevertheless, at higher levels of economic development, when a majority of the commuting population are less vulnerable motor vehicle occupants, there is an increase in the number of motor vehicles causing a reduction in the total road death risk.

The abatement effect is the result of road death risk alleviation measures, which reflects both supply side and demand influences. On the demand side, at low income levels, people are less able to invest in road safety, even though there is a demand for it, resulting in low abatement. Nonetheless, as the level of income rises, people pay greater attention to road safety and they can afford higher-cost road safety enhancement measures, enabling more commuters to switch to lower-risk modes of transport.

On the supply side, at low levels of income, societies are unable to afford sufficient resources to establish the social institutions needed to regulate road safety interventions. With a higher income level, abatement efforts become more substantial because more resources are available to invest in road safety. Therefore, road safety regulatory institutions become more effective. This supply side of abatement, together with the demand side mentioned above, is expected to yield a declining relationship between road deaths and income. 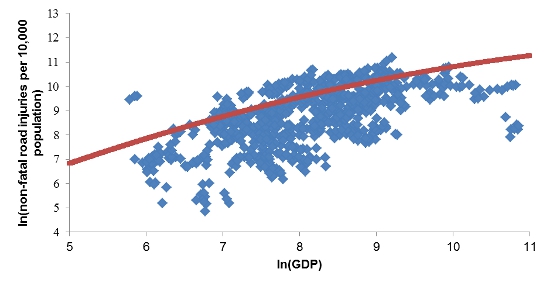 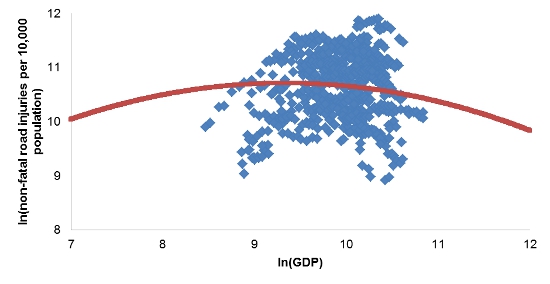 Improvements in road infrastructure, the quality of regulatory institutions, and increase in the use of safer transport modes will help reduce non-fatal road injuries. However, less developed countries generally suffer from lower judicial efficiency in law enforcement and higher levels of motorcycle ownership, which tend to persist over time. In view of this, it will be beneficial to improve the quality of regulatory institutions and promote the use of safer transport modes, especially in less developed countries, to achieve a sustainable improvement in road safety. Economic growth may be a prerequisite, but it alone does not guarantee that positive change will happen.

This article is based on the paper, ‘Factors associated with the relationship between non-fatal road injuries and economic growth?’, in Transport Policy.

Law Teik Hua – Universiti Putra Malaysia
Dr. Teik-Hua, Law is Associate Professor at the Road Safety Research Center, Universiti Putra Malaysia. He received his Ph.D. in Road Safety from the Center for Transport Studies at the Imperial College of London. He has 18 years’ experience in road safety research and his specialization areas are road safety, transportation planning and management and road users’ behavior. He has working on multiple national and international research projects that addresses road users’ behavior and road safety issues.