Following a summer of declining approval ratings, President Joe Biden now faces further falling sentiment as concerns about inflation increase. Paul Whiteley and Harold Clarke find that consumer confidence, which is influenced by inflation and unemployment rates, tends to track with presidential approval. With consumer confidence on the decline because of concerns about persistent inflation, they argue, Joe Biden and the Democrats are now facing strong electoral headwinds ahead of the crucial 2022 midterm elections.

Recent opinion surveys show that the American electorate has become decidedly gloomy about the US economy. The widely respected University of Michigan’s Index of Consumer Sentiment (ICS) which gauges public opinion about the country’s economy every month, fell to 66.2 points on a 0-200 scale in November. This is the index’s lowest level since the 2008 stock market crash and subsequent Great Recession. Commentators have blamed the recent decline in consumer confidence on rising inflation. Over the past year the cost of many goods and services has escalated and in October, the inflation rate reached 6.2 percent year-on-year —its highest level in over 30 years.

Political fallout is likely. It is now less than a year before the 2022 mid-term congressional elections. At present the Democrats control the presidency and both houses of Congress. The 2022 midterms are important because they will determine if ‘gridlock politics’ returns with the Republicans regaining control of the House of Representatives and possibly the Senate as well. In turn, Republican majorities in one or both Houses of Congress would put paid hopes Democrats entertain of passing President Biden’s continuing ‘Build Back Better’ legislative agenda.

The historical record tells us that national elections are strongly influenced by voters’ evaluations of the president’s performance on the economy. Since taking office in January of this year, President Biden’s approval ratings have fallen sharply. His initial approval rating was 57 per cent in the January 2021 Gallup poll. Ten months later, it had dropped to 42 per cent, a 15-point decrease. As shown in Figure 1, the Gallup numbers are quite typical. Other polls also report big slides in Biden’s approval with some showing it dropping below 40 per cent 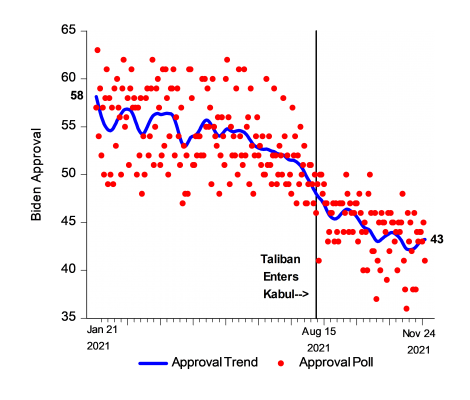 Presidential approval matters for how Americans vote. For example, Gallup data show the average approval ratings for all two-term presidents since 1945 is 52.6 per cent. In contrast, the average approval rating for presidents who were defeated after their first term was 49.2 percent. So, a rough ‘rule of thumb’ is that presidential approval should not fall below 50 per cent for an extended period if an incumbent wants to win a second term.

Voters’ appraisals of the economy are an important driver of presidential approval. Figure 2 shows monthly approval ratings for successive presidents since Bill Clinton entered the Oval Office in January 1993. Figure 2 below, compares these ratings with consumer confidence. We analyzed the relationship between these measures using a statistical analysis. The results show that presidential approval and consumer confidence move together in a dynamic equilibrium over time; they rise and fall together. 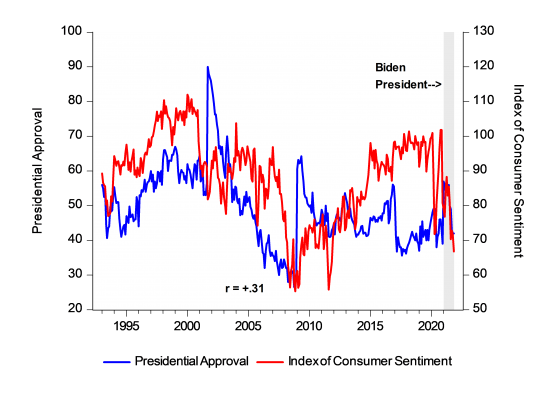 Source: The Gallup Poll and the University of Michigan Consumer Sentiment Surveys

This long-run relationship can be perturbed in the short run by unexpected events or ‘shocks’ of various kinds. For example, President George W. Bush’s approval soared after the attack on the World Trade Centre in September 2001 as Americans ‘rallied round the flag’. Subsequently his ratings rallied briefly again when the Iraq War began in March 2003 and they took a big hit when the stock market crashed in September 2008 at the beginning of the Global Financial Crisis. This event seriously tarnished the Republicans’ reputation for sound economic management and boosted Democrat Barack Obama prospects of winning the 2008 presidential election. 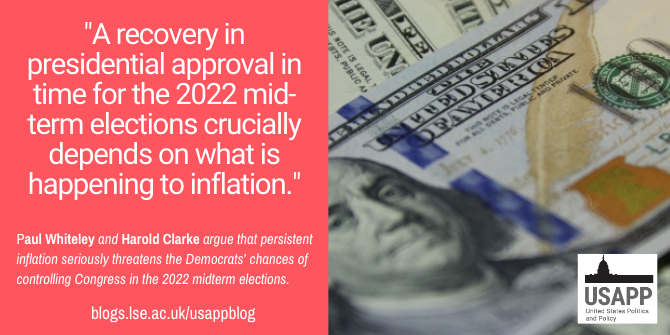 Photo by Vladimir Solomianyi on Unsplash

In July 2021 a report by the IMF was upbeat about the impact of the Biden administration’s spending plans designed to revive the US economy after the COVID-19 pandemic. It argued that: ‘The Biden administration’s proposed spending plans will add momentum, raising GDP by more than 5 percent from 2022 to 2024, and will create a lasting impact by increasing productivity and labor force participation’. It also forecast that inflation would fall to 2.2 per cent by the end of 2022.

This prediction looks overly optimistic now that concerns about price increases have come to the fore. The inflation rate is currently well above the forecast level of 5.8 percent  In addition, inflationary expectations, which are also measured in the University of Michigan surveys have been rising as well.

The debate among experts has been about whether current inflation is a temporary or a more permanent ‘structural’ problem. If it is temporary due to supply chain problems created by the pandemic, then the adverse consequences for economic recovery should be relatively modest. However, if it is permanent, then the Federal Reserve, which sets monetary policy, will have to act by raising interest rates. In turn, this is likely to slow the economic recovery and may even trigger a financial crisis. The prospect of 1970s’ style ‘stagflation’ cannot be ruled out either, which combines inflation and rising unemployment.

What can we expect going forward? Now, the good news for President Biden and Democratic congressional candidates is that unemployment is falling rapidly as the US economy recovers from the massive shock of the COVID-19 crisis. The jobless rate was 6.3 per cent in January of this year and it now has fallen to 4.2 per cent. Also, the stock market is booming—the All-Share Index of stock prices stood at 138.8 in January and by November it had climbed to156.9. If they continue, these two trends will boost presidential approval and bolster the Democrats’ prospects in the 2022 elections.

This means that a recovery in presidential approval in time for the 2022 mid-term elections crucially depends on what is happening to inflation. The jury is still out on whether it is a temporary or a more permanent problem, but there are signs that it is not to abate any time soon. A very important signal in this regard is the recent statement by the Chairman of the Federal Reserve, Jerome Powell, who announced on November 30th that it is time to ‘retire’ the label ‘transitory’ to describe current inflationary trends. If Powell is correct, history tells us the Democrats will be in big trouble in the 2022 midterm elections.