Although gentrification has captured the attention of the public, scholars, and policy makers, few have considered how immigration is related to the process. Jackelyn Hwang shows that immigrants, Asians, and Hispanics are associated with neighborhood gentrification during the late 1970s and 1980s across several large US cities. She finds that these effects are even stronger in neighborhoods with large black populations. However, a closer look at two cities with high levels of gentrification and immigration but distinct contexts of immigration—Chicago and Seattle—reveals distinct relationships between these groups, neighborhood characteristics, and neighborhood change.

The populations of US city centers are now growing more than their suburbs, but this isn’t just due to gentrifiers. While young professionals, Millenials, and members of the “creative class” have been contributing to the population growth in cities in recent decades, immigrants have too, and they have been for many decades.

As the manufacturing sector declined and suburbanization became widespread in the years following World War II, those who had the means fled central cities, leaving many urban neighborhoods in decline—both in terms of population and their social and economic conditions. In 1965, the US eased immigration restrictions, opening up the gates for new groups to enter the US. These new migrants were primarily from Latin America and Asia, and many settled in central cities, where economic opportunities were available and affordable housing was plentiful. With these new groups, neighborhoods and cities became increasingly multiethnic.

Gentrification—the influx of investment and middle- and upper-class residents to previously low-income neighborhoods—began to spread not too long after the influx of immigrants began (the laws became enacted in 1968) during the late 1970s and early 1980s. And, gentrification intensified beginning in the late 1990s, not too long after the growth of immigrants also intensified. Figure 1 illustrates this timeline of events.

Notes: Periods of gentrification are shaded in gray. Hackworth and Smith also refer to an earlier period not shown here, which was slow and sporadic and concentrated in a few northeastern cities. Sources: Hackworth and Smith; 1950-2000 US Census data

The rise of gentrification and the rise of immigration go hand in hand, yet these urban transformations are rarely considered together. In recent research, I examine these linkages. First, I use field surveys of gentrification across 23 large US cities that were collected by geographers Daniel Hammel and Elvin Wyly during the 1990s but largely capture neighborhoods that underwent gentrification beginning in the late 1970s and through the 1980s. In cities with high levels of immigration in the years following 1965, the probability of gentrification among “gentrifiable” neighborhoods (those with median incomes below the city-wide median in 1960 or 1970, depending on when the cities declined in the region) was highest, as Figure 2 shows.

After taking into account differences in social, economic, and housing indicators among these “gentrifiable” neighborhoods and unobserved differences across these 23 cities, neighborhoods with larger foreign-born, Asian, and Hispanic populations were more likely to gentrify in this early period. Figure 3 illustrates results from the analysis, depicting the estimated odds ratios of gentrification for a one-unit increase in the foreign-born, Asian, and Hispanic populations. These values indicate that one-unit increases for each of these groups, respectively, increases the odds of gentrification by 36 percent, 14 percent, and 23 percent.  These effects are even stronger in neighborhoods with larger black populations. In other words, the effect of these groups on the probability of gentrification increases substantially in neighborhoods with greater shares of blacks.

Notes: Estimates for the foreign-born population are from separate models than those including Asians and Hispanics. Sources: Created by author based on results in Hwang (2015).

There are several possible explanations for these relationships. First, immigrants arriving following the passage of the Hart-Celler Act in 1965 revitalized declining and affordable neighborhoods in the wake of urban decline. Not only did they repopulate these neighborhoods, but they also may have contributed directly to the local housing market and the local economy through both consumption and entrepreneurship. Other studies have linked immigrants to improvements in neighborhood quality, such as declines in crime. Lastly, ample evidence documents the importance of race in where residents choose to live in the US, and the influx of foreign-born residents, Asians, and Hispanics had increased the racial and ethnic diversity of neighborhoods, particularly those with larger black populations. Altogether, the economic, social, and compositional contributions of these new groups to previously declining, low-cost neighborhoods may have made these neighborhoods more attractive to gentrifiers.

These characteristics in two cities experiencing high levels of gentrification and immigration but with distinct contexts of immigration (as well as race)—Chicago and Seattle—reveal that the relationship between gentrification and immigration is complex. In Chicago, which has served as a major destination for Latin American immigrants in the last several decades, more neighborhoods with high shares of immigrants and Asians, but not Hispanics, experienced gentrification by 1995 compared to those with low shares of these groups. These same neighborhoods had declines in their burglary rates. Moreover, neighborhoods with high levels of growth in recent decades among immigrants, Asians, or Hispanics had large increases in non-Hispanic whites and increasing racial diversity.

In Seattle, neighborhoods with high levels of Asians, Hispanics, and foreign-born residents had relatively similar measures of neighborhood quality, like perceptions of danger or disorder, actual crime rates, or informal social control, and they were no more likely to gentrify than neighborhoods with low levels of these groups. However, neighborhoods with greater shares of Hispanics and growth in foreign-born and Hispanic residents, but not Asians, had greater influxes in their non-Hispanic white populations, suggesting that these areas were more likely to gentrify in recent years. Figure 4 displays these differences for the white population change from 1990-2009 among gentrifiable tracts.

Lastly, the degree of change in neighborhoods that had gentrified by the 1990s and their adjacent low-income neighborhoods, measured using Google Street View, is greater in neighborhoods with immigrant growth in Chicago. In Seattle, on the other hand, decline in the foreign-born black population was associated with greater levels of gentrification.

Given that many city leaders, especially in cities that have struggled for many decades, have turned to development promoting gentrification and plans for attracting immigrants to revitalize their cities, it is important to understand how the influx of immigrants impacts gentrification, and relatedly, residential segregation. Although low-income, black neighborhoods were more likely to gentrify when immigrants, Asians, or Hispanics were also present, the clear implication is that low-income, black neighborhoods that did not receive such additions were far less likely to gentrify.

The findings offer some hope that the addition of these new groups to neighborhoods that have been left behind for decades can attract reinvestment and renewal, but policy interventions are crucial to ensure that those who want to stay in their neighborhoods can stay and that affordable housing remains. Moreover, we need a broader shift in where reinvestment and renewal takes place if we want cities that offer opportunities for equality for all.

This article is based on the paper, ‘Gentrification in Changing Cities: Immigration, New Diversity, and Racial Inequality in Neighborhood Renewal’, in The ANNALS of the American Academy of Political and Social Science.

Jackelyn Hwang – Princeton University
Jackelyn Hwang is a Postdoctoral Research Fellow at the Office of Population Research at Princeton University. She received her PhD in Sociology and Social Policy from Harvard University. Her research interests are in the areas of urban sociology, race and ethnicity, immigration, and inequality. Her projects examine the relationship between neighborhood change and racial and ethnic inequality in US cities. 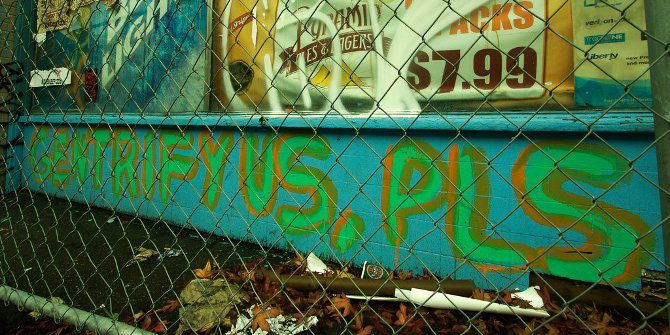 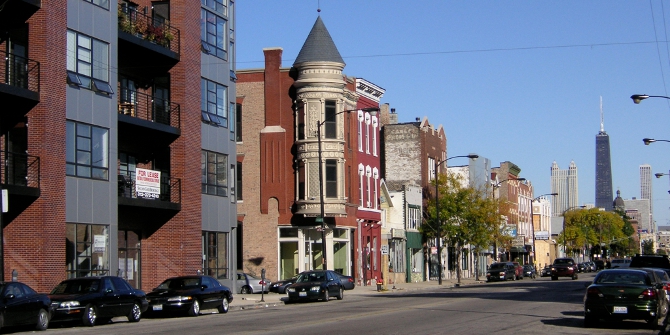