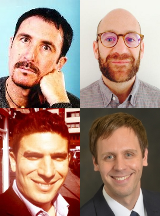 For most of the twentieth century, the Los Angeles region had one of the county’s best performing economies. But now, incomes of those in the San Francisco Bay area outpace those in LA by a third. In their new book, Michael Storper, Thomas Kemeny, Naji Makarem, & Taner Osman take a close look at how San Francisco has thrived while Los Angeles stagnated. They argue that the Bay Area created an ecosystem of invention and innovation that allowed Silicon Valley to arise and thrive, even as LA’s industries remained largely siloed.

Cities and regions have very different fortunes over time, and it is hard to predict them. The ups and downs of big metropolitan areas make a huge difference to the people who live in them, creating and destroying opportunity. They drive people in and drive people away. The ups lead to flourishing public facilities, while the downs lead to deterioration of the urban environment.

It is one thing to observe the conditions that, on average, separate successful or rising regions from less successful ones. But the averages only get us so far. Underneath them are chains of events; pathways that are defined and can become self-reinforcing. Consider Greater Los Angeles and the San Francisco Bay Area, two urban centers that have diverged sharply in recent decades. In 1970 they had about equal per capita incomes, but, as Figure 1 show, today incomes of people in the Bay Area are one-third higher than in Southern California. The Bay Area is in a group of metropolitan areas that took the “high road” in terms of incomes, including New York, Chicago, Boston Washington DC and Philadelphia. Greater Los Angeles’s income growth is more like that of Detroit. 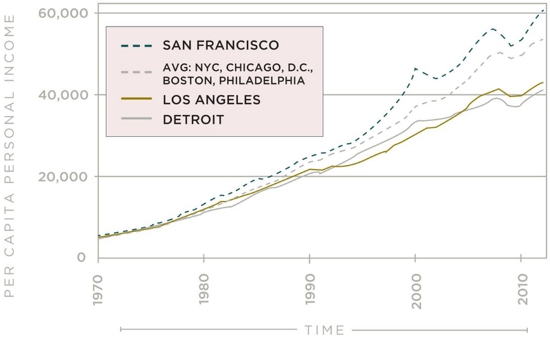 All in all, the Bay Area is an example of how a region successfully enters the New Economy, while LA—the star economy among US regions for nearly 70 years in the twentieth century—did much worse than its northern neighbor. How did this happen and what are the lessons we can learn from it?

At the outset, both cities could boast the initial building blocks that would, in the Bay Area, eventually flower into a booming tech industry—in fact, in some ways these initial factors, such as the presence of world-class technology companies and the pool of highly-skilled engineers and technologists, looked more promising in LA than in San Francisco. LA made more semiconductors than the Bay Area in 1970. The first Internet message was sent from University of California, Los Angeles. LA was home base for mythical entrepreneurs for much of the twentieth century, from movies to aerospace. But once the age of IT arrived, all the Steve Jobs, Bill Hewletts and William Shockleys—the key entrepreneurs of the New Economy, were in the north, not the south.

Part of it might be luck. But, as the saying goes, fortune favors the prepared. And this is the real key to why San Francisco became the center of the world IT industry and LA did not.

Southern California’s firms, industries, and political leaders were conservative in facing this new world. LA’s industries were largely siloed, with the worlds of Hollywood, aerospace, the creative industries, and academia separated from one another and no leadership groups to bring them together to mobilize for the New Economy. In contrast, the Bay Area had cross-fertilization mechanisms that allowed new skills and practices to emerge rapidly. The IT world blended older engineering communities with young “hippie” technologists and “appropriate technology” environmentalists, and both were mixed in with academic researchers. This created the unique user-friendly approach to new technologies that the Bay Area captured, while LA’s tech firms remained oriented to their traditional clients in mass production and the military.

Economics and society interact. They come together in these organizational or relational structures—in firms, leadership groups, and attitudes or simply a sense of possibility. Regional business leadership in the Bay Area grasped the existence of the New Economy early on. In LA, leaders pushed policies for old economy revival, which reinforced the growing low-wage employment in that region. And the New Economy industries that arose in Orange County were big, but were second-stringers, applying traditional corporate models to new technologies, but not inventing them from the bottom up. LA never got the ecosystem of innovation and invention that the Bay Area created, even though LA had had the greatest innovation ecosystem of the first part of the twentieth century.

The story repeated itself with biotechnology. The early invention of gene splicing occurred almost simultaneously at the University of California San Francisco and City of Hope hospital in Hollywood. The early scientist-entrepreneurs were in both regions. The first big biotech firm, Amgen, established itself in LA. But Amgen quickly turned into a traditional company—big, go-it-alone, managed by MBAs, not scientists. Genentech went the other direction, following the Bay Area New Economy approach: small, nimble, with many spinoffs, managed by scientists, with a revolving door to an expanding community of spin-offs and networks of people with new ideas. Biotech became a big cluster in the Bay Area, a big company in LA—but the Bay Area won out, generating many more jobs than LA.

Hollywood was, and continues to be, LA’s success story, the undisputed world capital of entertainment. Hollywood became a New Economy industry even before IT, by reshaping itself in the 1970s. But Hollywood is too small to carry the whole Southern California economy on its shoulders, and it is too isolated from the rest of the region’s activities. The boards of directors of Hollywood firms do not contain people from tech and vice-versa. By contrast, both within the tech world and between tech and the rest of the Bay Area economy, boards of directors are networked: they talk across boundaries.

Both regions followed essentially the same economic policies, rather traditional in nature: mega-projects, tax incentives, and even job training, but these had little impact on the divergence in economic development between the two metro areas. That’s because such policies do not address the real issue:  the capacity of regions to allow their labor, capital, and talent to combine and recombine in ways that follow the evolution of opportunities in the wider economic environment. The networks of groups and leaders in Los Angeles had few conversations about this (they were overly confident) and the conversations they had were backward looking. By contrast, the Bay Area strengthened its networks—especially through the Bay Area Council—for such conversations to take place, and people there quickly understood that the old economy was old, and a new economy was there, from which they could innovate and prosper. LA had no equivalent of the Bay Area Council, but instead a fragmented world of different groups who were mostly backward-looking.

Greater LA is still a relatively wealthy region, full of creativity, cultural power, good academic institutions, and a talent base from around the world. What it lacks is a way of pulling all this together.

The Bay Area is perhaps the world’s leading tech economy, wealthy and beautiful. But the Bay Area should not rest on its laurels. In 1960, Detroit was an undisputed capital of American industrial might. Nothing lasts forever. 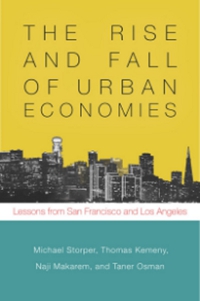 This article first appeared at the Stanford University Press blog, and is based on the new book,The Rise and Fall of Urban Economies, which draws on economics, sociology, political science, and geography to shed light on the economic development of metropolitan regions.