In the past, concerns about inequality were tempered by the perception that people had a high degree of economic mobility. But how has intergenerational mobility changed in the US? In new research which uses census data on names and occupational income to examine social mobility between 1850 and 1940, Claudia Olivetti and Daniele Paserman find that intergenerational mobility was high in the 19th Century, then fell sharply between 1900 and 1920, and began to improve somewhat after that. They argue that these changes in economic mobility were influenced by regional differences in economic development and fluctuations in income and wealth inequality

The growing disparities in income in the US and elsewhere have placed the issue of income inequality at the center of the public debate.  Inequality may be tolerable if at the same time there is a high degree of economic mobility across generations, implying that a child born in a disadvantaged environment has a sufficiently large chance to climb to the upper rungs of the income ladder. Some have argued that Americans tend to be relatively averse to redistribution because they perceive income mobility to be relatively high. However, recent research reveals that today intergenerational mobility in the US is lower than in most other developed countries. Was the view of the United States as the land of unlimited opportunity ever justified?

In new research, we take a long run perspective and use census data on first names and occupational income to track social mobility in the US between 1850 and 1940. Obtaining historical estimates of mobility is challenging because of the absence of readily available data that allow linkages across generations. We overcome this barrier using a unique methodology that exploits the fact that first names carry rich information about socioeconomic status. To illustrate our approach, suppose rich men named their sons Edward in 1850, while poor men named their sons Sam; then, one can look at how Edwards and Sams are faring in 1880 to get clues about social mobility across generations. If the thirty-year old Edwards are on average better off than the thirty-year old Sams, we would conclude that intergenerational mobility is relatively low.

The same idea can be applied to fathers of Emmas and Sallys and to study how daughters’ economic status (proxied by their husbands’ occupational income) is related to that of their fathers. Thus, we provide estimates of mobility that can be calculated consistently over time and for both genders, and identify long run trends in intergenerational mobility.

We find that the father-son intergenerational elasticity (the percent increase in a child’s income associated with a one percent increase in father’s income) increased by 24 points between 1870 and 1940. This increase is consistent with the findings of other authors, who document a marked decrease in men’s intergenerational mobility in the United States between the late 19th Century and the second half of the 20th Century. As shown in Figure 1, the elasticity did not increase smoothly over time: it was relatively flat throughout the second half of the 19th Century, and then increased sharply between 1900 and 1920, followed by a slight decline between 1920 and 1940. The intergenerational elasticity between fathers and sons-in-law displays a similar trend between 1870 and 1920 (mostly flat between 1870 and 1900, and a sharp increase between 1900 and 1920), suggesting that there was a substantial degree of assortative mating. 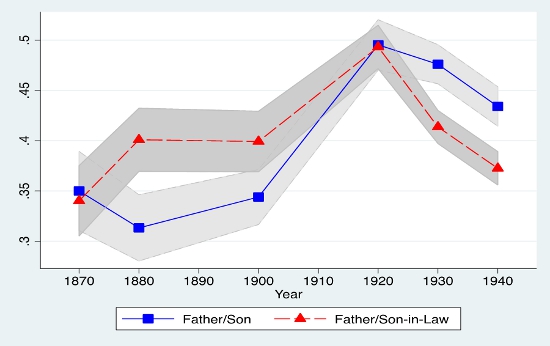 Our finding of a sharp increase in elasticities between 1900 and 1920 is very robust, suggesting that this was a key inflection point in the evolution of mobility in the United States. An exploration of historical, demographic and economic trends suggests that regional differences in economic development and fluctuations in income and wealth inequality were the main factors driving these patterns of economic mobility.

The industrial revolution did not spread uniformly across the United States. Regional income diverged significantly in the second half of the 19th Century. By 1900 income per capita in the South was barely half of the national average. If fathers and sons tend to live in the same region, large economic disparities across regions will translate into a high correlation between father’s and son’s income. Our analysis suggests that geographic differences in the degree of economic development can explain about half of the increasing elasticity between 1900 and 1920.

The expansion of public schooling in the early 20th Century can also contribute to explaining the decline in mobility between 1900 and 1920, because the wealthy were in a better position to take advantage of access to schools.

In this light, it appears that the ‘Great Gatsby curve’ documented in data across both US states and countries is real both now, and in the past.

This article is based on the paper “In the Name of the Son (and the Daughter): Intergenerational Mobility in the United States, 1850-1940,” in the American Economic Review, August 2015.

Claudia Olivetti – Boston College
Claudia Olivetti is a Professor of Economics at Boston College and a Research Associate at the NBER. Her research focuses on women in the labor market including wages, hours, and careers and on intergenerational mobility and marriage institutions in historical perspective. She has also worked on the baby boom and maternal health and on historical and comparative perspectives on the gender gap.

Daniele Paserman – Boston University
Daniele Paserman is a Professor of Economics at Boston University, a Research Associate at the NBER and a Research Affiliate at the CEPR. His research spans a number of areas in labor economics and applied microeconomics: gender differences in the labor market; immigration and its effects on the host country’s educational system and its labor markets; the effect of the childhood environment on long term socioeconomic outcomes; models of search, with applications to job markets and marriage markets; and a number of issues related to the dynamics of violence and the political economy of the Palestinian-Israeli conflict. He currently serves as Co-Editor of the Journal of the European Economic Association.