What mechanisms serve to maintain the gender pay gap and what other forms of discrimination persist in the labor market? In Unexplored Dimensions of Discrimination, editors Tito Boeri, Eleonora Patacchini and Giovanni Peri provide a comprehensive, empirically-driven interrogation of various facets of discrimination through data obtained from the USA, Spain and Italy. Ria Ivandic welcomes the book for opening up a highly important academic dialogue on previously unexamined aspects of labor market discrimination. 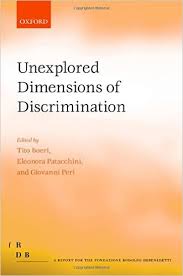 For every pound earned by men in the United Kingdom, women earn 81 pence. For every dollar a man makes in the USA, a woman makes 77 cents. For every yen a man in Japan makes, a woman will earn 73 sen. Although correct, these figures are hardly sufficient for a serious conversation about the gender gap as each can equally overstate or understate discrimination in the labor market. The book discussed here, in contrast, provides a comprehensive contribution to the dialogue on the dimensions of discrimination not only with respect to gender, but also further sources of discrimination.

Unexplored Dimensions of Discrimination, edited by Tito Boeri, Eleonora Patacchini and Giovanni Peri, is a collection of academic research by a number of experts addressing two specific questions on the topic of discrimination. Firstly, it focuses on the mechanisms of gender discrimination in the labor market. Secondly, the book examines unexplored outcomes of discrimination, such as physical appearance, sexual orientation, weight and religion.

It is vital to bridge the gap between the statistics often reported in the media that shape public opinion and the array of academic papers that provide causal research on very specific topics of discrimination, but rarely reach a broader audience. The book initiates this highly necessary academic discussion, which should lead to the formulation of public policy and to educating a wider public on the discrimination that persists today. Although primarily prepared for an audience of academics, economists, lawyers and anti-discrimination associations, it should be read by every individual interested in issues of equality looking for an overview of the mechanisms of discrimination that goes beyond the inequality of the ratio of median wages or employment rates to draw conclusions on the existence of discrimination.

The authors motivate the empirical analysis by building a search-matching-bargaining model to identify the impact of explicit prejudice, differential productivity and gender-specific search frictions.  Using data on the US, their main finding is that, despite the convergence in education levels, the gender gap has not been closed, but in fact grows stronger with additional years of education. Sources of a gender gap in high-income economies may be concentrated at the top of the income distribution and the hierarchical ladder (the glass ceiling hypothesis). Another candidate for a theoretical explanation of discrimination would be a statistical discrimination model that in turn would provide stronger support for affirmative action policies. Empirical data also suggest positive implications of affirmative action policies as gender wage differentials substantially decrease in occupations where women constitute a sizeable proportion of employees.

Chapter Three tackles the question of why women tend to self-select into non-employment, contributing to recent literature that has found the presence of children to be particularly important in explaining why women tend to choose part-time employment and the dynamic effects this has on earnings (see, for example, Bertrand, Goldin and Katz (2010) and Kleven, Landais and Søgaard (2015)). One of the main contributions of the book is the analysis of unique data that follow Italian college graduates from high school, through to university and into the labor market. The data show that despite their better academic performance than men, women tend to self-select themselves into majors in the Humanities and prioritise ‘teaching type’ jobs when it comes to occupational choice. These results create substantive evidence for the need for remedial policies, for example, through a more gender-neutral approach to recommending college majors to high school students or through delaying the choice of specialisation.

Given growing attention on cultural and social diversities in today’s societies and their rightful position at the forefront of political debates, the second part of the book explores a complex topic: the outcomes of unexplored dimensions of discrimination, such as sexual orientation, physical appearance, obesity and religion. The authors conduct a field experiment replicating the seminal work of Bertrand and Mullainathan (2004), randomising information on perceived male homosexuality and on physical appearance by sending fictitious CVs to job posts. They find a statistically significant penalty of 30% for males perceived to be homosexual and a beauty premium for low-skilled women. Although the analysis is limited to correlations and a field experiment with limited implications outside the Italian context of social norms, it is a very welcome foundation for exploring other sources of discrimination. As most experiments pose concerns of external validity, such analysis should offer an incentive for countries to use field experiments to understand the mechanisms and sources of discrimination within their labor markets as a step towards effective public policy.

One of the strongest advantages of the book is also its strongest disadvantage: the complexity of the analytical methods might discourage an average reader without a background in econometric methods to conclude that it is too advanced reading. This would be a shame as the book provides a comprehensive overview of labor market discrimination without requiring a deeper understanding of the ‘alphas and betas’ its methods contain. As the accessibility of data very often proves to be a trade-off between causality and external validity, the authors only focus on three countries (the USA, Spain and Italy) and largely explore the gender gap affecting college graduates. We should therefore hope that this strand of literature will develop to include further countries and data to identify the interactions of the mechanisms discussed. Finally, research should strive to better understand the dynamic effects of social norms in defining perceived gender roles that persist despite equality in educational achievement. In the meantime, this book should be read by an increasing number of policymakers and offers a foundation for refining equal opportunity legislation, family policies based on equal opportunity and interventions in earlier education.  It is an important introduction to an empirically-driven academic dialogue on discrimination, an often misinterpreted and controversial topic amongst the general public.

Ria Ivandic – King’s College London, LSE Financial Markets Group
Ria Ivandic is a PhD Candidate at the Department of Political Economy at King’s College London and a Research Assistant at the Financial Markets Group at the London School of Economics and Political Science. She has written a number of op-eds in newspapers such as the Telegraph, El Pais, Valor Economico and Banka Magazine.