Party conflict, gridlock, and dysfunction are common words for describing the US Congress in recent years. In new research, D.J. Flynn and Laurel Harbridge investigate how party conflict— resulting in compromise, victories for one party, or gridlock—shapes public opinion towards Congress. They find that on issues where the parties agree over end goals, gridlock hurts evaluations of Congress even more than legislative victories for the opposing party.

Gridlock in Congress is on the rise and, as a result, recent Congresses have been termed the “Worst. Congress. Ever.” Scholars are increasingly interested in how this partisan conflict influences how the public evaluates Congress, as well as whether the public prefers bipartisan compromise to continued conflict. Yet, research on party conflict often overlooks the outcome of conflict, or focuses on instances in which conflict results in partisan victories. The inattention to gridlock—or instances in which the parties are unable to resolve differences and reach agreement, resulting in inaction on an issue—is especially surprising given growing concerns about partisan conflict and legislative productivity.

How does the outcome of partisan conflict—in particular whether conflict results in gridlock—affect how people evaluate Congress? Our new research shows that gridlock hurts evaluations relative to compromise and to legislative victories by one’s favored party. Perhaps more surprisingly, on issues where the parties disagree on the means of changing policies but agree on the end goals (i.e., consensus issues), partisans view gridlock as even worse than a victory by the opposing party.

Our research relied on two survey experiments conducted in 2014, in which we manipulated whether party conflict resulted in a policy compromise, a legislative victory for Democrats, a legislative victory for Republicans, or inaction. We also included conditions where inaction was framed as resulting from ideological disagreement, and where inaction was framed as resulting from partisan fighting. In the first study, we focused on energy policy, a consensus issue on which the parties disagree over the means of addressing the problem but agree over the end goals (i.e., lowering costs and reducing dependency on foreign oil). In the second study, we focused on gun ownership policy, where parties disagree over both the means and ends of policy (i.e., the parties disagree over whether gun ownership should be expanded or curtailed). In each study we then asked participants, “Do you approve or disapprove of how Congress is handling [energy policy/the issue of gun ownership]?”

This same striking pattern does not appear in the case of gun ownership policy (study 2). On this non-consensus issue, gridlock is viewed very similarly to a win by the opposing party. Both outcomes are worse than either a compromise or a win by one’s own party.

Our results demonstrate that while partisan considerations are clearly important in how people evaluate public policies, these considerations do not always trump the desire for Congress to take action on important issues. When policy alternatives are clearly linked to a particular party, people still express a preference for Congress to “do something,” even if the policy is the favored position of the opposing party.

We also find that, on energy policy, gridlock that is framed as resulting from ideological disagreement is viewed more positively than gridlock that is framed as resulting from partisan fighting and strategic efforts to highlight disagreement. This suggests an important role for the media in shaping how the public reacts to legislative gridlock. Indeed, we see these varying frames for gridlock in media coverage of the 2013 government shutdown. Some outlets described the shutdown in terms of “expansive and explosive” ideological differences. By contrast, others argued that the shutdown was driven by “political opportunism… It is most definitely not being driven by principle.” Our results suggest that the public’s reaction to shutdowns and similar instances of gridlock depends, in part, on which of these explanations prevails in the media.

This article is based on the paper “How Partisan Conflict in Congress Affects Public Opinion: Strategies, Outcomes, and Issue Differences” in American Politics Research.

Laurel Harbridge – Northwestern University
Laurel Harbridge is an Assistant Professor in the Department of Political Science and a Faculty Fellow at the Institute for Policy Research, at Northwestern University. Her research interests include the United States Congress, political parties, public opinion, and representation. Her latest book Is Bipartisanship Dead? Policy Agreement and Agenda-Setting in the House of Representatives was published in 2015 by Cambridge University Press.

Posted In: D.J. Flynn | Elections and party politics across the US | Laurel Harbridge 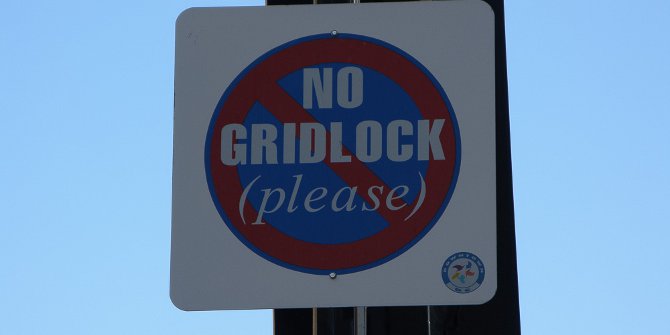