The Paris climate change summit COP21 ended last week with the signing of a ‘historical’ agreement, to much acclaim worldwide. Prisca Merz argues that the deal is, in fact, bitterly insufficient, even though there are some encouraging signs: solutions are known and what is needed is political courage. The necessity of a paradigm shift is being voiced by an increasing number of organisations. Merz writes that legal tools are crucial to bring about this shift.

The agreement struck by world leaders in Paris on Saturday has been widely hailed as a success of historical significance. However, while it is a necessary step, the deal was far from sufficient to achieve the change we need and includes a number of worrying provisions which illustrate that world leaders have failed to understand the systemic issues underlying the ever-accelerating process of climate change.

While the goal of the agreement – namely ‘holding the increase in the global average temperature to well below 2°C above pre-industrial levels and to pursue efforts to limit the temperature increase to 1.5°C above pre-industrial levels’ – is to be commended, it remains entirely unclear how it is to be achieved. This is particularly the case given that we have already reached 1°C warming and the intended nationally determined contributions submitted by countries in advance of the summit only amount to a limit of 2.7°C warming. Such a growth in temperatures is well beyond anything considered safe by climate scientists, and would almost certainly lead to the disappearance of small island states, as well as the flooding of coastal cities, impacting on millions of people.

Rather than committing to an end of the use of fossil fuels outright, the signatories of the agreement simply ‘aim to reach global peaking of greenhouse gas emissions as soon as possible… to achieve a balance between anthropogenic emissions by sources and removals by sinks of greenhouse gases in the second half of this century’. This will be insufficient to avoid hazardous climate change, and the most vulnerable communities will be the ones to suffer. Even worse, it opens a dangerous path for humanity to engage not only in carbon capture and storage, a technology which carries significant risks and remains untested at the scale necessary, but potentially also a variety of other so-called ‘geoengineering’ technologies.

The agreement also further promotes the highly contested practice of carbon offsetting, where industrialised countries can ‘offset’ their emissions through conservation projects in the Global South. This has been criticised by some indigenous rights groups on the grounds that it reduces the Paris accord to little more than a trade agreement: commodifying land and allowing those responsible for climate change to buy their way out of compliance.

A word count of the agreement illustrates the point: while the word ‘economic’ appears 24 times in the text and ‘financial’ or ‘finance’ 47 times; ‘earth’ is found only once, the word ‘ecosystems’ is mentioned on 5 occasions and ‘fossil fuels’, the key factor in the climate change problem, is not mentioned at all. The limited attention paid to shipping and aviation is also notable, given these sectors are responsible for 8 per cent of global emissions and are predicted to grow substantially. The same could be said for the lack of focus on industrialised agriculture.

The need for a paradigm shift

If the Paris agreement is insufficient, what is actually required to tackle the root causes of climate change? Undoubtedly we require a paradigm shift: a shift to a world where we recognise the intrinsic value of nature and the interdependence between different living beings, ecosystems and humanity – a perspective many indigenous communities have understood for centuries.

This will require shifting to a world that relies to a greater extent on decentralised energy production, with democratic oversight and local self-determination reducing the power of multinational corporations over agriculture, energy and transport. By empowering local communities with a say over their energy, water and food supplies, and by ensuring those responsible for environmental crimes are held to account, a more sustainable approach can be implemented, with human health and well-being placed above economic growth.

To tackle the systemic issues underlying climate change, we also need to understand the link between fossil fuel extraction and human rights violations and the link between our current economic system and climate change. Through biodiversity loss, ocean acidification, chemical pollution of the nitrogen and phosphorus cycles we are close to crossing other planetary boundaries.

Attention needs to be kept high also on the link between climate change and food security, on the increasing spread of antimicrobial resistance, infectious disease and conflict. All these issues are linked with climate change and only a holistic perspective can tackle them all at once, delivering benefits in multiple areas. The need for a paradigm shift which goes much deeper than just addressing carbon emissions through a number of market-based mechanisms is profiling itself with increasing clarity.

As part of this shift, legal tools are important and necessary. The Netherlands has recently made headlines with their supreme court finding the government guilty of failing to act on climate change, and ordering a reduction of CO2 emissions by 25% within 5 years, arguing this is necessary to protect their citizens’ human rights.

In the same spirit, the grassroots movement ‘End Ecocide’ is requesting the adoption of the crime against nature as an international Crime against Peace. Should the initiative be successful, individuals with superior responsibility within firms – or even the corporations themselves – could be held accountable for great natural damage caused by them. ‘Any act or failure to act which causes significant and durable damage to any part or system of the global commons, or which threatens ecosystem services essential to the safety of humankind’ would become an international crime. The aim is to introduce the necessary legal tools for communities across the world to defend their homes, water, soils, and ecosystems.

And yet, the themes of liability and rights are notably absent from the Paris agreement. The only reference to human rights, the right to water and development, and the rights of indigenous people, local communities, migrants, and children are found in the non-binding preamble. The agreement explicitly states that ‘Article 8 of the Agreement [on loss and damage] does not involve or provide a basis for any liability or compensation’. This is highly problematic, as it precludes any liability of those countries with the largest responsibility for climate change (both historically through emissions and today through consumption) for the damage done to those least to blame, but hit worst.

Some encouraging signs: solutions are known

There were a number of encouraging signs at the COP21 that an increasing number of leaders actually understand the need for this paradigm shift. Bolivia had requested the establishment of an ‘International Court for Climate Justice and Mother Earth’, protecting the integrity of Mother Earth and its rights to regeneration. Ecuador had referred to its concept of ‘Buen Vivir’ (good living) or ‘Sumak Kawsay’, ‘a new societal paradigm that places human beings and nature above capital, based on a principle that economic growth in a planet with limited resources cannot be boundless’.

Canada’s Trudeau said that the world has much to learn from indigenous people and Prince Charles delivered an inspiring speech to delegates, linking climate change to food security, extreme weather, migration, conflict and the rights of future generations. Unfortunately, none of these suggestions survived the negotiations on the draft text.

The good news is that the solutions are clear, starting with complete divestment from fossil fuels and a moratorium on extraction well before the middle of the century. It is also necessary to strengthen the rights of indigenous people and guarantee the human right to a healthy environment, as well as the right to participation in environmental decision-making at the local level, and to provide the legal, financial, and technological tools that communities need to adapt and mitigate climate change. All this requires bold action, commitment, and political will.

Political leaders need to be bold enough to put life, well-being, intergenerational and social justice over the protection of selected economic interests. The outcome of the Paris convention is far from ideal, but there are a number of signs that an increasing number of individuals and organisations are re-considering the systemic issues causing climate change and our relationship with nature and future generations.

In five years, when world leaders meet to review their commitments, these voices will be stronger. Paris sent an important signal that together we can protect the basis of life on Earth – but the real work starts only now. It will require everyone – politicians, lawyers, investors, universities, business, environmental defenders, indigenous peoples, NGOs, grassroots movements, and the citizen on the street – to be successful.

Featured image: Pairs of shoes are symbolically placed on the Place de la Republique, after the cancellation of a planned climate march following shootings in the French capital, ahead of the World Climate Change Conference 2015 (COP21), in Paris, France, November 29, 2015. Reuters / Eric Gaillard. 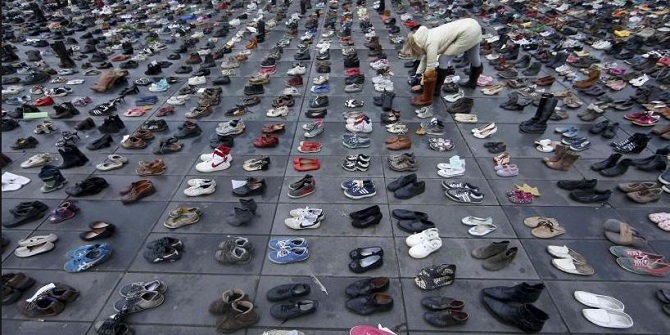