Recent years have seen the rise of anti-smoking campaigns. While these campaigns are often successful at getting people to quit, Sara Evans-Lacko writes that their negativity can lead to the opposite of their intended effect. She argues that the stigma that such approaches bring can lower smokers’ self-esteem, making it harder for them to quit, or make them angry and want to smoke more.

Anti-smoking campaigns are often praised for their success in reducing smoking and hence their impact on improving the public health of the population. Although there is considerable research on the degree to which anti-smoking campaigns are successful at encouraging individuals to quit and thus reducing overall smoking rates, there can also be negative unintended consequences. Designed to reduce smoking, these approaches could instead undermine the abilities of those affected, particularly those who are most vulnerable, to quit smoking.

Tobacco control policies include a range of approaches, for example, comprehensive smoking bans, media campaigns and pictorial warnings on tobacco products in addition to restrictive anti-smoking policies instituted by some organisations such as prohibiting the hiring of smokers or requiring higher insurance premiums. Alongside increasingly negative public attitudes towards smokers, these approaches can make it harder for people to quit smoking because they become angry, defensive and the negative messages lead to a drop in self-esteem. These types of social control strategies, which are employed in an effort to reduce the prevalence and incidence of smoking and reduce exposure of non-smokers to second-hand and third-hand smoking may actually further marginalize ‘residual smokers’ who may be more disadvantaged and have fewer resources to help them quit.

While not always considered acceptable throughout history, a few decades ago, smokers were revered as “cool,” and “mysterious” invoking images such as the Marlboro Man. However, in recent decades the social status associated with being a smoker has diminished. A review of almost 600 articles suggests that there is good evidence that the public stigma of smoking has increased over the last decades and currently, the stereotypes that smokers deal with are almost universally negative. In multiple studies, smokers used words such as “leper,” “outcast,” “bad person,” “low-life,” and “pathetic” to describe their own behaviour. One study found that 30-40 per cent of smokers felt high levels of family disapproval and social unacceptability and 27 per cent felt they were treated differently due to their smoking status. Another study found that 39 per cent of smokers believed that people thought less of them. 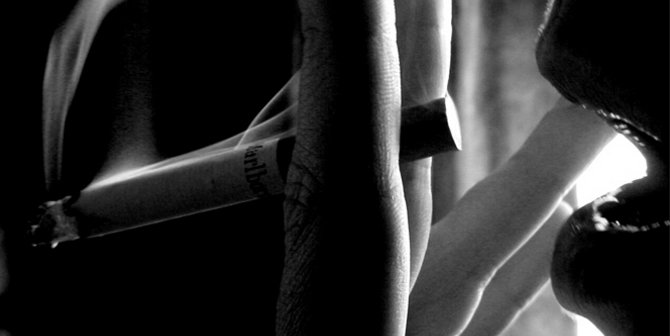 There is broad consensus regarding the impact of smoking on individual and public health and considerable research on the degree to which anti-smoking campaigns are successful in encouraging individuals to quit and in reducing overall smoking rates. Yet, little is known about how those who smoke cope with smoking-related stigma that may stem from these strategies and the negative consequences of smoking-related stigma on those who smoke. Of particular concern are the potential consequences of internalizing public stigma which is referred to as self-stigma or internalized stigma as they are likely to vary for individuals. For example, the public stigma of smoking could result in four potential outcomes for smokers. The desired outcome and the one often assumed by public health practitioners is that smokers will internalize the stigma and quit smoking in order to feel better. However, there are at least three other potential outcomes which can be detrimental: (1) the smoker internalizes the smoking stigma, loses self-esteem and self-efficacy, and fails to quit smoking, (2) the smoker resists internalizing the smoking stigma remaining indifferent and fails to quit smoking, or (3) the smoker resists smoking stigma internalization, may become angry and defensive at the public for stigmatizing smoking, fails to quit smoking and may even increase their self-esteem and self-efficacy regarding smoking.

The stigma surrounding smokers leads to a number of different outcomes, including relapses, increased resistance to quitting, self-induced social isolation and higher stress levels. While the evidence shows that stigmatising smoking may prompt some individuals to quit, health policies should focus on more positive strategies, reinforcing the benefits of giving up smoking rather than reiterating negative stereotypes. Currently, there may be an overreliance on strategies which focus on negative reinforcement including strategies to change smoking norms and increase smoke-free public spaces as well as more structurally stigmatizing policies such as basing hiring decisions and health insurance costs on smoking status. Public health smoking prevention and cessation strategies need to emphasise a greater inclusion of interventions and policies that focus on positive reinforcement and treatment in order to reduce smoking prevalence while avoiding the stigmatization of smokers.

This article is based on the paper, “The downside of tobacco control? Smoking and self-stigma: A systematic review” in Social Science & Medicine.

Sara Evans-Lacko – LSE Personal Social Services Research Unit
Sara Evans-Lacko is an Associate Professorial Research Fellow at the LSE’s Personal Social Services Research Unit (PSSRU). She  is a mental health services researcher with a particular interest in the role of health services and social support in the prevention and treatment of mental illness. Her research focuses on developing innovative methods to improve access to and quality of mental health care for young people and cross-cultural applications of this in addition to the evaluation of public health interventions such as the Time to Change anti-stigma campaign which aim to improve important changes at the population level.