Elections are important; voters are asked to choose who they think will best represent their interests for the next four years across a large number of issues and policy areas. André Krouwel, Yordan Kutiyski and Pat Beck II have developed a new voting advice application to help voters decide which candidate best suits their own views and preferences. Using this tool, they are also able to identify just how far away from one another the current field of presidential candidates are on issues such as taxes, healthcare, the economy, law and order, national security, and gun control.

The differences between the candidates for the US presidency on both sides of the political divide are more than apparent for those following the election campaign. Next to the mainstream candidates one would expect to see running, such as Hillary Clinton and John Kasich, radical competitors in both the Democratic and Republican brackets have gained undisputed prominence. A self-defined socialist – Bernie Sanders – has managed to attract considerable support beyond the traditional Democratic voter base. Similarly, Republican Donald Trump has capitalized on a strong anti-immigration rhetoric and appears to stand a real chance in the electoral race. Both Trump and Sanders can be described as political outsiders, considering their background: Trump planned to run as an independent and joined the Republican contest at the very last moment; Sanders has been the longest-serving independent in US congressional history, only joining the Democratic Party in 2015. However, the rift between Democrats and Republicans would be evident, even if Sanders and Trump were not running. The two parties now display very distinct visions of how the country should be governed. A new online tool aimed at helping voters make a well-informed choice has captured this political development.

Election Compass USA is a voting advice application (VAA) developed with the purpose of aiding voters to choose the candidate that best suits their own policy preferences. Developed by a team of international and American political scientists, the online tool provides its users with personalized ‘vote advice’ after they answer 30 relevant issue-statements related to the policy matters that dominate the public debate. The two-dimensional graph representing the political landscape of the United States of America is based on political science literature about political lines of division and incorporates the two most salient issue dimensions in US politics. The horizontal dimension is related to economic issues that tap into the traditional left-right dimension, while the vertical axis is related to moral values that demonstrate the difference between a liberal and conservative outlook in life. The ‘material’ socio-economic Left-Right dimension refers to economic aspects of political competition: unemployment, wages, pensions, taxes, the welfare state and public finance. The moral-cultural, non-material dimension incorporates issues that purport to immigration, (religious) values, identity, the environment and foreign policy, among others. Based on the responses selected for the 30 issue-statements, the user is placed spatially on the two axes.  All relevant presidential candidates have also been positioned on these issues on the basis of their policy stances as expressed in electoral programs, official websites and media appearances.

As Figure 1 below shows, the political atmosphere in the US is currently permeated by polarization. Democrats and Republicans share neither a common vision for the cultural outlook of the country nor the most suitable path for economic development. It is particularly interesting that Democratic candidates are rather detached from the political center, while Republican candidates like Ohio Governor John Kasich have rather centrist stances.

When the landscape is adjusted to only take the themes ‘taxes and economy’, ‘education’ and ‘healthcare’ into account, it is evident that there are considerable differences between the economic proposals of Democratic and Republican candidates (see Figure 2). This clearly shows that the two parties have very distinctive visions in terms of their ideas on how to run the economy. Two particular candidates stand out at completely opposed, economically radical positions: Bernie Sanders is positioned on the far-left of the economic axis, while Rand Paul occupies a far-right economic position.

Figure 2 – 2016 US Political Landscape, with ‘taxes and economy’, ‘education’ and ‘healthcare’ themes selected as important

The polarization is even more obvious when only themes such as ‘immigration’, ‘law and order’ and ‘national security’ are taken into account, and the positions on the landscape are recalculated (see Figure 3). While some Republican candidates have rather moderate stances on these matters, Donald Trump stands out as an ‘outlier’ on the far ends of the conservative/right-wing quadrant. The positions of all Democratic candidates are nearly diametrically opposed to that of Trump. While Bernie Sanders is positioned in the far-left, liberal quadrant, Hillary Clinton is closer to the center, but still very much detached from the position of any Republican candidate.

Figure 3 – 2016 US Political Landscape, with ‘immigration’, ‘law and order’ and ‘national security’ themes selected as important

To delve deeper into the nature of polarization, one can see the positions of each candidate on every issue-question, in a matter of a few mouse clicks. Figure 4 below reveals the clear divide between Democrats and Republicans on the economic dimension. While all Republican candidates strongly reject tax hikes on wealthier Americans, all Democratic candidates are in favor of such a measure.

Figure 4 – Positions of presidential candidates on the statement: “To reduce the federal deficit taxes should be raised on people with higher incomes” 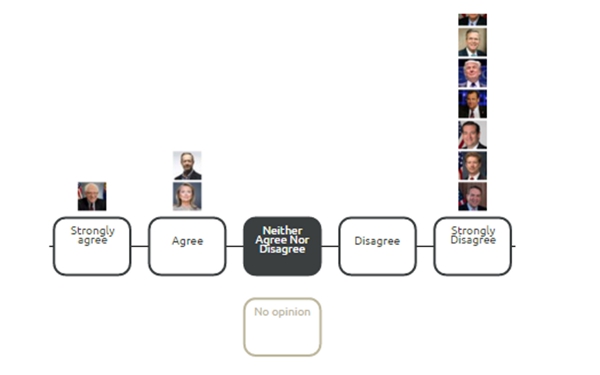 Figure 5 below exemplifies that deep divisions do not exist only in the economic sphere, but also on moral-cultural matters: a clear rift between Republican and Democratic candidates is visible on the issue of gun purchasing. Following Obama’s pledge to restrict gun purchases in the US, all Democratic candidates would strongly support measures aimed at curbing gun sales. Conversely, no Republican candidate has indicated their willingness to work towards gun control.

Figure 5 – Positions of presidential candidates on the statement: “It should be made more difficult for people to buy guns” 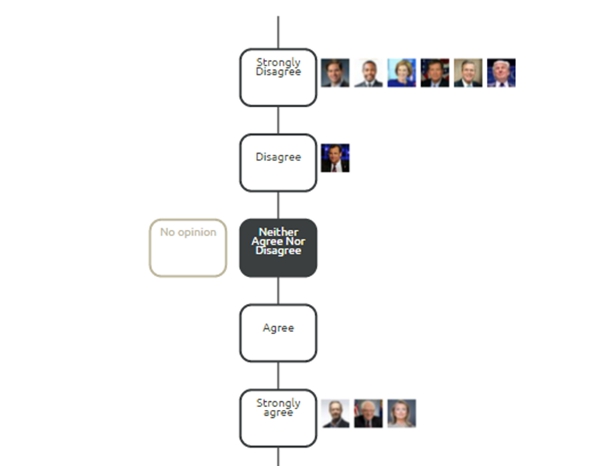 André Krouwel – Free University (VU) in Amsterdam
André Krouwel is associate professor at the Department of Political Science and the Department of Communication Science at the Free University (VU) in Amsterdam and is Academic Director of Kieskompas (Election Compass). His latest book is Party Transformations in European Democracies (SUNY Press, 2012).

Pat Beck II – LSE
A graduate of UC Berkeley, Pat Beck II is a MSc and MA candidate in a dual degree program between London School of Economics and Political Science and Sciences Po – Paris.