How having a college education can add a decade or more to your life expectancy.

How having a college education can add a decade or more to your life expectancy.

That there are gaps in the life expectancies between different groups is very well known – but what about the effect of education on how long people are expected to live? In new research, Isaac Sasson looks at the effects of having a college education on the life spans of different groups. He writes that white women with a college education can expect to live 9 years longer than those without a high-school degree, a difference that is nearly 12 years for white men, and almost 5 and nearly 9 for black women and men. He also finds that college-educated Americans have far less variation in their life spans compared to those with less education, who are more likely to die prematurely.

The concept of life expectancy at birth is well-understood by most people: the average age in which babies born today will die if death rates throughout their life course resemble those today. We have known for decades that in the US, on average, women live longer than men; whites live longer than blacks; and the rich and well-educated live longer than those with low socio-economic status. Although similar gaps are observed across Europe and in other high-income countries, they tend to be much larger in the US.

What we are only recently beginning to understand, however, is that educational attainment is becoming the single most important social determinant of longevity in America. My new research shows that whereas the gender and black-white gap in life expectancy diminished in recent decades, the educational gap in life expectancy has more than doubled from 1990 to 2010. College-educated white women are expected to live 9.3 years longer than their low-educated counterparts—those who have not completed high school—compared with only a 2.5-year difference in 1990. Among white men, the same gap amounts to a whopping 11.9-year difference (and, respectively, 4.7 and 8.6 years among black women and men).

Even more disturbing is the fact that life expectancy at age 25 declined among low-educated white Americans by 3.1 years for women and about one half year for men since 1990. Such sustained decline in longevity is unprecedented in the US and in most other rich countries for over a century. Among white Americans who have finished high school, life expectancy increased by less than six months since 2000—a very modest increase by historical standards. Last but not least, the college educated benefited from a significant rise in life expectancy over the past twenty years, about 3.7 years for women and 5.2 for men. 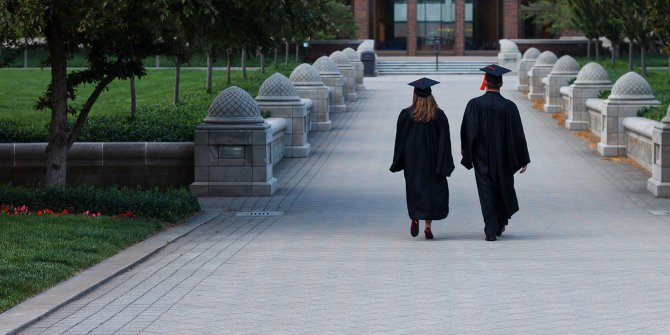 On a positive note, black Americans have enjoyed a dramatic increase in life expectancy since 1990—across all education groups—but unfortunately still lag behind their white counterparts.

But unlike previous studies, which focus on group differences in life expectancy, I went one step further and investigated educational differences in life-span variation. Variation is perhaps the second most important measure in statistics—the first being the average—summarizing the extent to which observations are spread around the average. For example, we can observe two populations with identical life expectancy but, from an individual perspective, the one with larger variation in life spans will have greater uncertainty in the age of death. If life span variation is very small, most deaths are concentrated close to the average; if variation is large, some individuals will die prematurely whereas others will survive to very old age.

Looking across education groups, my research shows that college-educated Americans not only live longer, on average, but they also have the lowest life-span variation. In other words, most of them will die at a very old age and, importantly, roughly at the same age. Life expectancy among low-educated Americans is not only significantly lower, but they show much larger variation in life spans, which has grown since 1990. In part, this is because many more of them now die from premature and potentially preventable causes of death.

To put it concretely, if you had to bet on how long you will live, your best bet would depend more than anything else on your educational attainment. As a college-educated white woman, your most likely age of death is narrowly concentrated around 90. For a low-educated white man, you are almost as likely to die at 60 as you are at 85 (see full research article below for other population groups).

Although betting on how long we will live may seem like an odd endeavor, this is precisely what we do, whether implicitly or explicitly, when we make decisions throughout the life course. How much should I save for my retirement and when should I retire? Should I take that 30-year mortgage to secure my housing situation in old age? And will I live long enough to assist my children or leave an inheritance after me?

Variation in life spans also affects the social and economic institutions planning for our old age, including the Social Security Administration and programs like Medicare. They too have to balance between contributions and benefits in an era of growing uncertainty about how long we will live. Perhaps more fundamentally, the growing inequality in life spans—both in average and in variability—raises questions concerning distributive justice. For example, if those at the lower rungs of the socio-economic ladder are less likely to survive to old age—and, importantly, face greater uncertainty about their chances of survival—should we institute a differential retirement age? And what would such a scheme look like? Indeed, this type of questions is far more complicated than that of averages and variation—and should extend far beyond the walls of academia.

This article is based on the paper, “Trends in Life Expectancy and Lifespan Variation by Educational Attainment: United States, 1990-2010” in Demography.

Isaac Sasson – LSE Social Policy
Dr Isaac Sasson is a Fellow in Population Health, Department of Social Policy at the LSE. His Interests are the social determinants of health, educational disparities in adult mortality, stratification and the life course, and statistical methods.