There has been little discussion of the impact of Hillary Clinton’s gender on her electoral prospects, but are American men really ready for a female President? Looking at the results of a new experiment, Dan Cassino finds that the threat to male identity embodied by Clinton is costing her as much as 24 points among men, and bringing her down by 8 points overall.

While most of the attention in the 2016 Presidential primary has been focused on the Republican race, there’s one strange finding on the Democratic side that bears exploring: self-identified socialist Bernie Sanders typically does better in national head-to-head match-ups than frontrunner Hillary Clinton. A new study shows why: many Americans just aren’t ready for a woman President.

One of the main reasons Clinton’s numbers are lower than they would be otherwise is gender role threat, which is costing her as much as 24 points among men in the likely match-up with likely Republican nominee Donald Trump in November. Volumes of research in sociology have shown how men respond to perceived threats to their masculinity: in the face of personal or societal threats to their masculine identity, some men become more likely to endorse anti-gay stances, pro-gun policies, or anti-abortion views.

For instance, men who feel that their gender role is threatened by a wife who earns more money than they do may become more likely to embrace religious justifications for male superiority, or play up their role as the protector of the household. In this case, gender role threat is leading to increased support for Donald Trump, and decreased support for Clinton among men.

In the study, a randomized experiment was embedded in an otherwise normal political survey of likely voters in New Jersey. Half of the respondents were asked about the distribution of income in their own households – whether they or their spouse earned more money – before being asked about their preference in the Presidential general election. The other half were only asked about the distribution of income in their household at the end of the survey. This question was designed to remind people of disruption to traditional gender roles, without explicitly mentioning Clinton or a female president, and simulate the sorts of subtle gender-based attacks that can be expected when Clinton is a general election candidate.

The effects of the gender role threat question are enormous. As Figure 1 shows, men who weren’t asked about spousal income until after being asked about the Presidential election preferred Clinton over Trump, 49 to 33. However, those who were reminded about the threat to gender roles embodied by Clinton preferred Trump over Clinton, 50 to 42. Concerns about gender role threat shifted men from preferring Clinton by 16 to preferring Trump by 8, a 24 point shift. 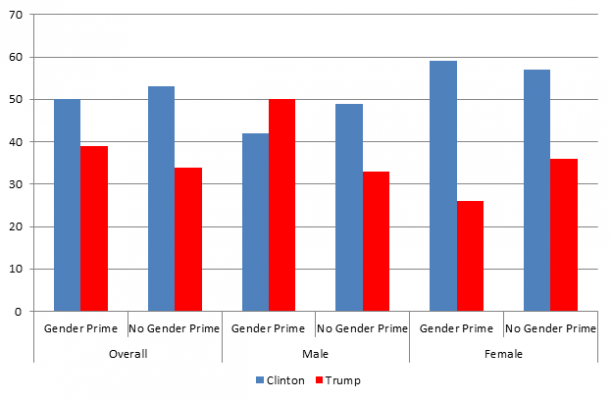 Of course, these effects don’t apply to all men. Past work on these issues has shown that gender role threat tends to polarize men, making liberal men hold more liberal views, and conservative men hold more conservative views on gendered issues. For instance, liberal men who earn less than their wives become more likely embrace their role as fathers and caregivers, and become more supportive of abortion rights and pay equity. So, the prospect of a female president may increase support for Clinton among a subset of liberal men, even if the overall effect on men is likely to be very negative.

The upside for Clinton is that the same gender role threat that costs her so much among men helps her – a bit – among women. Women who answered the Presidential questions first preferred Clinton by 21 points; those who were asked about spousal income first preferred Clinton by 33 points. That gain among women helps to offset the losses among men, but doesn’t come close to fully cancelling it out. In total, concerns about gender role cut Clinton’s lead over Trump from 19 points – 53 to 34 – down to 11 points, 50 to 39, without having any impact on Sanders’ margin over Trump. 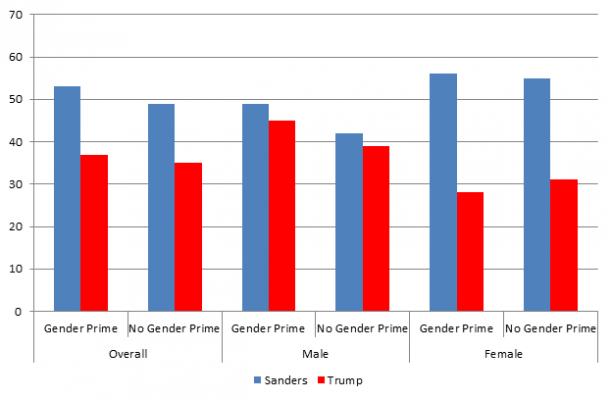 So, Sanders’ advantage over Clinton in the general election polls doesn’t necessarily have anything to do with his appeal to young people, or his policies: his advantage can be explained entirely by the fact that he’s a man. While gender hasn’t been an explicit issue in the Clinton campaign yet, it is already having a substantial effect, as American men aren’t nearly as ready for a female president as most observers seem to think they are.