Immigration has once again become a controversial issue on both sides of the Atlantic, with many concerned about how immigrants integrate into the countries they have moved to. In new research, Monica Boyd and Amanda Couture-Carron examine how the political participation of immigrants in Canada is influenced by their marriage or cohabitation with someone who is native born. They find that foreign born residents with Canadian partners are more political than their counterparts who are married to those who are foreign born, as are their grandchildren. They write that the native born may provide more insight into Canada’s politics and institutions, thus making political participation easier for their partners.

From Donald Trump’s scaremongering about Mexicans to concerns about the influx of Syrian refugees into Europe, immigration is again at the top of commentators’ and politicians’ concerns across the world.  Many of these questions and concerns revolve around perceptions over the integration of immigrant groups into their host societies. One indicator of integration is whether or not the migrant partners with someone from the settlement country or with someone born there. These types of relationship also are related to other aspects of integration, such as economic and political integration. Studies do document that cross-nativity partnering has positive effects on economic integration; but until now, the links between cross-nativity marriages and cohabitation and political participation have not been examined.

We then measure political participation in two ways – voting (or not) in the most recent federal election (for those eligible) and participation in seven political activities within the past 12 months. These activities include: searched for information on a political issue, volunteered for a political party, expressed views on an issue by contacting a newspaper or a politician, signed a petition, boycotted a product or chosen a product for ethical reasons, attended a public meeting, and participated in a demonstration or a march. 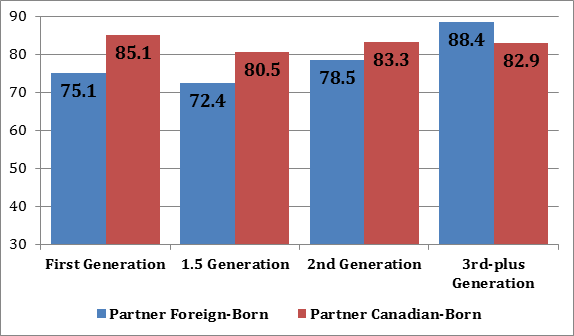 If we look at the percentages who have participated in at least one political activity in the 12 months before the GSS survey, we see the same patterns – except for this measure of political participation, the second generation is more similar to the third generation. For both Canadian-born groups, the percentages engaging in one or more political activity are higher for those who have foreign-born spouses.

Figure 2 – Percentages with One or More Political Activities, by Generation Status & Nativity of Partner, Married or Common-law Population, Age 25-64, Canada 2008 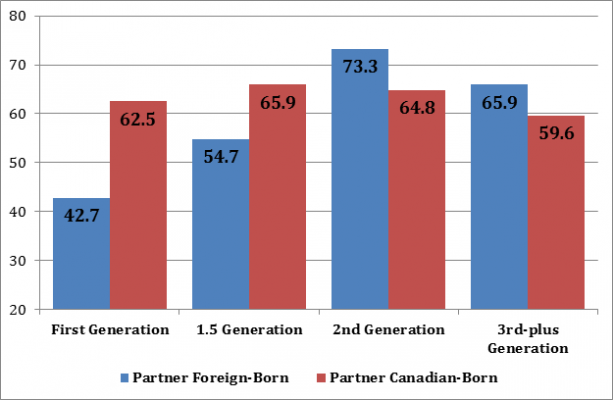 Our new results indicate what would be observed in comparison to the Canadian-born third generation with Canadian-born partners if everyone in the study were socio-economically similar. Together with our basic results (Figures 1 and 2) these hypothetical results produce four main conclusions:

Our research is the first in the field to use survey data to study the relationship between cross-nativity marriages and political behaviour. Additional research is needed to determine exactly how cross-nativity partnering promotes political integration for the foreign-born partnered with the native-born. But, studies on the relationship between cross-nativity marriages and economic success (usually defined as income or earnings) provide three important insights into possible processes.

Finally, research suggests that cross-nativity marriages accelerate immigrants’ attainment of human capital. Studies of economic integration taking this position argue that there is a “spillover” of human capital from the native-born partner to the foreign-born partner. For example, having a native-born partner can help the foreign-born partner learn the language of the settlement country faster, which then impacts earnings and employment rates. If cross-nativity marriage advances immigrants’ destination country language and labour market skills, we also can expect these skills to facilitate political integration since language skills and higher economic status are also associated with political participation.

This article is based on the paper ‘Cross-nativity Partnering and the Political Participation of Immigrant Generations’ in the Annals of the American Academy of Political and Social Science.

Monica Boyd – University of Toronto
Monica Boyd holds the Canada Research Chair in Immigration, Inequality and Public Policy at the University of Toronto. She publishes in the areas of gender stratification, ethnic and racial stratification, immigration policy, the labor market integration of immigrants, and the social and economic integration of immigrant offspring.

Amanda Couture-Carron – University of Toronto
Amanda Couture-Carron is a doctoral student at the University of Toronto with an interest in immigrant integration, specifically in the post migration difficulties of migrants. With her colleagues, Amanda has published in the areas of battered immigrant women and second-generation young adult acculturation stress as well as on these groups’ perceptions and experiences of dating.