Tuesday saw New York billionaire Donald Trump win Indiana’s presidential primary, and his rivals, Ted Cruz and John Kasich suspend their campaigns. Trump now has a clear path to the Republican nomination. Andre P. Audette looks at why Trump was so successful in the Hoosier State, despite polling 16 points below Cruz in April. He writes that Trump was able to shift the public narrative of Cruz, naming him “Lying Ted”, a sobriquet which the Texas Senator was unable to shake.

Political pundits proclaimed the Indiana primary to be the last stand for the candidates trailing the Democratic and Republican Party frontrunners. And the results did not disappoint: the state known as the Crossroads of America has placed the presidential race at a crossroads as well. Now-presumptive GOP nominee Donald Trump ran away with the state, forcing his last competitive rival, Ted Cruz, out of the race. On the Democratic side, Bernie Sanders picked up a morale boost and new leverage to influence the Party, but was mathematically eliminated in terms of pledged delegates. After Indiana, it is clear that the Trump and Clinton campaigns will now pivot to the general election, but not without reaching out to their competitors’ supporters.

How The Donald Notched His “Yuge” Win

The profile of Republican voters in Indiana would seem to be ripe for a Ted Cruz victory. The state is home to the Indy 500, a large swath of Evangelical Christians, and according to preliminary exit polls, a number of “very conservative” voters. Cruz barnstormed the state, announcing and campaigning with his vice-presidential running mate, Carly Fiorina. One poll in mid-April even had Cruz beating Donald Trump by 16 percent. How, then, did Trump beat Cruz by nearly that number on election night?

The answer boils down to something Donald Trump is well-experienced with: maintaining one’s brand. While Trump was picking up a trifecta of Indiana sports endorsements and sticking to his job-creating message, the Ted Cruz campaign was managing hecklers and pushing a socially conservative message on transgender rights that did not match well with the concerns of Hoosier Republicans. Like Jeb Bush and Marco Rubio before him, Trump was able to shift the public narrative of Ted Cruz, giving him an air of desperation and attributing to him a number of less-than-desirable traits.

One moniker that seemed to stick to Cruz came from a March 3rd debate in which Trump labelled him “Lying Ted.” At Trump rallies throughout Indiana, this became a rallying point against Cruz. To highlight this example, Figure 1 shows the popularity of the search term “Lying Ted” relative to other searches on Google. The first peak comes in mid- to late-March as Trump was picking up wins in Illinois, North Carolina, Florida, Missouri, and Arizona. We then see a precipitous drop in “Lying Ted” searches around the time that Cruz regained steam by winning the Wisconsin primary. However, the term’s popularity actually reached its highest peak right before the Indiana primary – demonstrating the success Trump had in derailing Cruz’s message in the Hoosier state. 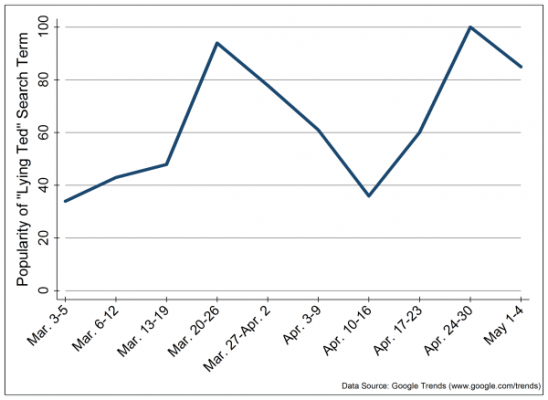 Trump wasn’t alone in changing the Cruz narrative either. Former US House Speaker, John Boehner remarked that Cruz was “Lucifer in the flesh,” while comedians mocked Cruz as being inhuman, a lizard king, and a Zodiac Killer lookalike. Taken together, these attacks on the Cruz brand were enough to sink his candidacy. After all this, however, Donald Trump extended an olive branch to Cruz supporters by thanking him and calling him “a tough, smart guy.” These sorts of gestures will become even more important as the Trump campaign shifts gears to focus on the general election, preventing a third party candidate, and shoring up his support amidst historic unpopularity numbers.

Bernie Wins, but Loses Even More

On the Democratic side, the underdog candidate, Bernie Sanders, was successful in pulling off a surprising upset. But despite taking Indiana, Bernie’s path toward the nomination actually grew even steeper, requiring him to win over 60 percent of the remaining delegates, a highly improbable feat. Meanwhile, Hillary has suggested with even more strength that she is now focused on defeating Trump in the general election. What Bernie did not win in delegates, however, he did win in political clout, which he can use to shape Clinton’s run this year and the Democratic Party for years to come.

According to exit polls in Indiana, Sanders’s win was again fueled in large part by high turnout among young liberals – a key demographic that the Democratic Party will hope to mobilize in future elections. In addition to votes, importantly, Sanders also picked up monetary support and data files that are coveted by Democratic elites. These resources become leverage for Bernie to shape the party platform, nomination rules, and perhaps even Hillary’s vice presidential selection (for instance, to get Elizabeth Warren of Massachusetts or Ohio’s Sherrod Brown, two likeminded liberal senators, on the VP shortlist). What is clear is that Bernie’s surprising success cannot be taken for granted if Democrats hope to truly engage the next generation of party activists.

As Hillary pivots to the general election after the Indiana primary, how she reaches out to Bernie Sanders and his supporters in coming weeks may dramatically alter the party base. This will be a delicate balance, since Sanders is expected to stay in the race through the California primary. Sanders has also suggested that he intends to win, but if not, that Clinton will have to win over his supporters by herself. In doing so, Clinton has already become a different candidate than she would have been otherwise, and Indiana is just the latest proof of Bernie’s success in influencing the presidential race.

The Crossroads of American Elections

In 2008, Barack Obama stunned John McCain by moving Indiana from red to blue. Current projections suggest that Trump has a comfortable lead over Clinton, and the primary results offer further evidence that Indiana will stay in the Republican column come Election Day, barring dramatic changes to the political landscape. However, the Indiana electorate has done its part in winnowing the field and shifting focus to the general election. Political scientists will be studying the 2016 election for many years to come, and Trump’s brand name and Clinton’s success in winning over the next generation of Democratic voters will be a key component to understanding the Indiana primary and American elections at their current crossroads.

May 4th, 2016|2016 Presidential Election, Andre P. Audette, Elections and party politics across the US|0 Comments
Previous post Next post