Last week saw accusations that the social media giant Facebook, routinely suppresses conservative news sources. Facebook is so dominant in the US media scene, concern has reached as high as the US Senate, with Senator John Thune querying Facebook CEO Mark Zuckerberg as to how the site’s ‘trending topics’ feature is implemented. R. Kelly Garrett writes that given the likely number of conservatives using the site, it would not be good business sense for it to be biased against right-leaning news sources. That said, Facebook’s curators might be unintentionally biased against conservative media; at the same time, conservatives might be more likely to see Facebook as having a liberal slant, even if it is actually unbiased.

It’s a provocative headline: “Former Facebook workers: We routinely suppressed conservative news.” In the story, two anonymous former “news curators” who had worked at the widely used social networking site accuse the company of systematically excluding important conservative news from its “trending topics” service. This bias purportedly affects both conservative news topics, such as CPAC, and right-leaning news outlets, such as RedState or NewsMax. Further, the Gizmodo article asserts that curators routinely “inject” political content that did not emerge organically from users’ posts, but which Facebook staff deemed important.

A day after the story broke, Senator John Thune, a Republican from South Dakota and Chair of the Committee on Commerce, Science, and Transportation, sent a letter to Facebook CEO Mark Zuckerberg in which he posed a number of questions about the service. He asked that the company provide details about how the trending topic feature is implemented, to describe the role of news curators, and to indicate whether there are records that could be used to assess curators’ potential biases. 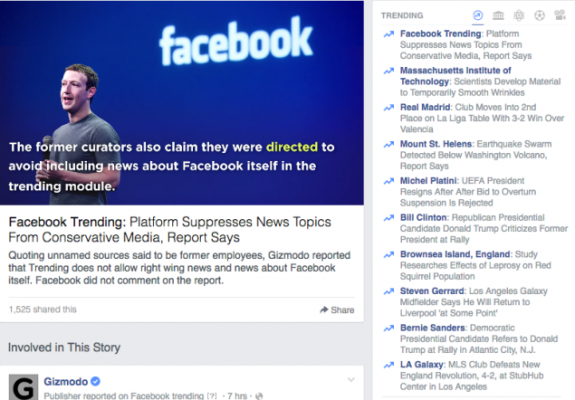 In response, Facebook has published multiple statements about the policies that guide the curation of trending topics (here, here, and here), and it has released a redacted version of the company’s internal trending review guidelines. In all of these documents, Facebook insists that its approach to news curation is politically neutral.

That Facebook claims neutrality should not be a surprise given the number of conservative users the service has. There are an estimated 192M registered Facebook users in the US—fully three-quarters of the adult population—and 37% of Americans identify as conservative. Even if one ignores Facebook’s claims that it wants to promote relationship building and understanding, the prospect of alienating a third of its customers is surely worrying to company executives. Facebook may be the current leader of the online social networking world, but it knows better than to take that status for granted (see: Myspace). There are no shortage of companies eager to step up if Facebook falters, and a decision to ignore the needs and interests of a significant number of users would provide just such an opportunity.

There is precedent for competition to promote political diversity in the news. Rivalry in the US news markets in the early 20th century was often linked to newspapers’ ideological diversity in those markets. This is at least in part because biased coverage can harm a news organization’s reputation in the presence of competition. Reputation effects are not the only reason that a company like Facebook might want to preserve diversity in trending topics, though. Like many other online services, Facebook regularly adjusts how it makes content recommendations in order to create what it says is a better user experience. Scholars, myself among them, have conducted numerous studies of news consumer preferences. The research suggests that although most people do have an affinity for information that includes support for their viewpoint, they don’t systematically avoid news that also includes other perspectives.  In other words, Facebook has the best chance of satisfying its large and diverse user base by ensuring that multiple perspectives are included in their recommendations.

How do we explain these starkly different accounts of Facebook’s strategy for selecting the news topics it promotes? It is possible that one side or the other is lying. The anonymous Gizmodo informants might have an axe to grind with their former employer. And, as noted, Facebook clearly has an incentive to distance itself from accusations of anti-conservative bias.

But there is another explanation worth considering. Decades of research into the hostile media effect have shown that individuals tend to see news media as biased against them. Two individuals viewing the same content will often reach radically different conclusions about its political slant depending on their point of view. A well balanced news article is likely to be characterized as liberal by conservatives, and as conservative by liberals. This can occur for a variety of reasons: individuals may be predisposed to remember disagreeable content, partisans may tend to view the same information differently (a Republican and Democrat might both see a claim as critical of their side), and partisans may have different standards for what constitutes “fair” representation of the competing sides.

Regardless of the precise mechanism, the tendency to see impartial news as biased could explain the former curators’ experience: even if Facebook achieved perfect neutrality, we would expect that these self-described conservative curators would view the stream of content recommendations as exhibiting a liberal bent. This need not be malicious or intentional. To the contrary, the more carefully and thoughtfully people engage in political judgement, the more influential their biases tend to be.

The hostile media effect could also contribute to real—and equally unintentional—bias on the part of liberal Facebook curators. Among the goals of trending topics curation is to raise the profile of important and trustworthy news. To this end, for example, curators are directed to suggest an accompanying news article that “[i]s not biased or sensational”.  For more liberal curators, stories posted in conservative outlet are less likely to be seen as meeting this criterion.

In the end, only by analyzing data can we know whether Facebook’s process for vetting trending topics systematically excludes issues or outlets that are important to conservatives. Regardless of the quality of existing guidelines, conducting this analysis would be a valuable exercise. Unintentional biases can easily find their way into even carefully designed processes.

If the selection of trending topics does exhibit political bias, the challenge for Facebook will be to find new ways to keep it in check going forward. This might mean revising guidelines with an eye toward making curators aware of their biases, as individuals can sometimes correct for biases once made aware of them. Or perhaps Facebook could provide curators with a “dashboard” that continuously displays the aggregate political leaning of outlets and topics they promote or demote.

It is also possible that the current process works well. If the data show that Facebook has successfully guarded against these biases, it is worth remembering that those who made these accusations may well have been honestly reporting their own experiences.

R. Kelly Garrett–Ohio State University
Kelly Garrett is an Associate Professor in the School of Communication at the Ohio State University in Columbus, OH.  His research interests include the study of online political communication, online news, and the ways in which citizens and activists use new technologies to shape their engagement with contentious political topics. His most recent work focuses on how people’s exposure to and perceptions of political information are related to their political beliefs.