The Politics of Race in American Film podcast: Episode 4, Hollywood Representations of Blackness

The Politics of Race in American Film podcast: Episode 4, Hollywood Representations of Blackness 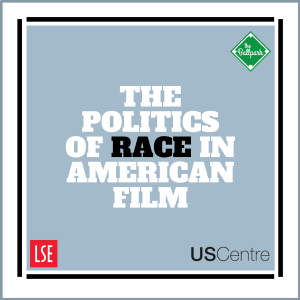 In this episode of The Politics of Race in American Film, Dr. Clive James Nwonka hosts a conversation with Cheryl Bedford (Women of Color Unite), Lanre Bakare (The Guardian), and Sam Mejias (The New School) which looks at films which engage with questions of blackness and race in America during the Obama and Trump eras. These films include Moonlight, Get Out, Us, Queen and Slim, Waves, Harriet, and more recently, Judas and the Black Messiah. What do these films tell us about the politics of race, both within the industry and more broadly in American society, and how we see African American films (or African Americans within film) shaping and influencing the racial politics of the US? What might be next for African American cinema in the era of Joe Biden?

The Politics of Race in American Film is available on Spotify, SoundCloud, Apple Podcasts, the LSE Player, and more. We hope you’ll listen and subscribe to our new podcast and promote it to your networks. We’d love to hear your feedback on the podcast too – you can respond to this email with your comments or join the conversation about the podcast on Twitter with the hashtag, #LSEUSRaceFilm.

Listen to Episode 4 on Soundcloud

The Politics of Race in American Film is hosted by Dr Clive James Nwonka and produced by Michaela Herrmann and Chris Gilson (LSE Phelan US Centre). This podcast series was supported by the LSE HEIF fund. Featured image by Steven Van on Unsplash

Note:  This podcast gives the views of the interviews and co-hosts, and is not the position of USAPP – American Politics and Policy, the LSE Phelan US Centre, nor the London School of Economics.