A large amount of legislating and policymaking that affects Americans is produced by the states rather than the federal government. Often states’ policy choices reflect the ideology of its legislators. In new research, Stefani Langehennig, Joseph Zamadics and Jennifer Wolak investigate whether people’s approval of their state legislature depends on the political lean of the state government’s policies. They find that voters do care: as a state’s policies become more liberal, then liberals’ approval of the legislature increases, while conservatives’ decreases, an effect that is reinforced when people have a higher level of knowledge about their state’s politics.

State governments are taking an increasingly active role in policymaking, legislating in areas that affect Americans’ day to day lives – from education to infrastructure to environmental issues to health and human services.

There are reasons to suspect that people are not responsive to the ideological tenor of policy outcomes in their state.  Even though most people live closer to their state capital than to Washington DC, state politics often seems attract less attention than national political debates.  As the number of reporters in state capitals declines, people may not be following the policy debates within state governments very closely.  If true, people may lack the information needed to hold state legislatures accountable for the policies they produce.

We challenge this notion, and propose that people are better equipped to hold state legislatures accountable than many have suspected. Even though national politics attracts more media coverage than state politics, people are nearly as likely to express interest in following state politics as they are to say the same about the federal government.  Knowledge of state politics is not much lower than knowledge of national politics, as people are only slightly less likely to know which party controls the state legislature as to know which party controls Congress.  In a time of increased party polarization, the distinctiveness of state legislative parties likely helps people recognize the ideological climate of politics in their state. 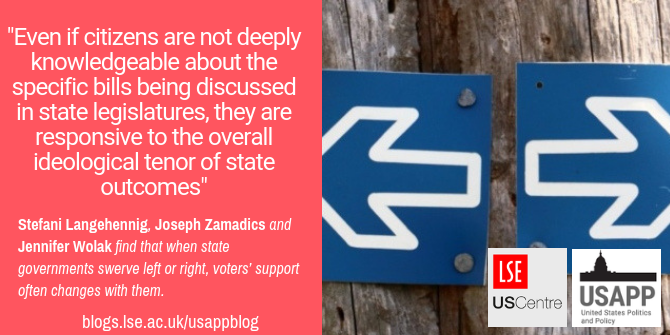 We test this using responses to the 2014 Cooperative Congressional Election Study.  We explore how approval of the state legislature varies as a function of the liberalism of state policy outcomes and the ideological leanings of survey respondents. 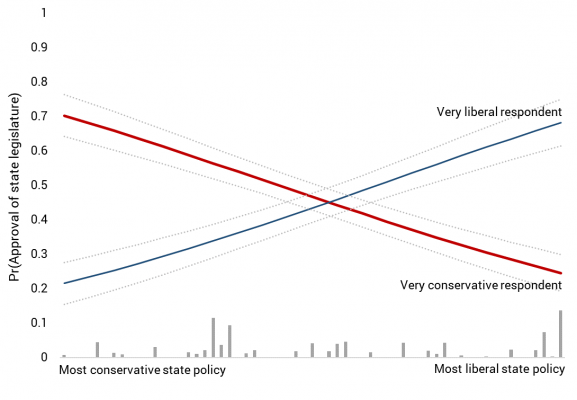 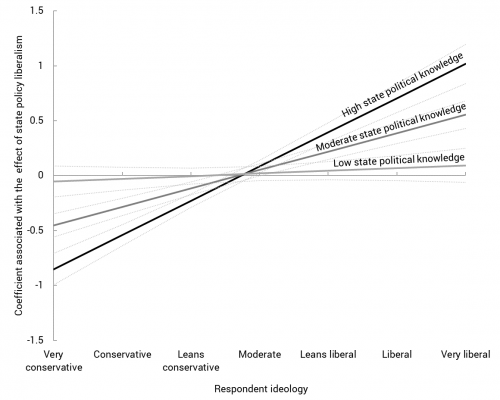 We also draw on panel data from the 2012-2014 Cooperative Congressional Election Study to explore how people’s approval of their state legislature changes as the liberalism of state policy outcomes shifts over time. 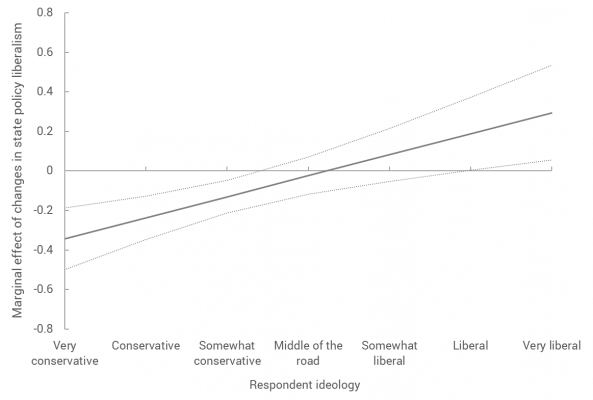