In new research Japonica Brown-Saracino examines differences in GLBTQI identification among demographically similar individuals who live in similar places. Studying four small US cities, she finds that identity is flexible and highly responsive to the deeply local characteristics of the places in which people live.

Popular and scholarly attention increasingly highlights the diversity of GLBTQI experiences and identities.  A 2014 New York Times op-ed called on readers to recognize how the experience of rural LGBTQI individuals departs from that of urban and suburban residents.  Scholars have charted the same, as well as how lesbian and gay identities take different form in suburban, rural, and urban locales.  Others document variation in sexual identities by class and race.

Sociologists typically explain variation in contemporary GLBTQI identities by pointing either to differences in demographic traits among GLBTQI individuals (i.e. variation by race, class, or gender), or to differences in residential location (the urban, rural, or suburban, or the northern or southern).  Yet what explains differences in GLBTQI identification among demographically similar individuals who reside in similar places?  That is the puzzle that I tackled in my recent research. My study of LBQ (lesbian, bisexual and queer) individuals in four small US. cities reveals city-specific “sexual identity cultures” that take shape in relation to local place characteristics.  By “sexual identity culture,” I mean local orientations to sexual identity and difference; that is, dominant local attitudes about self-identity or description, coming out, integration with heterosexuals, and about current politics and popular cultural representations of GLBTQI lives and identities.

My research suggests that identity is flexible and highly responsive to places.  Crucially, I find identities respond not just to differences in scale (urban/suburban/rural) or region (e.g., northern v. southern or coastal v. inland).  Instead, sexual identities respond to deeply particular local characteristics, producing local modes of being lesbian, bisexual or queer.  My study thus cautions us against the turn to categorical explanation for identity heterogeneity and instead calls for us to look to the local, idiosyncratic, and particular if we want to understand how identities take shape.

In 2007 I launched my ethnography of four small US. cities with many natural amenities, higher education institutions, and growing LBQ populations: Ithaca, NY, San Luis Obispo, CA, Portland, ME, and Greenfield, MA.

I began my research in Ithaca, an upstate New York college town.  There I uncovered a nearly universal “post-identity politics” orientation to sexual identity among a wide variety of women (old, young, rich, poor and everything in-between). They wished to live in a place in which they could be out and open about their sexual identity and difference, but they did not want this facet of their self-understanding to define them.  Instead, they preferred to have others regard them as mothers, gardeners, attorneys, teachers, or runners; and they sought social networks predicated on shared tastes, hobbies, and beliefs – not on shared sexual identity.  I wrote about this “post-identity politics” orientation, presuming that I had stumbled upon a new, dominant trend among LBQ individuals – or at least those with the resources to relocate to a “lesbian-friendly” city such as Ithaca.

However, fieldwork in San Luis Obispo, the next site I studied, upended this assumption.  In San Luis Obispo, LBQ individuals nearly uniformly identify as “lesbian.”  I found their social lives to be organized around formal and informal networks composed of other lesbian-identified women.  This swiftly challenged the universality of the “post-identity politics” I had identified in Ithaca.   The relatively similar demographic profiles of LBQ individuals in San Luis Obispo and Ithaca presented a puzzle.  Across all four sites, most informants are white, possess a BA or higher, and have the resources and will to relocate to a small city with somewhat limited employment opportunities (vis-à-vis a major city).  Moreover, on paper the cities themselves appear quite similar.  For instance, they are all cities with populations of under 70,000, serve as county seats, have lefty reputations, possess many natural amenities, and are located in “blue” states.  How to explain the embrace of “lesbianism” in San Luis Obispo and the turn away from it in Ithaca?

This puzzle only deepened in Portland, Maine, where most LBQ individuals articulated hyphenated identities and celebrated the notion of identity as amalgamation.  At concerts, drag revues and coffee shops I met “polyamorous-femmes,” “queer-punks” and “bisexual-feminists”.  Here, as in San Luis Obispo, LBQ residents readily embraced identity-politics, but it was a diffuse micro-identity politics that was very different from the all-encompassing identification with “lesbianism” in San Luis Obispo. 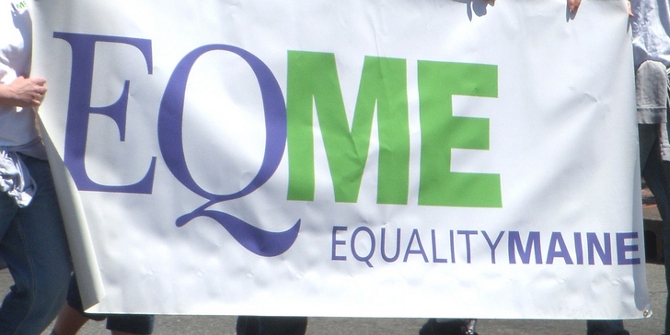 Finally, in Greenfield, MA I encountered a cohort of LBQ migrants who sound much like post-identity politics individuals in Ithaca, and a smaller cohort of longtime LBQ residents who identify as “lesbian-feminists” and maintain social lives primarily organized around Northampton, MA – “Lesbianville, USA” – thirty minutes to the south.

With the exception of Greenfield’s bifurcated identity culture – explained by the city’s position relative to Northampton – the homogeneity of identity orientations within the cities was unmistakable, as was variation across the four study cities.

The diversity of place-distinctive “sexual identity cultures” across four cities that share many attributes and among women who share many demographic traits troubles the dominant view that we have moved neatly and simultaneously from gay pride to a “post-gay” orientation.  It also challenges the notion that variation among GLBTQI individuals emerges from demographic differences (e.g., race, generation, or class) or categorical geographic differences (e.g., nation, state, region, or place scale).

But if extant explanations stop short of explaining my findings, what produces the differences that I uncovered? I argue that my informants’ LBQ sexual identities take shape in relation to the cities in which they live. That is, sexual identity cultures are place-responsive.  They especially respond to numbers and sense of safety and acceptance, place narratives, and what I call the local “socioscape” or the demographic and cultural features of the existing LBQ population.

Take Portland, Maine for example.  There, LBQ residents’ sense of muted acceptance and safety, combined with the fact that lesbian households constitute a moderate proportion of the local population (vis-à-vis the other study cities), encourages an identity-politics orientation (as the same characteristics do in San Luis Obispo).  However, numbers and safety do not explain everything.  If they did, given their similarities in terms of numbers and safety, we would anticipate that Portland and San Luis Obispo would produce much more similar brands of identity politics.  Place narratives that present Portland as cutting-edge, artistic and urban, combined with LBQ residents’ recognition of the highly educated and creative character of their local population encourage a playful and intellectual engagement with sexual identity.   Combined, these forces – numbers and safety, place narratives, and the socioscape – set the stage for the “micro-identity-politics” rampant in Portland.  Among my research sites, only in Portland did I find local drag king troupes, a “butch project”, a Dyke March organized around the theme “Celebrating our Dyke Identities”, and a festival vendor selling t-shirts under a banner reading “individualized visibility for your identity”.  Ultimately, I find that identities are distinct in Portland because Portland, like each of the other sites, is itself distinctive.  That is, despite their categorical similarities the cities are different in ways that are consequential for LBQ identities.  Moreover, I demonstrate that this distinctiveness need not remain unspecified.  By studying four very similar cities with relatively comparable LBQ populations, I was able to identify city attributes that call out different modes of sexual identification.

This research suggests that social identities are highly responsive to local conditions.  Even subtle differences in feelings of scarcity or safety can turn LBQ identities toward or away from identity politics.  And powerful place narratives can influence how local actors interpret place attributes and ultimately themselves.  My book will continue to document the origins and consequences of place-specific sexual identities, and advance my call for further exploration of local identity cultures and of the power of place to shape even the very intimate realm of self-understanding.

This article is based on the article “How Places Shape Identity: The Origins of Distinctive LBQ Identities in Four Small US. Cities,” in the American Journal of Sociology.

Japonica Brown-Saracino – Boston University
Japonica Brown-Saracino is Associate Professor of Sociology at Boston University.  She is the author of A Neighborhood That Never Changes, which won the Urban Affairs Association Best Book Award for 2010 – 2011, and editor of the Gentrification Debates.  Her articles on place and sexual identities have appeared in Social Problems, Qualitative Sociology, and American Journal of Sociology.  She is completing a book for the University of Chicago Press Fieldwork Encounters and Discoveries Series on LBQ identities and lives in four small US. cities.