In the past 18 months, the prevalence of violence, racial injustice and inequality in many communities has come to the fore in the minds of politicians and policymakers in the US. But what if we look to communities themselves for ways of addressing these problems? Joshua F.J. Inwood and Derek Alderman look at how community truth and reconciliation commissions can work to build grassroots responses to difficult local conditions at the same time as the welfare state is retreating. They write that the state’s retreat, while making marginal lives more vulnerable, has opened up new opportunities for activists to develop innovative strategies for achieving social justice.

Across the United States, communities burdened by violence, racial injustice, genocide, and structural inequalities are deploying truth and reconciliation commissions (TRC) to address persistent inequality. US truth seeking is different but related to the international effort to address violence via such commissions.  Many international efforts are related to broader peace processes and usually have some kind of official support structure.  US truth processes are grassroots driven, usually after a period of community activism when it becomes clear that state authorities are uninterested in the events, or complicit in the violence.  Consequently, the US-based TRC process represents an important departure point for questioning and thinking more closely about notions of transitional justice, and serves as a model for community organizing and empowerment in an era of neoliberal governance strategies. This has implications for the ways we understand contemporary urban political development, as well as for the ways we conceive and understand the changing nature of urban governance.

A key component of the truth and reconciliation process focuses on peace building.  Peace building encompasses a wide variety of activities, while the focus remains on preventing the outbreak, recurrence, or continuance of violence.  Norwegian sociologist, Johan Galtung suggests that it takes both negative and positive tasks to build a lasting peace.  Negative tasks generally work towards the prevention of violence.  This includes everything from peacekeeping to the removal of oppressive political regimes.  Positive tasks such as these encourage the growth of social, political, and legal institutions that ameliorate violence.

Given its grassroots nature, it is impossible for truth seeking movements in the United States to engage in many of the negative tasks associated with peace building.  Instead US TRC processes are important vehicles for communities to illuminate geographies of unequal access and patterns of institutional discrimination.  TRCs also give participants the grassroots organizing tools necessary to build communities.  This has particular implications as state government actors have retreated from or privatized many social service provisions in US communities. 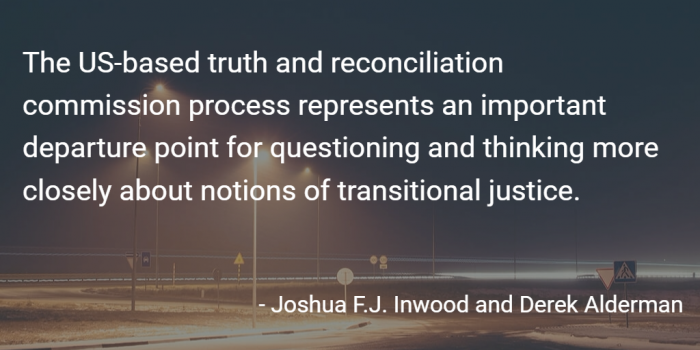 As the welfare state continues to retreat, it is important for peace and justice movements to create interventions that have the potential to transform (and may stand in opposition to) existing state/society relations.  In each of the US TRC movements, groups of oppressed people are struggling to hold the state accountable for past failures to protect their well-being and to affect future democratic change. A central contradiction emerges as oppressed peoples struggle to survive and recover from a history of state-sanctioned violence and inequality within a neoliberal government environment predicated on officially denying and neglecting responsibility for violent legacies.

Within the context of neoliberal modes of production, “violence” is a set of practices in which those defined as having become unnecessary for capital accumulation are expunged from society, and are left to fend for themselves. The structure of TRCs holds potential as a community organizing strategy because it allows activists to take advantage of this contradiction by grounding their engagement in local conditions.  Simultaneously local activists are able to harness the power of the international TRC movement through local grassroots and democratic politics. In doing so, they are creating a process that attempts to convert the retreat by state actors from basic social service provisions into an opportunity to reimagine politics and local political coalitions.

The conversion of the state’s retreat into a political opportunity holds particular purchase for academics and activists who are struggling to deal with the legacies and present realities of precarious lives. Over the last forty years, US state/economy relations have changed with the neoliberal retreat from social welfare provision, as have understandings of violence and the state’s responsibility for addressing these wrongs and protecting citizens’ rights.  While, on one hand, these changes have made marginal lives even more vulnerable, they have also opened new terrain for social justice and activists to reclaim their communities and articulate innovative strategies for achieving social justice.

United States TRCs are examples of diverse communities building grassroots responses to violent conditions and, in the process, expanding our definitions of what peaceful societies might actually look like and come to be formed. This expands a largely academic debate about the theoretical definition of peace to one that is grounded in the hard fought realities of struggle and survivability. The reality of struggle must become central to our understanding of peace and justice and should provide a basis for defining peace. This understanding of peace is practical and concrete and thus reveals contradictions that academics and activists can exploit to create the world we desperately seek.

This article is based on the paper, ‘Addressing structural violence through US reconciliation commissions: The case study of Greensboro, NC and Detroit, MI’ in Political Geography.

Joshua F.J. Inwood – The Pennsylvania State University
Joshua F.J. Inwood (@JoshGeog) is Associate Professor in the Department of Geography and the Rock Ethics Institute at The Pennsylvania State University.  His work connects white supremacy and racism with broader understandings of the political economy.  He also works on transitional justice movements, civil rights, and the geographies of peace.