As the US election season wears on Americans are increasingly exposed to and express outward signs of partisan allegiance: Tweets, Facebook posts, bumper stickers, yard signs, t-shirts, buttons, etc. Some may take such political engagement to signal a robust democracy. But according to our recent research, it could hold harmful social and political implications.

Trust in Strangers, Trust in Partisans, and the Partisan Trust Gap

In our work, we measure trust with actual behavior in an interactive exercise called the “trust game.” It begins with two strangers who receive a sum of money, say $10, and are randomly assigned as Player 1 or Player 2. They are told that the other player will never learn their identity.

Player 1 moves first: she must choose to share some, none, or all of her $10 with Player 2. Player 1 is informed that any sum she shares will be tripled before Player 2 receives it, and that Player 2 will have the same options: to return some, none, or all of it to Player 1. Trust is measured as the amount Player 1 sends to Player 2; the amount Player 2 returns to Player 1 is a measure of reciprocity. Trust and reciprocity facilitate cooperation.

In this basic format, subjects tend to trust Player 2, sending 40 percent of their stake, on average. But when Player 2’s partisanship is revealed, Player 1 discriminates by trusting co-partisans much more than rival partisans. This creates a “partisan trust gap”. Yet this not only, or even especially, an American phenomenon. Indeed, as Figure 1 shows, we observe partisan trust gaps with subjects from Mexico, El Salvador, Chile, Uruguay, Spain, Portugal, and South Africa when they play the trust game using virtual raffle tickets. Most of these partisan trust gaps are as large as or larger than those we observe in the United States. 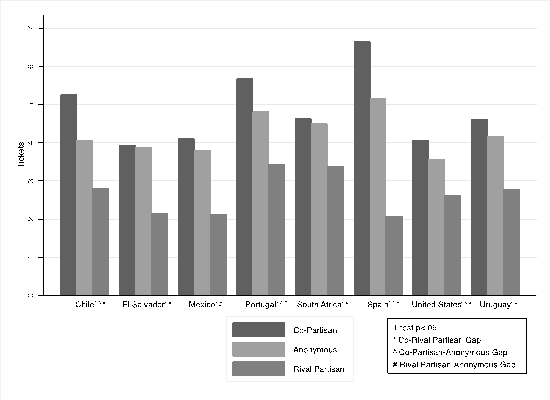 Partisan trust discrimination is problematic because without trust, cooperation is difficult if not impossible. And without cooperation, individuals lose out on its considerable mutual benefits, and society fails to overcome collective action problems that would bolster development, democracy, and human welfare. Moreover, if elected officials adopt these beliefs, it could forestall cooperation on major policy solutions and agreements.

Our initial examination of partisan trust gaps in the United States suggests that gaps are wider among individuals best able to use group-based (partisan) identities and simplifying techniques – or heuristics – to inform their actions, namely, strong partisans and political sophisticates. This evidence encouraged us to extend this theoretical framework and to broaden our sample to other political systems.

To that end our multi-country study incorporates the role of political competition. Based on research in psychology, heightened group competition for resources should induce greater out-group threat, risk of exploitation, and, thus, distrust. In line with this expectation, we find that even after controlling for the strength of partisanship, the more polarized people perceive the political parties to be, the wider their partisan trust gap. This finding holds in all cases for which we have data (the United States, El Salvador, Mexico, Spain, Portugal, and South Africa).

Serendipity granted us additional evidence that political competition drives the partisan trust gap. This time, however, the competition came not from within the same political system but outside it. In early May 2011, we had just completed a study of partisan trust gaps among American university students when Osama bin Laden was killed by US Navy Special Forces in Abbottabad, Pakistan. We extended our data collection another week to observe whether the event – President Obama’s greatest foreign policy achievement to date – might have altered American partisans’ trust in each other.

The results were striking. For students who participated before bin Laden’s death, the average partisan trust gap was 1.45 tickets. After bin Laden’s Death, the gap disappeared. Our analysis suggests much of this reduction owes to increased trust in rival partisans. We attribute the vanishing partisan trust gap to the importance of national identities primed by international competition (rally-around-the-flag effect), which in turn diminished the salience of partisan identities for trust decisions.

Throughout our work, we have tried to rule out other explanations of partisan trust gaps. First and foremost, we show that partisanship is not just another social identity. Long ago, psychologists learned that individuals grouped together by some arbitrary shared characteristic show in-group discrimination. In our national samples from Spain and Portugal we test this notion by comparing partisan trust gaps to trust gaps formed between players randomly assigned to the “Blue Team” or the “Green Team” (which are what we call minimal-groups). Partisan trust gaps were more than twice the size of minimal-group trust gaps. However, the minimal-group trust gaps were roughly the size of other known trust gaps along the lines of gender and age. So when it comes to trust, parties are not merely minimal groups. 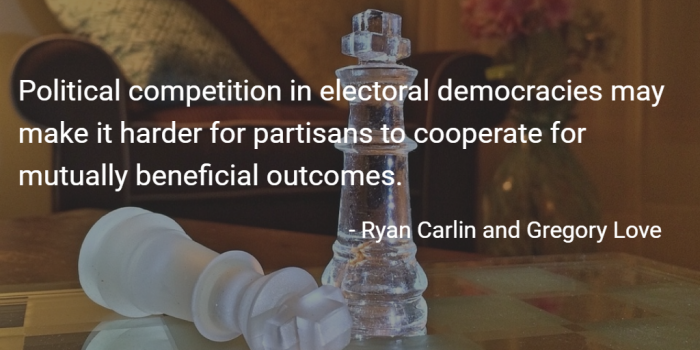 Political competition in electoral democracies may, thus, make it harder for partisans to cooperate for mutually beneficial outcomes. Aggregating up to the level of society and to elected representatives, polarization and competition could reduce the ability of elites to reach compromise and resolve major policy challenges. This is not only unfortunate because it makes individuals and countries worse off. It is also unfortunate because, as we show, shared or rival partisanship is a poor predictor of whether or not strangers are likely to reciprocate, i.e. act trustworthily. What tends to matter more is the extent to which a stranger – regardless of their partisanship – has trusted in the trust game’s first move.

Partyism in the Time of Elections

By way of summary, trust discrimination based on partisanship occur in most electoral democracies, is larger than other potential sources of trust discrimination in society, and changes in relation to the nature of political competition. The tragedy of this form of “partyism,” as Cass Sunstein dubs it, is that it is avoidable to the extent people ignore partisan cues and signaling. Yet elections make resisting such signals nearly impossible for the politically aware because party cues are so widespread, make people stronger partisans, and raise the threat level by showing just how much is at stake in the outcome.

Gregory J. Love – University of Mississippi
Greg Love is an assistant professor of political science at the University of Mississippi. He specializes in the politics of Latin America and developing countries broadly. One of his specific research interests is how political careers develop and change in transitional democracies and how these changes affect the quality of governance. He has conducted extensive field research in Mexico and Chile for this and other projects.