Recent years have seen growing concern over the role of money in politics, with many Americans seemingly believing that campaign money represents quid pro quo corruption. But in new research which uses survey experiments, Todd Donovan finds that people think about campaign money is based on both its source and the amount; Democrats and Republicans see donations to their own party as honest, and to the other, as dishonest. They also found that when money is seen to be spent on negative campaign ads, respondents were more likely to view it as corrupt compared to spending on ads in general.

The US has weak regulations on campaign spending, and a public highly cynical about money in politics.  Campaign finance regulations were eroded in the past decade by the Citizens United decision and other rulings that weakened some disclosure requirements and allowed unlimited independent expenditures directly from union and corporate funds.

Americans were deeply cynical about money in politics before the era of ‘dark money’ and Super PACs. Polls from 2002 showed a near consensus on the idea that contributions to parties, candidates, and independent expenditures on behalf of candidates, earned donors special considerations by Members of Congress.  By some measures over 80 per cent of Americans believe that campaign money represents quid pro quo corruption. We also know opinions about campaign finance are based on low understanding about what is legal.

Reasoning about sources of funds

Prior to Citizens United, the Supreme Court reasoned that, given the capacity of unions and corporations to amass cash, these actors could be subject to regulations that might not apply to individuals.

One of our experiments found Americans also differentiated between the perceived corrupting influence of money in a manner similar to the pre-Citizens United Court.  A bare majority of respondents in a 2012 Cooperative Congressional Election Study experiment thought a direct, $5000 contribution from an individual to candidate was ‘somewhat corrupt’ or ‘corrupt.’ Two-thirds thought the same of $5000 from a corporation or a union.  We find the same pattern when asking about a $1 million independent expenditure from these groups, regardless of a person’s party affiliation. 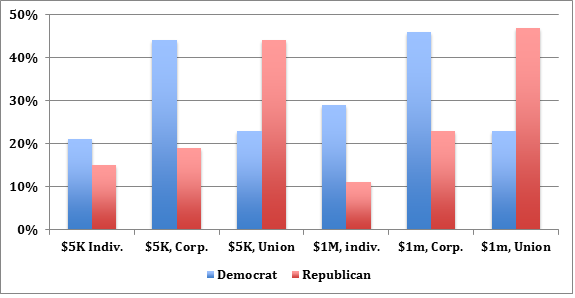 The amounts of money

One might expect that people would view small, $50 contributions as less corrupt that a $5000 contribution (the legal maximum in congressional races at the time).  An experiment asking about money from a generic ‘someone’ found otherwise.  Majorities in an Mechanical Turk  (MTurk) sample found a $50, $500, or $5000 a direct contribution to a candidate to fund the candidate’s TV ads as ‘somewhat corrupt’ or ‘corrupt,’ regardless of the amount they were informed about.

This result may reflect our attempt at keeping the amounts under the $5000 limit to present a legal scenario.  A different MTurk experiment increased the amount, and asked about ‘someone’ spending $5000, $50,000 or $1,000,000 on independent TV ads that benefited a candidate. This allowed varying information about far larger amounts of money, but it required we asked about independent spending in order to describe something legal.

Figure 2 shows that under this ‘independent spending’ scenario, 52 percent of respondents said $1,000,000 was corrupt or somewhat corrupt, whereas only one-third viewed $5000 in those terms. It is noteworthy that these experiments suggest that, while a narrow majority of MTurk respondents found $1 million spent on independent TV ads as corrupting, the previous experiment found that even respondents viewed a direct $50 contribution as corrupting. 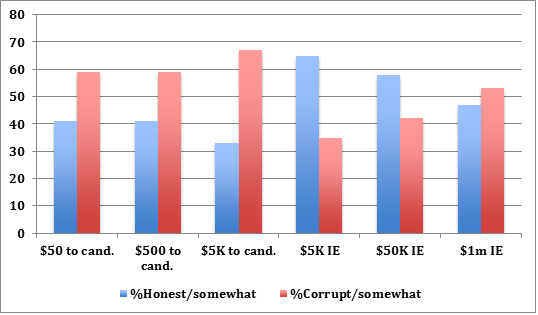 Another view: Are people sick of negative ads?

Surveys finding high levels of cynicism about political money are conducted in a vacuum of information. Our experiments demonstrate this cynicism is moderated by information about the sources and amounts of money, and conditioned by partisan self-interest.

Scenarios in all the experiments presented above informed people money was spent on “TV ads” that “criticized” a candidate.  This being constant, we are confident our experiments establish that attitudes about campaign money respond to the information we provided. That said, the constant description of money being used on ‘critical’ TV ads may inflate levels of cynicism we measure.  A disproportionate amount of campaign money in the US is spent on negative TV ads.

This raises questions about whether survey questions about political money capture attitudes about money corrupting politicians, or also reflect frustration about what the money is spent on. Do high levels of cynicism simply reflect concern about quid pro quo corruption, or might they also reflect a public that is frustrated with being on the receiving end of billions of dollars in spending on negative TV ads?

Another Mturk experiment held constant the source (‘someone’ giving money to a candidate) and amount of money ($5000), but randomly assigned different information about whether the money was spent on ‘campaign ads’, ‘ TV ads’ or ‘negative TV ads.’  The effects were striking.  Under this scenario, only 19 percent said money to ‘pay for ads’ was ‘somewhat corrupt’ or ‘corrupt,’ and just 25 percent said money ‘for TV ads’ was.  But when respondents were told the money was to ‘pay for negative TV ads’, 73 percent viewed it as somewhat corrupt or corrupt.

The need to spend and costs

Our final experiments kept the source and amount of money constant, said nothing about the tone of ads, but informed subjects that ‘candidates needed to tell people what they stand for.’  Respondents were then randomly assigned information about how much TV and mail ads really cost.  Again, we see what might be a bias against TV ads that is linked to perceptions that campaign money is corrupt.  One experiment found respondents were more likely to agree that candidates needed to raise money when told about the cost of mailing, but not when told about (an equal) cost of TV ads. A second experiment prompting people about (equal) costs of mail versus TV demonstrated that information about the cost of mail reduced perceptions of corruption, but information about the cost of TV ads did not.

More research to be done

Surveys find overwhelming cynicism about campaign finance in the US, but we find these attitudes are not unmovable. People make distinctions about who the money is from, and how much is spent, and partisans tend to see their party’s sources of money as honest.  This suggests that a measure of reasoning that is not simply blind cynicism.