The Democratic and GOP conventions were an illustration of the “Two Americas” that John Edwards spoke of in 2004, writes Walter Dean Burnham. While the GOP’s convention had a hateful atmosphere, and displayed a party closing in on itself, the Democrats by contrast, focused on the ‘Politics of Joy’. Even if Hillary Clinton does take the White House, however, he warns that she could still be facing a GOP-held Senate and House next January, which would continue the political gridlock that President Obama has faced for the past two years.

The past two weeks have been punctuated by political speeches seemingly aimed at energising the bases of two parties who are about to engage in a pitched battle for the presidency. At another presidential convention almost exactly 12 years ago, on the eve of that year’s presidential fight, the Democratic vice-presidential nominee John Edwards made a similar appeal when he spoke of ‘Two Americas’:

And we have much work to do, because the truth is, we still live in a country where there are two different Americas: one, for all of those people who have lived the American dream and don’t have to worry, and another for most Americans, everybody else who struggle to make ends meet every single day. It doesn’t have to be that way.

This year, the convention halls in Cleveland and Philadelphia certainly showed the two Americas that the North Carolina Senator highlighted in 2004.

One America – the state of the GOP

In Cleveland, New York real-estate mogul Donald J. Trump easily won the Republican Party’s presidential nomination on the first ballot, against intense but (as throughout) ineffectual opposition from the wreckage of the Republican Party establishment. Trump has the most stark personality disorder in American political/presidential history. This is best described as an extreme narcissistic complex! (Not even Nixon comes close on any “psycho-biography” scale).

Of course, following the British historian Arnold J. Toynbee’s evaluation, it’s easy enough to observe that would-be saviours with time machines pointed to the past were as likely as not to display dramatic personalities; thus, for instance, the 13th century “Tribune of the Roman People” Cola di Rienzo. On the testimony of August Kubizek, Adolf Hitler’s one-time buddy in Vienna, performances of Richard Wagner’s opera Rienzi produced volcanic reactions in his chum. One suspects that this sort of thing goes with the territory…

The most remarkable feature of the 2016 Republican Convention was the hateful atmosphere in the hall at the Quicken Loans Arena. The GOP is a now party which is closed in on itself. It is hostile to “minorities,” science (e.g. the evidence for global warming), any known form of gun control, and eager to suppress the suffrage rights of the “wrong” kinds of would-be voters. All this, of course, to preserve the “purity of the ballot.” As recently as July 29th, federal courts threw out voter ID laws in North Carolina and Wisconsin, which had been recently, as always, enacted by Republican legislatures. The so-called “purity” dodge was rejected as the transparent sham it is: the central motive of these laws being clearly discriminatory. The courts declared them unconstitutional and void. Since Supreme Court Justice Antonin Scalia, J., has been dead since February 2016 and the Republican majority in the Senate has refused to act on a duly appointed successor (i.e. “advise and consent” as the Constitution mandates), if the voter ID cases get to the Supreme Court on a 4-4 basis, these lower-court rulings will stand, at least until, if and when Donald Trump appoints Scalia’s successor in January 2017!

The other America – the state of the Democrats

Perhaps there is no reason to dwell so much on the Democrats’ convention as there was with its Republican counterpart. The GOP assembly was shrouded in gloom: “The USA on the skids,” so to speak. One must go back to the Federalists in the country’s infancy to see some parallel.

As expected and planned for in the coronation that never happened, former Secretary of State Hillary Clinton was nominated as the first woman major-party candidate in U.S. history. But the coronation was derailed by the insurgent movement led by U.S. Senator Bernie Sanders (I-VT), who in the end won the primaries and caucuses of 27 states. Here, one of the singularities of this selection process was the extreme age polarization among the voters: at least a 2:1 margin for Sanders over Clinton among those aged 30 or younger.

Perhaps remarkably, the tone of this convention was the polar opposite of that of the GOP counterpart. For the Democrats, the theme was “The Politics of Joy.” Even on a visual basis, the Democratic Convention was liberally represented by major numbers of minorities, in contrast to the nearly lily-white profile of delegates in their GOP counterpart.

Another factor in this cycle was the manifest unpopularity of both party nominees – though, to be sure, Trump appears even more so than Clinton. So far as I can determine, this is unique in the entire history of American presidential politics. 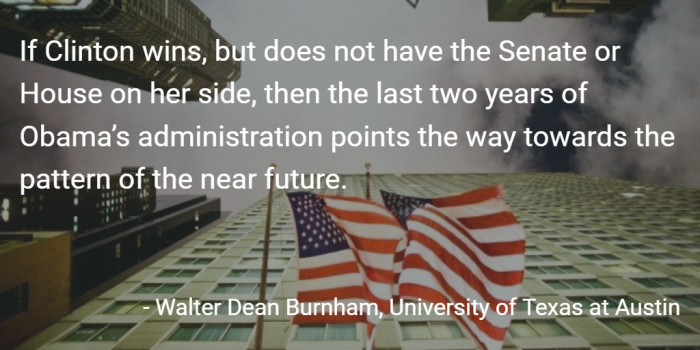 After the conventions: where to from here?

As of this writing, it is far from clear that the Democrats’ choice of so upbeat an image profile was altogether wise. There are manifestly many things seriously wrong with the American economy. Nor is the politics of extreme partisan gridlock likely to end unless one of the likely scenarios becomes fact on November 8th, 2016. This scenario, of course, involves R1-R2-R3:

If we face this scenario in January, then the US Ship of State lurches into uncharted (but politically hard-right) seas.

There is general consensus that Republican control of the US House will very probably endure whatever happens at any other level of election. For now, I concur. But if so (i.e. if the pattern is something like a Clinton presidency, with a tied Senate and a GOP House majority) then the perpetuation of structurally imposed and extremely polarized gridlock becomes a virtual certainty for at least the 2017 to 2019 House cycle.

In such a context, “President” Clinton can propose the reform-progressive of the party agenda again and again, and whatever she proposes, Republican control of other instances of government will act as a near “guarantee of inaction.” If Clinton wins, but does not have the Senate or House on her side, then the last two years of Obama’s administration points the way towards the pattern of the near future. This is elementary political arithmetic, American-style!