In order to tackle bullying 49 US states have put into place state-level anti-bullying policies. But what determines how comprehensive these anti-bullying laws are? In a close analysis of state anti-bullying laws, Dan Mallinson finds that states with larger populations of groups which are more vulnerable to bullying, such as LGBTQ, disabled, and minority students, as well as those with greater potential financial resources, were more likely to have more comprehensive anti-bullying legislation.

Bullying is a vexing social problem in the United States and abroad. It has well recognized psychological, social, physical, and emotional effects on not only those bullied, but also bullies themselves. These effects persist in the long-term. High profile cases of school violence tied to bullying, as well as suicides of bullied students, have motivated the spread of 120 state-level anti-bullying policies in 49 US states since 1999. Montana is the only state that has not adopted a statewide anti-bullying policy. There are, however, important gaps between the specific components of these policies and the comprehensive approaches advoctaed by researchers. In fact, some states have moved in the last few years to roll back anti-bullying protections for the purpose of protecting free religious speech, setting up a struggle between two sets of individual rights – a right to physical and psychological safety and a right to free expression. Thus, instead of the gap shrinking due to policy learning and sharing among the states, it may in fact widen in the coming years. What then is the specific gap between policy and science and why does it exist?

A 2011 report by the US Department of Education identified 16 components of anti-bullying legislation in the states. The components range from the seemingly simple (e.g., a distinct definition of bullying) to the more complex and expensive (e.g., providing mental health counseling services for bullies and victims). The vast majority of anti-bullying laws defines the purpose and scope of the law, as well as defines the behavior prohibited and consequences of that behavior. Only a minority of the states, however, identifies specific groups that are disproportionately targeted by bullying (e.g., LBGTQ students), requires provision of mental health services, and ensures legal remedies to victims. Figure 1 shows a map of the states and the measured comprehensiveness of their adopted anti-bullying measures. This measure of comprehensiveness is based on the 16 components from the Department of Education, updated since the 2011 report. Darker colors correspond with more comprehensive policies. It is evident from this figure that there is some regional clustering of comprehensiveness, suggesting some learning between states, but the clusters are small, often two or three states.

I used statistical analyses to test five potential explanations for inter-state variation in anti-bullying comprehensiveness: (1) state support for free speech; (2) lack of support for LGBTQ rights through other laws (i.e., the adoption of no-promo-homo laws); (3) responsiveness to vulnerable populations (LGBTQ, disabled, and minority students); (4) financial and legislative resources; and (5) policy learning. The most consistent results showed that states with larger populations of enumerated groups (LGBTQ, disabled, and minority students), as well as those with greater potential financial resources, tend to also have more comprehensive anti-bullying policies (see Figure 2 below). There is also an interesting and unexpected backlash effect appearing among neighboring states. The baseline assumption among scholars studying the spread of new policies is that neighboring states positively influence each other in adopting innovative policies. In the case of anti-bullying legislation, however, states with stronger policies tend to be surrounded by states with weaker policies. The statistical model did not test the temporal dynamic of who adopted first, so these results are tentative. It is possible that the surrounding states will converge towards stronger policies if their neighbors’ policies are successful. Figure 3, however, shows that as the states have adopted these policies over time, they have not systematically become more comprehensive. Meaning, there is little evidence of a positive learning effect.

Note: States that have updated their policies since their initial adoption are marked by red triangles.

On one hand, the results are encouraging in that states with larger populations of individuals disproportionately affected by bullying have taken stronger steps to address the problem. This suggests a positive story of legislative responsiveness. On the other hand, it is clear that these groups are not equally protected across the states. Furthermore, demographers suggest that the amount of variation in these groups, particularly LGBTQ and disabled, is smaller than what is captured by the US Census. Meaning, the Census can only capture self-identifying individuals and there are historic social stigmas associated with identifying as LGBTQ or disabled. Not to mention the issues with racial identification in the Census. What these results could really be capturing is the supportiveness of a state’s environment for identifying within one or more of these affected groups. School safety laws are likely one component in that supportive environment.

Thus, there is a lot more to unpack in terms of the factors causing variation in state approaches to the problem of bullying. Furthermore, these policies address bullying in a fairly narrow way in that they focus on the school environment and the responsibilities of teachers and administrators. There are substantial external factors, such as economic hardship, that encourage the expression of negative feelings through peer victimization. Thus, anti-bullying measures in schools need to be combined with other social supports that can help prevent bullying in the first place. Making school environments safe is not only a human rights issue, but also one of improving student achievement. Thus, states likely need not only comprehensive in-school approaches to curbing the problem, but also multifaceted policies that deal with issues external to the school environment. These results suggest that the adoption such approaches may be hampered by a lack of available resources in some states and, more importantly, the lack of a supportive environment for vulnerable populations.

This article is based on the paper, ‘Schoolyard Politics: Measuring and Explaining Variation in State Antibullying Policy Comprehensiveness’, in State and Local Government Review. 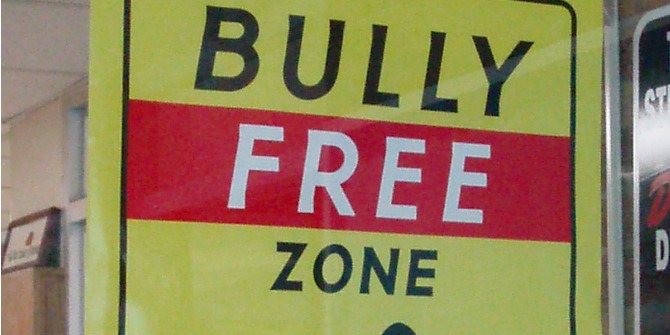