Since the Republican and Democratic conventions in July, Hillary Clinton has experienced a poll ‘bounce’, to lead Donald Trump by about 8 percent, especially in telephone polls with live interviewers. Internet polls, by contrast, tend to show Clinton leading by only 2 or 3 percent. Are these internet polls underestimating Clinton or overestimating Trump? Using results from the 2016 presidential primaries to assess state polls’ accuracy, Taylor Howell, Christopher Stout and Reuben Kline find that that internet polls were slightly more likely to overestimate support for Trump than live interviewer polls, and that they were likely to underestimate support for Clinton by nearly 2 percent. They suggest that online polls may still have some ways to come in terms of accuracy and may be skewing away from Clinton by offering a “don’t know” option to those who are as yet unwilling to commit to voting for her.

In the midst of the post-convention wave of growing support for Hillary Clinton, a few polls have shown a much closer race. For example, on August 7th, 2016 an ABC/Washington Post telephone poll which collected responses with live interviewers showed Clinton defeating Trump in a head to head matchup by 8 percent. On the same day, a USC/LA Times internet poll showed a race which was almost even. While variance in election predictions across polling firms is normal, the better performance of Trump in internet polls appears to be systematic in this election cycle.

In fact, our own analysis of the collection of 124 national polls from Real Clear Politics from May, 2015 to July, 2016 seem to corroborate this finding (Note: all polls in our analysis sample likely voters).  Namely, the average margin of victory for Clinton is about 4 percent lower for polls which are collected through the internet or through interactive voice response (IVR) (i.e. phone interviews that are conducted with an automated voice system) than those collected by a live interviewer. In live interviewer polls, Clinton is leading by 6.5 percent and in internet/IVR polls her average lead is only 2.4 percent. This raises the question: are internet/IVR polls overestimating support for Donald Trump or are internet polls underestimating the support of Hillary Clinton? 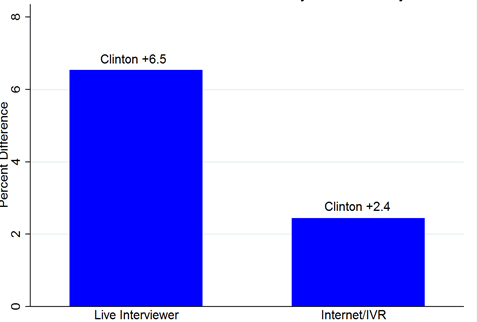 The vast majority of commentary  and analysis on this phenomenon has focused on whether private internet polls bolster Trump’s numbers  because many voters may be unwilling to publicly support him due to his controversial statements. Despite our prior research demonstrating that polls tend to significantly underestimate support for female candidates for statewide office, less attention has been paid to the possibility that internet polls are underestimating support for Hillary Clinton and this is driving  the smaller gap between Clinton and Trump in internet polls. Our own analysis of recent polls, (shown in Figure 2 below), seems to support this conclusion. Namely, in our analysis of national election polls collected from May 2015 to July 2016, we find strong evidence that internet/IVR polls underestimate Hillary Clinton’s support. On average, Hillary Clinton has about 5 percent less support on internet/IVR polls than she does in live interview polls. These lower levels of professed support for Hillary Clinton in internet/IVR polls relative to live interviewer polls are statistically significant. Conversely, Trump essentially does equally as well in internet/IVR polls as he does in live interviewer polls. As a result, Trump’s relative over performance in internet polls compared to live interviewer polls may have less to do with him and more to do with the underestimation of Clinton’s support in online polls. 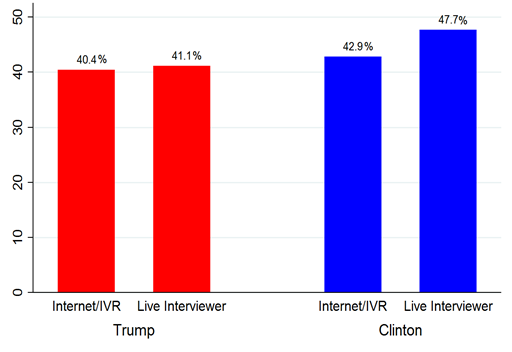 Given that the privacy of internet/IVR polls best mirrors the secrecy of the polling booth, should Trump be optimistic that Clinton performs worse in internet polls? Or should Clinton find comfort in the fact that internet/IVR polls have traditionally been less accurate? While we will have to wait until the final election outcome to definitively know which collection method is more accurate, we can gain some insight into these questions by exploring the polling performance of live interviewer and internet/IVR polls during the 2016 presidential primaries. To assess polling accuracy by the method of collection, we collected all publicly available state polls that were done within two weeks of each state’s primary/caucus. We then estimated the average level of polling accuracy by taking the margin of victory in the election and subtracting it from the average margin of victory in the poll.  In essence, our measure of polling accuracy provides the number of percentage points that polls over- or underestimates support for specific candidates. To make comparisons between Clinton’s and Trump’s polling performance, we compare their polled and election support to their nearest competitor in their party’s primary. Hillary Clinton is compared to Bernie Sanders and Donald Trump to Ted Cruz. 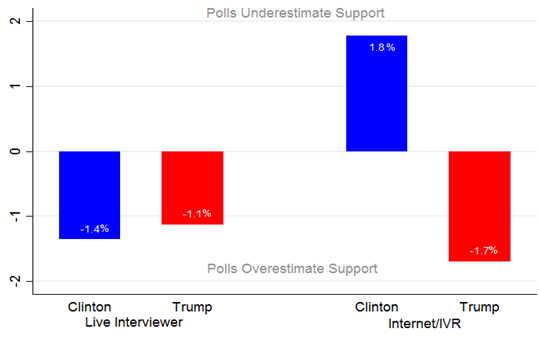 Why Do Internet Polls Underestimate Support for Clinton?

The results of our analysis indicate that Trump’s relatively better performance on internet polls is better explained by Hillary Clinton’s underestimated support than by the public shame his supporters may feel in live interviews. Why we see these results isn’t exactly clear. One likely cause for the online-polls favoring Trump relative to Clinton is that online survey firms are still going through growing pains with how to accurately sample their polls in an unbiased manner. Online polls tend to skew towards younger and more radical demographics as both groups tend to have a disproportionately large online presence. Some online polling firms are better at correcting for these biases than others, but many are plagued by these skewed demographics that would tend to favor Trump in the general election and Sanders in the primary.

It may also be, that greater access to the “don’t know” option on internet polls is more attractive to those who lean toward Clinton, but do not want to fully commit yet. If this is true, Clinton would receive lower levels of support in internet polls, but these leaners would ultimately support her candidacy in the polling booth.  Finally, it is also possible that social desirability for female candidates may be leading more to individuals which lean toward Clinton on the phone to state their preference for her to appear as more progressive on gender issues. While only time will tell which polls worked best in this unorthodox election cycle, Clinton’s lower levels of support in internet polls does not necessarily approximate the real state of the race.