Are Donald Trump’s supporters authoritarian, anti-establishment, or both? In new research into who supports The Donald, Bert Bakker, Matthijs Rooduijn and Gijs Schumacher find that Trump’s supporters are those who score low on the personality trait of agreeableness (they are more likely to support politicians who criticize the establishment), and those who are more authoritarian (they are more likely to vote for politicians who push for more restrictive immigration policies). They also find that Trump’s authoritarian supporters are likely to support other Republicans who are restrictive on the issue of immigration, such as House Speaker Paul Ryan, while the low agreeable are dismissive of such establishment figures.

Several blogs have characterized Trumpistas as either authoritarian or anti-establishment. Looking at the evidence, we believe that both of these characterizations explain support for Donald Trump. In fact, we believe it to be unlikely that a candidate can win a primary emphasizing only one issue or addressing one particular personality type; Trump’s support stems from two groups with different psychological traits, who look for different things in a candidate. One group consists of Authoritarians, who have a preference for social order and hierarchy and who are particularly triggered by fears of, for instance, immigrants. The other group consists of individuals who score low on the personality trait of Agreeableness. They are generally egoistic, distrustful and uncooperative and hold fierce anti-establishment attitudes. The more Trump spits on the establishment, the more he motivates these people.

When categorizing politicians like Donald Trump, Paul Ryan and Bernie Sanders, it is of essential importance to make a distinction between politicians who express an anti-establishment message and politicians who express an anti-immigration message. Sometimes these two messages go hand in hand. This is the case with Trump, who fiercely criticizes the Washington elite, and at the same time aggressively insults immigrants. Yet these two messages need not be related. Sanders, for instance, expresses an anti-establishment message which is not anti-immigrant, whereas Paul Ryan holds restrictive ideas about immigration, but is not anti-establishment (he was after all, the running mate of Mitt Romney during the 2012 presidential elections and is the current Speaker of the House of Representatives).

Based on our earlier work (ungated), we expect that voters who score low on Agreeableness are likely to vote for an anti-establishment politician. This means that when it comes to this trait, supporters of Trump (who is anti-establishment) will differ from supporters of Ryan (who is not). On the other hand, we expect that Authoritarians are likely to vote for politicians who are restrictive on immigration. This means that in this respect Trump and Ryan supporters will not differ from each other. Both are, after all, restrictive toward immigrants. Authoritarian citizens will differ, however, from those who support Clinton and Obama and are generally pro-immigration.

Agreeableness, Authoritarianism and Support for Trump

To see if this is the case, we looked at the associations between Agreeableness and Authoritarianism on the one hand, and support for Trump on the other hand. We report data that were collected between July 4 and July 6 2016 via Survey Sampling International in the United States among 882 Americans. We measured the self-reported favorability of Trump, Paul Ryan, Hillary Clinton as well as President Obama on scales ranging from “very unfavorable” (1) to “very favorable” (5). Figure 1 (left-hand panel) projects the predicted support for all four politicians, whereby a positive number indicates a positive association between the personality trait and support for the politician. In our models we control for sex, age, education, income and race.  As expected, Agreeableness is negatively associated with support for Trump, but unrelated to support for Ryan, Obama and Clinton. We also find in the bottom panel of Figure 1 that Authoritarianism is positively associated with support for both Trump and Ryan, but negatively associated with support for Obama (and unrelated to support for Clinton). This evidence confirms that Agreeableness but not Authoritarianism distinguishes support for Trump from support for other Republicans who are restrictive on the issue of immigration.

Figure 1 – Agreeableness and Authoritarianism as correlates of support for Trump, Ryan, Clinton and Obama 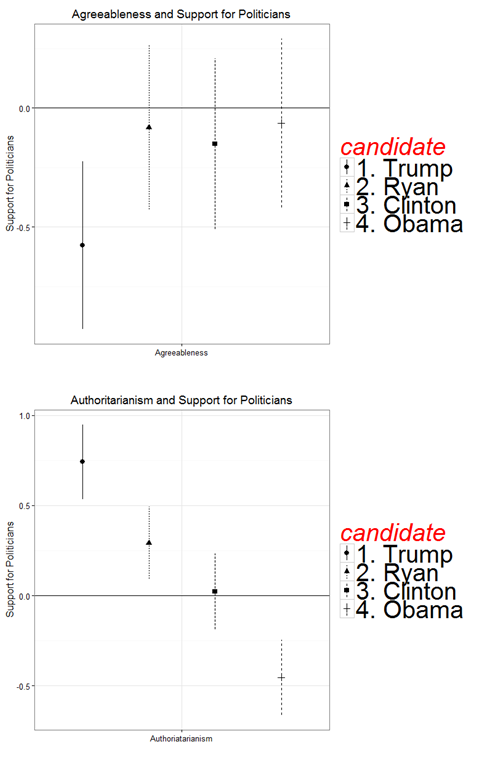 In the same survey we conducted an experiment to further assess whether Agreeableness and Authoritarianism affect support for (fictional) politicians expressing an anti-establishment or anti-immigration message. Participants were asked to make a decision in a fictional election for the House of Representatives for candidate A or B. Candidates could express an anti-establishment message (“The House of Representatives is mostly full of Washington insiders who only care about themselves”) or a pro-establishment message (“The House of Representatives is mostly full of honest and hard-working people who care for ordinary Americans”). We also varied the standpoints of the fictional candidates towards immigration. On the one hand a candidate could be pro-immigration with claims like “immigrants from countries that are torn apart by war or natural disaster should be welcomed in America” or “immigration is good for our economy; immigrants can take-up vacant jobs and bolster economic growth”. On the other hand the candidate could be anti-immigration, making statements like “immigrants steal jobs from ordinary Americans; we should stop immigration!” and “America is for Americans, therefore we should stop immigration!”. 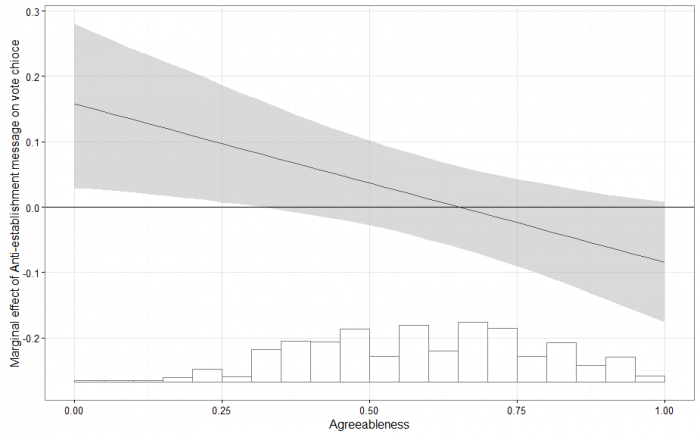 We do find an association, however, between Authoritarianism and the likelihood of voting for a candidate who expresses an anti-immigration message. Figure 3 projects the effect of the message that immigrants steal jobs from Americans over the range of Authoritarianism. The graph shows that a candidate who expresses such a message receives more votes than a candidate expressing the message that the US should take care of refugees – but only among strongly authoritarian citizens. 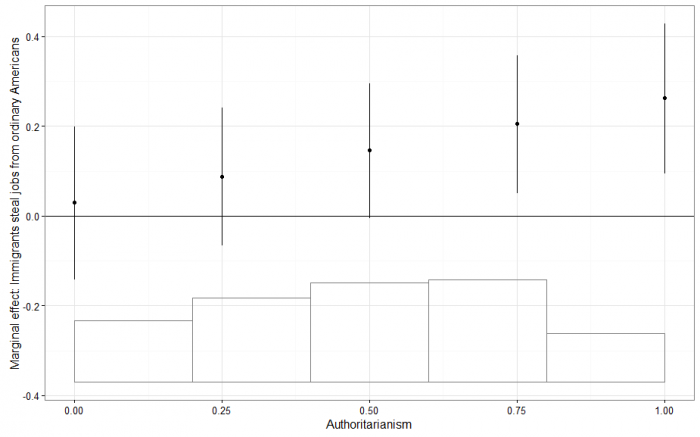