How the use of language shapes which Islamic groups Westerners support

How the use of language shapes which Islamic groups Westerners support

The US faces a complicated foreign policy environment in the Middle East, with a number of Muslim groups and actors involved, some seeing US support, some working in opposition. In new research, Mujtaba Isani and Daniel Silverman examine how Islamic cues influence the opinion of those in the West towards such groups. They find that such cues – for example, Shari’a law being a policy goal – do matter, and that the degree to which is heavily influenced by citizens’ partisanship.

In recent years, the United States and its “Western” allies have been confronted with an endless stream of foreign policy choices towards the Islamic world. Since 2011, the US has had to decide whether to embrace elected Islamic parties in Egypt and Tunisia, support Islamic rebels in Libya and Syria, and negotiate with Iran about its nuclear program, in addition to managing two wars and three drone campaigns in Muslim majority countries. While foreign policy choices like these are shaped by many factors, one key input is public opinion. So how does the perceived Islamic character of these actors shape foreign policy opinion towards them?

Unfortunately, our existing understanding of these dynamics is limited. Research shows that religious differences are an important ingredient in foreign policy attitudes – in two recent survey experiments (here and here), Western publics were more willing to start a war against “Muslim” than “Christian” adversaries. Yet this presents a simplistic view of how religious disparities impact foreign policy opinion. Consider the key participants in the Syrian civil war, for instance – ISIS, the Al-Nusra front, the “moderate” Free Syrian Army, the Kurdish rebel groups, Hezbollah, and the Assad regime, among many others. While all are broadly “Muslim,” their Islamic character is portrayed by themselves – and by Western media – quite differently. Do these differences shape foreign policy attitudes? When are Western publics really fearful and mistrustful of Muslim actors?

We examined these issues in an experiment conducted in May 2015 on Amazon’s Mechanical Turk (MTurk) platform. In the experiment, we gave Americans different news stories about the Syrian conflict in which we randomly changed aspects of a realistic, but fictitious, rebel group – the Free Syria Movement (FSM) – that was seeking US support. Specifically, we examined whether giving the actor common Islamic language (“Allah willing…Allahu akbar”), policy goals (“Shari’a law”), and/or labels (“Islamist”) significantly impacted citizens’ feelings, attitudes, and ultimately policy preferences towards it. Here is what we learned:

Under normal circumstances, we found that respondents’ attitudes towards the FSM were relatively benign. Although they knew the group was Muslim, they tended to give neutral or mixed responses about its level of trustworthiness, compatibility with American values and interests, emotional impact on them, and likely role as an American ally or adversary in the region. Likewise, they had mixed views about sending it the requested American military aid (although they leaned slightly against overall).

In contrast, with the three Islamic cues incorporated into the vignette, these responses all shifted in a sharply negative direction. Citizens tended to see the group as untrustworthy, incompatible with their values and interests, a source of fear, and a potential regional adversary. Their willingness to provide aid moved firmly towards opposition, dropping on average by over 7 percentage points. And other attitudes took even larger hits, with average trust in the group dropping by 10 percentage points and average affect towards it plummeting by 12. In sum, respondents did not have particularly hostile attitudes towards the Islamic actor to begin with, but only when they were “cued” to do so.

2) But some cues matter more than others.

Yet we also found that some of the Islamic cues harmed attitudes towards the group far more than others. In particular, insertion of “Shari’a law” as a policy goal had the most harmful impact, while use of the “Islamist” label did the least damage of the three cues. This is not wholly surprising – although goals like Shari’a law can have many different meanings in the Muslim world, from inclusive welfare states to punitive morality codes, they have been caricatured solely in terms of violence and oppression by Western elites. As stated by Newt Gingrich, Shari’a is “a mortal threat to the survival of freedom in the United States and in the rest of the world as we know it.” In fact, anti-Shari’a legislation had been proposed in 23 American states by 2011. Nor is such “Shari’a-phobia” unique: other broad Islamic political goals such as the pursuit of a Caliphate have been received with similar apprehension in the West.

3) Their influence depends on partisanship.

Finally, we found that the effect of these cues depends on citizens’ party identification. As shown in Figure 1, with all three cues activated, for example, we see a 22 percentage point drop in trust in the group among Republicans, a 10 percentage point drop among independents, and a 5 percentage point drop among Democrats. This also is not wholly unexpected. Republican political elites often describe security threats in more explicitly Islamic terms, with a greater willingness to label terrorist groups as “Islamic” and invoke concepts like Shari’a and the Caliphate to characterize their goals. Accordingly, we interpret this mostly as Republican identifiers taking cues from their elites. Yet, as is clear, independents and Democrats are not immune from these reactions either.

Figure 1 – The Effects of All Three Islamic Cues on Attitudes Towards the FSM, by Party Identification 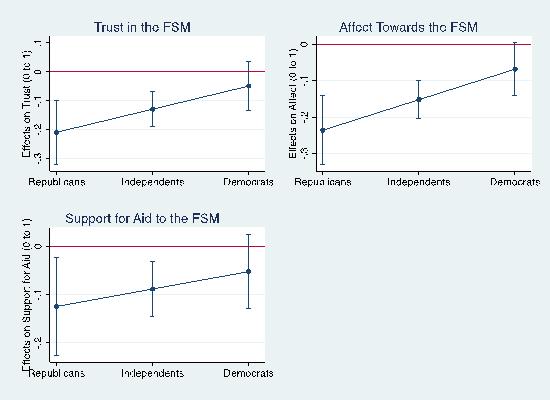 In sum, Western anxiety towards Muslim political actors is not just automatic. Rather, it is stoked by the rhetorical choices of Western elites (who politicize Islamic terms and ideas) and of the Islamic actors themselves (who use them ignorant or indifferent to this politicization). Contested Arabic-language terms like Shari’a, Khilafah (Caliphate), and jihad may make the easiest targets. The key point is not that these words do – or don’t – mean what Western audiences often assume they do, but rather that they can mean many different things in the Islamic world and thus serve as poor guides to a group’s intentions or likely behaviors.

So, what is to be done? Ultimately, fear-mongering elites will still use this language – but other actors can become more informed about it. First, ordinary citizens may benefit from a clearer picture of how their attitudes can be manipulated by these cues, and may wish to educate and inoculate themselves. Second, the media may benefit from a clearer portrait of how its context-free use of Islamic “buzzwords” contributes to the process – offering some explanation instead of simply regurgitation of terms like Shari’a could help provide essential context for readers. And finally, and perhaps most fundamentally, Islamic actors seeking Western assistance – whether rebel factions in Syria or political parties in Tunisia – may benefit from a clearer view of how their rhetorical choices resonate overseas and can poison local perceptions and obstruct their objectives. Ultimately, they would be wise to use politicized Islamic cues like Shari’a with great care.

A version of this article originally appeared at the Washington Post’s Monkey Cage blog, and is based on the paper, ‘Foreign Policy Attitudes toward Islamic Actors’, in Political Research Quarterly.