In Fed meetings, decision making is free – but not equal.

In Fed meetings, decision making is free – but not equal.

With its ability to influence interest rates globally, the Federal Open Market Committee (FOMC) of the US Federal Reserve is arguably one of the most important decision making bodies on the planet. But how does it come to its decisions? In new research which analyses transcripts of FOMC deliberations over nearly 30 years, Joseph Gardner and John T. Woolley find that women speak less than men for nearly their entire tenure on the FOMC. While women are free to speak, they write, they do not participate equally in FOMC deliberations, and this could be influencing policy choices.

In the wake of the Great Recession, the Federal Reserve gained new prominence as it kept interest rates low in an effort to prop up an ailing economy. Changes to the Fed’s interest rate are decided by the Federal Open Market Committee (FOMC), which is made up of Fed Board Governors and Reserve Bank Presidents. But how does the FOMC deliberate its decisions, and who has the biggest influence on how they are made?

In new research we assessed FOMC deliberations using two widely mentioned “conditions” for good deliberation—that people can both freely and equally participate in deliberation.  By our measures FOMC decision making is quite free in that people express disagreement, question others, and suggest issues that should be addressed.  In contrast, FOMC participation is not equal.  Some aspects of FOMC inequality probably make sense.  For example, more experienced members talk more.  But other aspects of inequality are indefensible.

In particular, we found that female members of the FOMC participate markedly less in that body’s policymaking meetings.  This certainly raises normative concerns—what would justify such a pattern?  It matters for consequential reasons as well:  Unequal participation may undermine the quality of the Fed’s deliberations.  In addition, a range of research suggests that women differ from men in their policy preferences.  If policy choices differ across gender, and if there are gender-based inequalities in participation, then resulting policy choices might reflect this fact.

We think the FOMC should make its decisions in a deliberative fashion.  By this we mean via a reason-based process involving offering justifications for preferences and evaluating arguments.  However, such deliberation may be undermined by unequal participation.  Inequalities in participation may limit the free expression of a broader range of information, perspectives, and arguments.  Such contributions are partly what makes group deliberation a better way of making decisions and could also reduce the likelihood of groupthink.  In a related way, with each FOMC District Bank president representing a different geographic district, unequal participation could lead to the under-representation of some regions’ interests.

Experimental research suggests that unequal participation in general, and less participation by women in particular, leads to poorer performance on collective decision making tasks such as puzzle solving and negotiating over limited resources.  Gender inequality may matter for other reasons.  Women differ from men across a wide range of issue areas, including with respect to ideology, preferences over social welfare and economic policies, and support for redistributive policies.  These differences characterize elites as well as citizens generally.

A variety of studies have identified gender-based differences in decision making among business executives.  For example, firms with more women in management produce higher rates of return and issue less debt.  More relevant to the situation on the FOMC are studies showing gender differences in decision making among bankers.  Of particular interest is research on the recent financial crisis showing that female bank CEO’s were more risk averse than males when it came to setting capital holdings.

There is indirect evidence for a pattern of gender-based policy differences on the FOMC.  Data prepared by the Federal Reserve Bank of St. Louis show that between 1978-2007, when female members of the FOMC dissented, they always did so in favor “ease,” that is, favoring a policy more likely to stimulate economic growth rather than control inflation.  (However, in the September 21 meeting of this year, two female members dissented in favor of tightening.) This observation about the policy preferences of female FOMC members suggests that inequality, along with the small number of female members (only nine served on the FOMC between 1978-2007), may have reduced the expression of support for more stimulative monetary policy.

A consistent comment of FOMC observers is that its members are not equal.  It is commonplace to observe that the Chair is more than first among equals.  Top staff also have tremendous influence.  Are such views correct?  To answer this, we examined patterns of participation in FOMC meetings.  The FOMC meets every six to eight weeks to set policy concerning interest rates and other policy instruments.  Each meetings’ transcripts are released after a five-year delay.  This delay balances transparency against the need for secrecy.  In our study we analyze the verbatim transcript of every regular meeting from 1978-2007.

We calculated participation rates for each FOMC member, 18 persons per meeting assuming no vacancies or absences.  Our measure of participation is the number of meeting sentences spoken by these participants in each separate meeting they attended.  The quantity of talk contributed by each member, controlling for overall meeting length, is our indicator of equality in deliberation.  We readily acknowledge that people who talk the most are not always more influential, but they are availing themselves more thoroughly of the opportunity to influence others and at the least they will tend to shape the tone of discussions.

What did we find?  Controlling for a variety of factors, our modeling shows that gender is significantly related to participation rates.  In fact, we found gender to be one of the stronger drivers of unequal participation in FOMC meetings.

This is easily seen in the time path of men’s versus women’s participation.  The inequality gap is greatest at the outset of a woman’s term on the FOMC, as shown in Figure 1.  Our estimates show that with time this difference diminishes and is eliminated after four years (or about 32 meetings).  However, four years was just about the average total term of service for women during most of this period. This effectively means that during our study period, women spoke less than men for nearly their entire tenure, leaving them with many fewer opportunities to influence the body’s deliberations.

Figure 1 – Estimated Effect of Time Served as a Member on the Number of Sentences Spoken in FOMC Meetings, Men and Women, 1978-2007 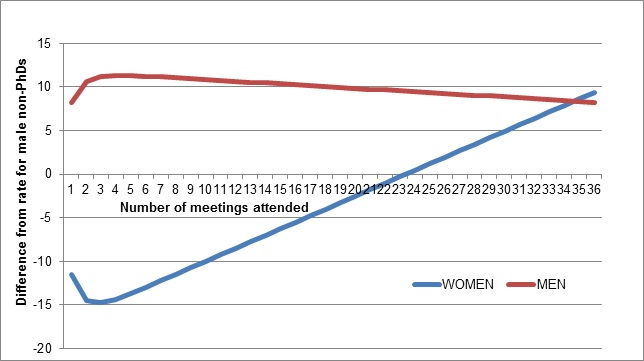 Notes:  In this simulation, we make the following assumptions about the typical male and female FOMC member:  both have PhD’s; neither hold positions as either district bank presidents or the vice-chair of the Federal Reserve Board; neither are former top FOMC staff members; and neither are voting to dissent.  Source:  Verbatim transcripts of FOMC meetings, 1978-2007.

Our research shows that the FOMC deviates from strict participatory equality.  Does this matter?  It does not seem to flow from any established practice of explicit discrimination.  In fact, Committee norms (and practice) seem to require minimal participation by all members, a feature not found in many deliberative bodies.  But a robust body of work suggests lower participation rates by women could be hurting the quality of the FOMC deliberation and it could be influencing policy choices.

What can be done?  One straightforward possibility is suggested by Karpowitz and Mendelberg, who show that women’s participation rates improve when the number of women in a group is increased.  Given the stark underrepresentation of women on the FOMC, that is not an unreasonable prescription.  It is also possible that gender inequality may decline under the leadership of Janet Yellen, the first woman to lead the Fed.  It will be some years, however, before that proposition can be evaluated.

This article is based on the paper, ‘Measuring Deliberative Conditions An Analysis of Participant Freedom and Equality in Federal Open Market Committee Deliberation’ in Political Research Quarterly.

Joe Gardner – Gonzaga University
Joe Gardner is an Assistant Professor of Political Science at Gonzaga University.  His current research is focused on deliberative modes of decision making.  Along with John Woolley he has published several articles on the Federal Open Market Committee’s decision making, including a recent article assessing the effect of transparency on reasoned deliberation.

John T. Woolley – University of California-Santa Barbara
John T. Woolley is Professor of Political Science at the University of California-Santa Barbara and co-director of a large web archive, the American Presidency Project (www.presidency.ucsb.edu).  His work on the Federal Reserve and financial regulation extends from his 1984 book Monetary Politics (Cambridge) to a recent article on the Dodd-Frank reforms published in Politics and Society.  Current projects involve analysis of presidential documents and the transcripts of the Federal Open Market Committee.