For more than two decades, transcripts of the US Federal Reserve’s Open Market Committee meetings have been made available to the public. But has the move to greater transparency about monetary policymaking hurt committee deliberations? In new research which examines committee meeting transcripts from 1978 to 2007, Joseph Gardner and John T. Woolley find that leadership – not transparency – had the greatest effect on how members deliberated during meetings.

One hallmark of the 1990s “quiet revolution” in central banking was the movement towards greater transparency.  This movement was often rapid and was a remarkable departure from the long-dominant practice of conducting central banking in secret.  One example of transparency that provides an exceptional window on the conduct of central banking is the release of verbatim meeting transcripts.  The first major central bank to adopt this practice, in 1993, was the US Federal Reserve’s Federal Open Market Committee (FOMC).  The Bank of England (BoE) announced in late 2014 it too would begin releasing meeting transcripts of its Monetary Policy Committee.

The Fed’s decision to release transcripts was made under pressure from Congress.  At the time, many central bankers argued that this would hurt its deliberations.  Were they correct?  Does transparency of this sort harm committee decision making?  What might the BoE learn from the Fed’s experience with this practice?  Our recent research on the FOMC indicates that while releasing meeting transcripts probably altered some of the ways members talked with each other, it had no lasting negative effect on how much FOMC members actually deliberated during meetings.

The merits of transparency have been much debated.  In a report prepared for the BoE, Keven Warsh summarized those debates and concluded that transparency was “an essential best practice for central banks.”  Former FOMC Vice Chair Alan Blinder argues not only that transparency improves democratic accountability, it can also make monetary policy more effective:  it can make it easier for markets to understand and respond to central bank policy.

Transparency can, of course, take many forms.  For example, it could involve promptly and clearly explaining policy decisions, publicizing inflation targets, releasing transcripts, or, at its most extreme, opening meetings to the public or the media.    Most advocates of transparency would caution that effective monetary policy also depends on effective central bank independence from partisan political pressures.  When it comes to releasing meeting transcripts, some central bankers are skeptical that its benefits outweigh its costs.

Former FOMC Chairman Alan Greenspan is among those who opposed even the delayed release of transcripts.  In 1993 congressional testimony he spoke against the proposed release of FOMC meeting transcripts saying it would be a “major mistake” that would weaken the Fed’s defenses against political pressures.  In his view, releasing meeting transcripts “would so seriously constrain the process of formulating policy as to render those meetings nearly unproductive.  The candid airing of views, the forthright give and take, and the tentative posing of new ideas would likely disappear.”  His concern, in short, was that the meetings would become less deliberative.

The FOMC arrived at a compromise position of imposing a five year delay before releasing meeting transcripts.  Even so, some research has supported Greenspan’s concerns.  Contrasting three-year periods immediately before and after the FOMC began releasing transcripts, Meade and Stasavage found that the probability of members expressing disagreement with the Chairman decreased in the sunshine period.  By inference, releasing transcripts made members more cautious in what they said, fearing reputational damage if it became known they challenged Greenspan, who had a reputation for wisdom and keen insights.

In our view, the Meade and Stasavage findings do not settle the matter.  Disagreement with Greenspan was already low, and the reduction in disagreement was small.  The time period of their study was limited and member turnover added moderates to the committee.  The Chair himself might have actively sought more agreement.

Using every FOMC meeting transcript from 1978-2007, we studied how members discussed monetary policy in each meeting.    We focused directly on the issue of deliberation—reasoning on the merits of a policy.

Deliberation centrally involves reason-based argumentation.  It is a way of making decisions in which persons justify their own arguments and evaluate those of others.  It is a dialog that begins with someone making an argument for or against a proposal.  This could involve offering a justification for a policy position by providing information or evidence, or reasons for a particular interpretation of evidence.  Or it might involve the assertion or assessment of causal linkages.  Other participants then evaluate the justifications offered by the first person and may in turn offer alternative arguments or justifications.

We measured such deliberation by creating and testing a “dictionary” of words and phrases uniquely associated with the process of reasoning (while our dictionary is large, we do not claim that it is exhaustive).  We then used text analysis to count the frequency of these terms and phrases in the transcripts.  The unit of analysis is a transcript sentence; the automated search provides a count of sentences containing one or more target terms.  We then calculate on a per-meeting basis the relative frequency of sentences containing the targets.

Between 1978 and 2007 an average of about 16 percent of transcript sentences include terms or phrases we identify as indicating deliberative reasoning.  For the sunshine period (after 1993), the percentage was 18.6 percent and the pre-sunshine percentage was 14.3 percent.  This difference is statistically significant and suggests that sunshine strongly increased deliberation.

However, before accepting that conclusion, consider Figure 1, graphing our measure of deliberative reasoning.  While there clearly is more deliberation in the sunshine period, it is also clear that a shift toward using more reasoning terms long predated the release of the transcripts.  In fact, the move almost precisely coincided with Greenspan’s appointment as FOMC Chair in August 1987.  Leadership has often been identified as a key factor in FOMC behavior, and the Chair’s role needs to be accounted for in any model of its deliberation. 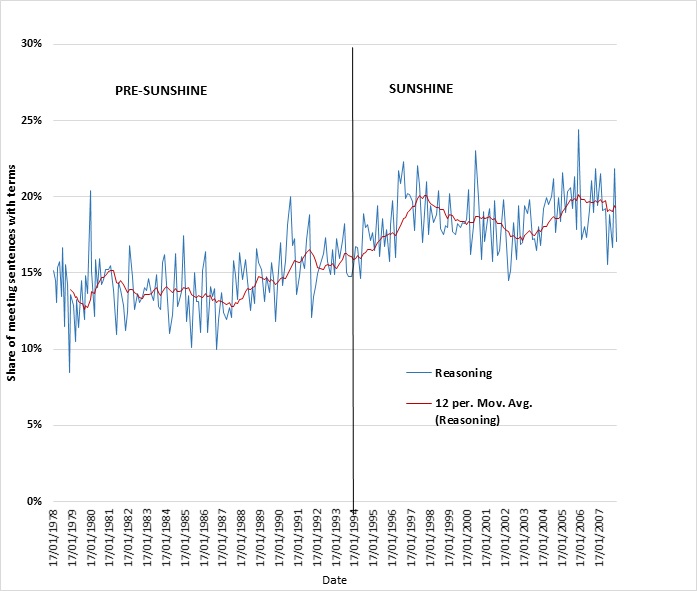 Note: “Reasoning” is the ratio of sentences containing one or more reasoning terms to all sentences spoken in each FOMC meeting. Blue line: ratio per regular meeting; Red line: Twelve meeting moving average of reasoning terms; “Sunshine break” is indicated by vertical line.

Figure 1 notwithstanding, it remains possible that sunshine could have had an independent negative effect on deliberation.  To assess this, we developed a regression model of deliberative reasoning.  This model allowed us to control for the effects of leadership, economic conditions, and whether meetings involved any dissenting votes or a change in the Fed funds rate.  It also allowed us to control for a variety of other factors including how long members had been serving, how much disagreement was expressed in a meeting, whether the Federal funds rate was changed, whether any member dissented, and how equal participation was.

Leadership effects – especially the Chairmanships of both Paul Volcker and Greenspan – significantly affected deliberation.  The results of our modelling show that, controlling for these other factors, the release of FOMC meeting transcripts had no significant effect on how much members deliberated during meetings.

Sunshine did have some effect.  We could demonstrate a significant immediate effect of sunshine on use of informal language (i.e., words containing contractions) inside the FOMC.  But that effect was largely transitory.  Members were no less likely to address each other by name, nor was there a change in the frequency of speaker changes—both possible indicators of the “back and forth” some take to indicate deliberation.

Our research shows that releasing the FOMC’s meeting transcripts with a five year delay did not hurt its deliberations.  That delay in this case seems to be sufficient to protect its independence while allowing for broad, though somewhat dated, assessment of the Fed’s work.  The BoE chose to impose an eight year hold before releasing each meeting transcript.  Our evidence suggests this is more than enough to insulate its deliberations.

Joe Gardner – Gonzaga University
Joe Gardner is an Assistant Professor of Political Science at Gonzaga University.  His current research is focused on deliberative modes of decision making.  Along with John Woolley he has published several articles on the Federal Open Market Committee’s decision making, including a recent article assessing the effect of transparency on reasoned deliberation.

John T. Woolley – University of California-Santa Barbara
John T. Woolley is Professor of Political Science at the University of California-Santa Barbara and co-director of a large web archive, the American Presidency Project (www.presidency.ucsb.edu).  His work on the Federal Reserve and financial regulation extends from his 1984 book Monetary Politics (Cambridge) to a recent article on the Dodd-Frank reforms published in Politics and Society.  Current projects involve analysis of presidential documents and the transcripts of the Federal Open Market Committee.