As we reach the close of the 2016 presidential campaign, Walter Dean Burnham writes that the unstable dynamics of the election have their roots in a crisis of legitimacy for American politics as a whole. With his calls to return to a more idealized past of American greatness, Donald Trump has set himself up as a “savior with a time machine”. Trump’s appeal to less-educated working class voters has also been further enhanced by the anarchic (or even fascistic) rhetoric of Breitbart’s Steve Bannon.

Donald Trump has said that he loves ill-educated people. And well he might, since they form part of the bedrock of the coalition that gave him the Republican presidential coalition. At this moment, two sayings make a relevant political point: (1) There is nothing more dangerous than ignorance in action; (2) From one of my few heroes, Supreme Court Oliver Wendell Holmes, Jr. (1841-1935): “When the ignorant are taught to doubt, they do not know what safely they may believe.”

The often perverse dynamics of this weird election have their origin as a byproduct of the general legitimacy crisis of the entire American regime order. There has always lurked – usually well concealed behind the façade of normality – an embedded instability in American politics. This might be thought of as a potential for large-scale “jumping overboard” toward right-wing extremist political movements. The reasons for this vulnerability were clearly spelled out by myself in a journal article of 1972, “Political Immunization and Political Confessionalism; the United States and Weimar Germany.”

Earlier in this series of essays, I drew attention to the concept of “Saviors with a time machine,” developed by Arnold J. Toynbee in his monumental work, A Study of History. Some of these “saviors” looked to the restoration of an idealized past (archaism). Others, toward a revolutionary break, or “jump” into an imagined future state of affairs (“futurism”) (consider Mussolini’s invocation of the glories of imperial Rome as an example of the former, or Lenin’s [and Stalin’s] Bolshevism as an example of the latter).

In the much messier instance of the 2016 election in the USA, we have two cases (or symptoms) of systemic disintegration: Donald Trump’s successful capture of the Republican nomination and Senator Bernie Sanders’ (I-VT) failed but very powerful effort on the Democratic side. The residual benefactor of these convulsions is, it seems, Hillary Clinton, the defender of as much of the status quo as may be salvaged from the wreckage. For, as Toynbee is at great lengths to point out, the emergence of “saviors with time machines” to the center stage of politics is – perhaps above all – a mighty symptom of the disintegration of a previously hegemonic structure of culture, politics and governance. In the US’ case, signs of impending/developing crisis began with the financial meltdown of 2008, leading to interventions by state actors to prevent an outright depression, and with the elevation of the first African-American president in US history; and to the electoral upheaval of 2010 and beyond.

On the “archaist” side then emerges Donald J. Trump, who began his political career almost at once, by a years’-long insistence that President Barack Obama was literally an “alien-other,” an African from Kenya, and hence illegitimate, a usurper in the presidential chair. His campaign, from its beginning in June 2015, has been squarely focused on the less-educated lower-middle/white working class, major victims of policies pursued by established elites of both parties. 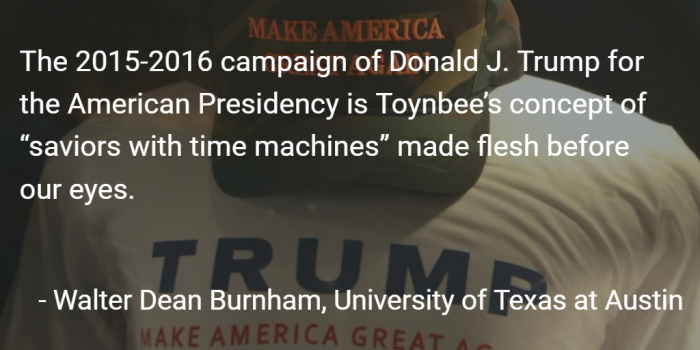 To these features of Trump’s campaign are added his elevation of Steve Bannon, creator of the Breitbart Media outlet, and a leading figure of the ”alt-right.” This man and his associates were generally little-known among larger publics, even attentive ones. Are they anarchists, fascists, or some of both? Be that as it may, it’s an old but true saying that a man is known by the company he keeps.

“Saviors with time machines” are noteworthy for charismatic personalities, exceptional rhetorical ability, and capacity to evoke cult-like followings. Those “saviors” oriented to the past’s “ideal state” – in Trump’s case, about 1954 – exist because the persistent and socioeconomic revolution imposed by capitalism’s ferocious dynamics produce more or less vast strata of victims over time.

The conclusion to my 1972 essay is as relevant now as it was then. Tendentious as it obviously is, Marx’s & Engel’s Communist Manifesto of 1848 is the first publication to provide a modern political-sociology perspective on this scene:

“The lower middle class, the small manufacturer, the shopkeeper, the artisan, the peasant – all these fight against the bourgeoisie, to save from extinction their existence as fractions of the middle class. They are therefore not revolutionary but conservative. Nay, more, they are reactionary, for they try to roll back the wheel of history.”

In more neutral language, it can be said of such strata that they are less actors than acted upon by social transformations which threaten without enlightening them; that they are dependent, vulnerable and politically reactive under stress. Lacking a pre-existing political church which explains their plight to them, their instinctive response to dangerously stressful social change is to support those candidates and movements who can most effectively promise them that such change will be stopped.

… The fascist movement corresponds to the political church which emerges to embrace these strata as a refuge. The key activating element appears to be multidimensional stress closely associated with a loss of consensus concerning the legitimacy of existing political structures and their elites.

The 2015-2016 campaign of Donald J. Trump for the American Presidency is Toynbee’s concept of “saviors with time machines” made flesh before our eyes. My 1972 analysis of vulnerabilities in American politics has now become actuel, to use the French term. But, ladies and gentlemen, this it is, as this writer sees it.