Tonight, the Chicago Cubs face the Cleveland Indians at the latter’s home ground in Ohio. Taking into account studies which suggest that sports victories can help incumbent candidates to win re-election, Sam Power writes that the outcome of the game could help tilt which way the Buckeye State votes – and therefore the entire presidential election.

As the clock strikes midnight tonight in Ohio, history will have been made. The Chicago Cubs and the Cleveland Indians are locked in one of the most narrative laden baseball contests in recent history. Cleveland haven’t won it since 1948, similarly the Cubs haven’t even played in the World Series since 1945 and haven’t won for 108 years. However, even if you don’t care a jot for America’s Pastime, blockbuster sporting events or even the ‘curse’ of a frustrated man and his faithful billy goat – this game could have further ramifications. It could decide the next president of the United States of America.

Okay, okay stay with me. Much large scale analysis of voting trends and behaviour, of course, focuses on the key, headline factors – party affiliation, political culture and big issues such as the state of the economy and immigration. However, there is considerable academic research which shows that the public vote is also dependent on less, perhaps, electorally relevant issues.

Voters are emotional – the ‘feelgood factor’

Over two fascinating volumes the edited of assemblage of political science curios Sex, Lies and the Ballot Box and More Sex, Lies and the Ballot Box found a number of situations where this was the case. Evidence ranges from a clear (statistically significant) preference for attractive candidates (step forward president Clooney) to alphabetic biases (step forward president Aardvark).

Examples such as these are small, but significant. They are important factors that make up the milieu of how, and why, we vote the way we do. The electorate is not purely rational. Voters are swayed by emotion as well as reason.

Indeed, evidence from the United States suggests that sport plays a big role in this. The rather delightfully titled paper ‘Irrelevant Events Affect Voters’ Evaluations of Government Performance’ (try telling a bar full of sports fans in the North Side of Chicago what an ‘irrelevant event’ is), found that in every election between 1964 and 2008 a victory of the local college football team resulted in the incumbent candidate receiving an extra 1.61 percentage points of the vote. Furthermore, a victory by an avidly followed powerhouse (an example being Ohio State) could have an effect as high as 3.35 percentage points. This is commonly known as the ‘feelgood factor’. 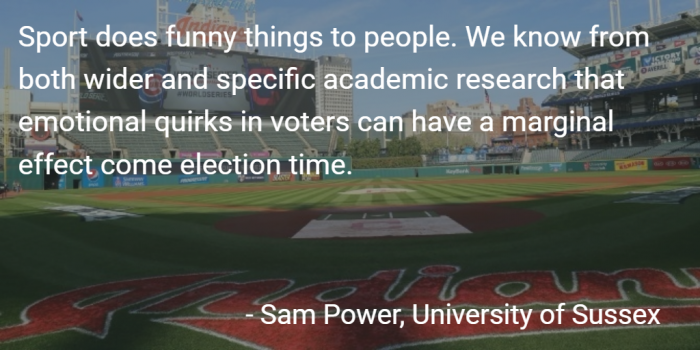 Ohio is considered to be a perennial bellwether state. The way Ohio votes, so the presidency goes. Ohioans voted for Obama in the previous two elections, Bush Jr. the two before that and Bill Clinton in 1992 and 1996. This year it is a state Clinton would like to win – but Trump cannot afford to lose.

It is also worth taking into account the rich history of sporting pain in Cleveland. Indeed, there is a Wikipedia page titled the ‘Cleveland sports curse’ outlining the myriad sporting failures. Such was Cleveland’s sporting misery that sportswriters even began theorising that there was a higher power at work, it was settled ‘God hates Cleveland’. Ever the rationalist, Nate Silver himself used this to analyse Cleveland’s sporting woes. Then 2016 happened.

In June of this year returning hero LeBron James, lead the Cleveland Cavaliers to victory in the NBA Championship finals against the reigning champion (and hot favourite) Golden State Warriors sending the city of Cleveland and wider areas of Ohio – to use a technical political science term – cock-a-hoop. The curse had been broken. Cleveland became Believeland.

From not winning a major sporting title since 1964 to winning two in the space of a matter of months could have an emotional effect in other ways. It could, indeed, be the feelgood factor that the effective incumbent in the race, Hillary Clinton, needs. A serendipitous swing of the bat could be just the swing required to take the state.

Sport does funny things to people. We know from both wider and specific academic research that emotional quirks in voters can have a marginal effect come election time.

This is to say nothing of the Chicago Cubs and their own battle with sporting malaise. No matter the outcome of tonight this ballgame will have ramifications that will be remembered long in both baseball and wider sporting lore. Today is undoubtedly historic. However, when Corey Kluber and Kyle Hendricks take to the mound tonight, there might be more at stake, even, than the World Series.

Sam Power – Sussex University
Sam Power is a doctoral researcher and Associate Tutor at the Sussex Centre for the Study of Corruption, University of Sussex.