Before this summer, few commentators would have thought that the state of Kansas would move from a safe Republican seat to a tossup race that may have implications for the control of the Senate. Patrick Miller looks at the state of the race between the three term time incumbent Pat Roberts and his Independent challenger, Greg Orman. He writes that a combination of poor campaigning, residency questions, and the withdrawal of the Democratic candidate from the ballot have come together to provide an unexpected challenge for Pat Roberts this midterm cycle.

Ruby red Kansas has only elected Republican senators since 1938. Rarely since have GOP Senate nominees won less than 60 percent of the vote. Polling shows that 47 percent of Kansans identify as or lean Republican. That advantage should carry most Republicans to easy victory. Not so for three time incumbent Pat Roberts in 2014. Roberts’s biggest problem is himself, and his personal flaws have jeopardized not just a safe Republican Senate seat but also his party’s chances at a Senate takeover.

Roberts was first elected to Congress in 1980. A center-right conservative, his politics and style now look timidly moderate compared to the firebrands currently favored by the Tea Party. He has morphed from Midwestern legislator focused on agriculture interests to Senate Republican leader on intelligence issues. But Roberts’s rise to quiet Senate stature birthed his vulnerability. If voters ever felt that Roberts was not as in touch with his constituents anymore, he skated by, lacking strong opponents and buoyed by the natural cushion Kansas gives Republicans. 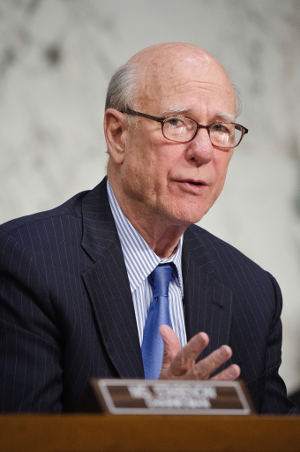 In February 2013, before Roberts was on anyone’s radar, a Public Policy Polling (PPP) survey showed that despite three Senate terms, 41 percent of Kansans had no opinion on Roberts’s job performance. His net approval was merely +3 (31 percent approve, 28 percent disapprove). In PPP state polling 2010-14, that is a remarkable anonymity that even freshman senators relatively new to their state electorates usually cannot match. Whatever Roberts had done in his DC tenure, it was not resonating with Kansans.

Enter Milton Wolf, a radiologist and President Obama’s distant cousin who challenged Roberts for the GOP nomination. Wolf savaged Roberts for myriad acts of supposed liberalism and for generally being disconnected from Kansas. Outside Tea Party groups spent $810,000 against Roberts, per Federal Election Commission records.

The key moment in the primary came when the New York Times reported that Roberts basically did not live in Kansas. The headline: “Lacking a House, a Senator Is Renewing His Ties in Kansas.” Roberts admitted to having no home in Kansas, listing as his voting address the country club residence of supporters he stays with occasionally. Roberts joked it off, saying he had “full access to the recliner.” But he failed Branding 101. If you have an image problem, avoid saying ridiculous things that make it worse.

Roberts defeated Wolf 48 percent-40 percent, but his team exacerbated his problems in the aftermath. His campaign manager told reporters that Roberts went “back home” (Washington) to rest. Roberts stopped campaigning for a month after the primary. The Roberts team, unfamiliar with real electoral competition, did not comprehend the damage to his image. In August 2014 PPP showed that Roberts’s job approval had collapsed to net -17 points (27 percent approval, 44 percent disapproval). Even most Republicans in the survey agreed that Roberts considered Washington his home and that he did not spend enough time in Kansas.

After the Kansas Supreme Court allowed the Democratic nominee off the ballot without being replaced, Roberts now struggles against a united opposition to survive his first competitive general election—ever. His chief opponent is Greg Orman, a wealthy former Democrat running as an Independent. Orman comes across as a younger, poorer Ross Perot. He styles himself a party outsider, promising to reform “the system.”

As wounded as Roberts is, Orman has largely avoided attacking him. If Orman loses, pundits will label that as the first strategic choice that cost him the race. Orman prefers positive messages about himself and generic negative attacks on Washington. Immigration is the only issue on which Orman advertising has directly criticized Roberts. Immigration is an interesting choice. Suffolk polling shows that Kansas voters listing immigration as their top issue disapprove of Roberts by net -2 points but support him by 25 points. That indicates that many immigration voters are potentially soft Roberts supporters and persuadable.

National Republicans have rallied to defend Roberts. With a new campaign team, including Chris LaCivita of Swift Boat Veterans fame, Roberts has gone intensely negative. His central attack: Obama. Pro-Roberts advertising highlight that 87 percent of the money “liberal Democrat” Orman has donated to federal campaigns since 2000 has been to Democrats, including Obama and Senate Majority Leader, Harry Reid. Republican ads are trying to nationalize the race, arguing that a vote for Orman is a vote for Obama. Outside Republican groups have poured over $1 million into negative ads emphasizing the Orman-Obama message. Orman is being outspent 9-1 in advertising entering the final weeks of the race. And curiously, Orman largely ignores these attacks, leaving them unanswered. Strategic blunder two?

Going negative is awkward and new for Roberts. He generally avoids discussing his record. His attacks are mechanical and rehearsed, but on message. Roberts mentioned Reid 20 times in a recent debate, and Obama 19. The constant attack seems effective. From August to mid-September, Roberts regularly polled 5-10 points behind Orman, but has now seemingly closed that gap. In recent polls, Roberts has increased his support since September among Republicans by a net 12 points, but just 4 points with Independents. Orman has held steady, though, at about 25 percent of Republicans, 60 percent of Independents, and overwhelming Democratic support.

That Roberts’s attacks moved the polls is unsurprising. His recent upswing is largely from Republicans, suggesting that the Obama attack moved soft Republican undecideds to him. But those were probably the easy votes to get. Polls suggest that the remaining undecideds, though many are Republicans, disapprove of Roberts intensely. Winning them in these final weeks may prove more challenging.

Strangely, Orman is likely the person who the Kansas Senate race is least about. Until now, this race has fundamentally been about Roberts.  If Republicans had nominated someone else without exploitable baggage, no one would be talking about Kansas or Orman. But big money buys a lot of flashy, foreboding ads that remind voters about that other guy they just might dislike more. Will those voters hold their noses and reelect an incumbent they dislike just to send an anti-Obama message? Republican hopes for a Senate majority may hinge on it.

Patrick R. Miller – University of Kansas
Patrick R. Miller is an Assistant Professor of Political Science at the University of Kansas. He specializes in American public opinion, political psychology, elections, and survey and experimental methodology. His current research focuses on civility and partisan identity in the U.S. He tweets about politics at twitter.com/pmiller1693.