In the lead-up to today’s election, the Silver State has been in the news, with a tightly contested Senate race between the Attorney General, Democrat Catherine Cortez Masto, and Republican Congressman, Joe Heck. Jennifer Ring writes that if Cortez Masto wins today, then she would be the first woman of Latin American descent in the Senate, and the first woman to be elected to the Senate from Nevada.

Harry Reid is retiring! Nevada’s senior senator, a Democrat first elected in 1986, who has served as both majority and minority leader — the most powerful Democrat in the United States Senate, and certainly the most powerful politician in the state of Nevada — is retiring! He was a fixture in the state long before I arrived at the University of Nevada twenty years ago. Always soft-spoken (a rarity for any politician), reliably liberal, he was well known in this big, empty western state, populated primarily with sagebrush, mining and casinos, a few people, cattle and wild horses. Harry visited us often. I listened to him many times at the University of Nevada, as he stood on a bench in the quad, surrounded by his secret servicemen, answering student questions for hours, until the students ran out of things to ask. Those gatherings were quiet…no microphone, and Harry’s calm, quiet voice required attentiveness. He was referred to on a first name basis by Democrats and hated by Nevada Republicans. He is leaving a big power vacuum as he steps down.

The need to fill his vacant Senate seat brought forth contenders who reflect the polarizing presidential race this year. Catherine Cortez Masto, the Democratic candidate, is campaigning to carry on Harry’s legacy with compatible liberal policies. Cortez Masto has been Nevada’s Attorney General since 2007. She supports raising the minimum wage, protecting Medicare and Social Security, protecting women’s reproductive rights and equal pay for equal work for women (Is that really still an issue in the United States…?? Yes!), comprehensive immigration reform, and overturning the Supreme Court’s “Citizens United” decision, a conservative decision that allows corporations to be treated as “individuals” for the purpose of campaign finance, and has turned American elections into events where fundraising has become more important than voting.

Cortez Masto would be the first woman of Latin American descent elected to the US Senate, and the first woman of any descent elected to the Senate from Nevada, a state that historically has been run by good ol’ boys. Her opponent is Joseph Heck, a good ol’ boy: a Republican Congressman from south of Las Vegas, a Brigadier General in the US army and a physician. He is a right-wing Republican, who has voted many times in Congress to curtail women’s reproductive freedom, to outlaw abortion and cut funding to Planned Parenthood, the nonprofit organization that provides reproductive advice and services to poor women. He is a supporter of the unlimited right to own any sort and quantity of guns, including assault rifles. The Second Amendment to the United States Constitution (the “right to bear arms” amendment), was created by the American Founding Fathers to enable those early Americans to protect themselves from the British, and from angry Native Americans. The “right to bear arms” has turned into a fundamentalist issue among conservatives, who regard the freedom to own guns as more important than the freedom to be safe from being shot by a mentally unstable person who bought his gun online without a background check. Having your own arsenal is particularly important, it seems, in the Wild West…places like Nevada and Texas…where the dangers of rampaging bears and terrorists…and urban youth…seem particularly imminent. 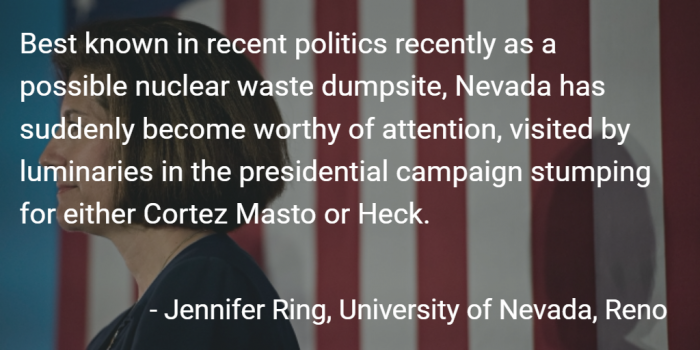 Congressman Heck supports Donald Trump for president…or he doesn’t. He has not entirely decided, especially since Trump’s boast about sexually assaulting women temporarily damaged his popularity.

Meanwhile, Nevada has burst into the spotlight! At stake is control of Congress, which has been in Republican hands since 2010, the backlash election against Barack Obama and his policies. Democrats are determined to take back the Senate, which has had a Republican majority since 2014. Even if Hillary Clinton should win the presidency, if the Senate and House of Representatives have Republican majorities, the chances are that Congress and the Presidency will accomplish nothing for the next four or eight years. The same obstructionist gridlock that bedeviled the first African American’s administration will be visited upon America’s first woman president.

So Nevada, and a handful of other “swing states” or “battleground states,” where there is an important Senate or Congressional seat up for grabs, have become the focus of national attention. Best known in recent American politics as a possible nuclear waste dumpsite, Nevada has suddenly become worthy of attention, visited by luminaries in the presidential campaign stumping for either Cortez Masto or Heck. Washoe County Democratic Headquarters in Reno has been visited in the past two weeks by Senator Elizabeth Warren of Massachusetts, a liberal democrat favored by many as a future presidential candidate, and by Bernie Sanders, Hillary Clinton’s opponent in the Democratic primaries. Donald Trump visited Reno two days ago to campaign for himself and Heck, but had to be whisked offstage by the secret service when an attendee at his rally hoisted a sign reading “Republicans Against Trump,” and Trump supporters threatened the spectator’s safety.

It’s American democracy at its wild and crazy worst! It is somewhat gratifying finally to be noticed as a Nevadan. So many of my friends in California have crossed the border to campaign for Hillary and Catherine (we’re all on first-name bases in these friendly western states…) that I have received phone calls from Californians telling me where my Nevada polling place is, and urging me to get out and vote. Meanwhile, Catherine, and Hillary, and Elizabeth, and Harry, Bernie, Barack and Michelle, and a bunch of other friends whose last names I can’t remember, have been overloading my email with dire predictions of doom and disaster if I fail to give another $5 or $10 or $25 to Hillary or Catherine. THIS is the doing of “Citizens United,” which enabled corporations to give unlimited funds to their candidates. I am certain that my donations can’t make a dent in comparison to what the Koch Brothers and Warren Buffet are pouring into my state. Still, even as my email server crashes from the overload of political solicitations, I sprinkle my tiny donations upon Catherine Cortez Masto, like holy water accompanied by a prayer for the American democracy.

Jennifer Ring – University of Nevada, Reno
Jennifer Ring has been at the University of Nevada, Reno since 1996 when she was appointed director of Women’s Studies and professor of political science. Ring’s teaching fields include political theory (ancient Greek and modern European), race and gender in American politics, identity politics in the United States, political theory and political action, and the politics of sports. Her most recent books are: “A Game of Their Own: Voices of Contemporary Women in Baseball” (University of Nebraska Press, 2015) and “Stolen Bases: Why American Girls Don’t Play Baseball” (University of Illinois Press, 2009).