Recent research has shown that despite the concerns of those who are uncomfortable with immigration, immigrants are assimilating into the US, gradually becoming more socioeconomically similar. But does immigrants’ socioeconomic mobility mean that they are more accepted by their host society? In new research, which surveyed more than 1,350 native-born, non-Hispanic White Americans, Ariela Schachter finds that compared to US-born and naturalized citizens, and legal immigrants, Americans are far less likely to wish to have undocumented immigrants as neighbors. In addition, non-Whites were seen as being far less similar, even when they were US-born,  spoke fluent English, had white-collar jobs, volunteered regularly, or were married to White spouses.

Last fall, the National Academy of Sciences released a report assessing the state of immigrant integration in the United States.  According to the latest evidence compiled in the report, immigrants are indeed assimilating: with more time in the United States, immigrants are becoming more similar to the native-born in terms of their education levels, employment status, income, poverty status, residential integration, and many other socioeconomic outcomes. We see a similar pattern across generations, such that the children and grandchildren of immigrants (i.e., second and third generations) are generally achieving greater parity with their native-born peers than did their immigrant parents and grandparents.

These outcomes are important in their own right, but assimilation also includes less tangible cultural practices and values that make someone be considered more or less ‘American’. While the cultural implications of immigrant assimilation are often hotly debated, most academic scholarship and policy analysis relies on measures of socioeconomic integration to make inferences about our cultural acceptance of immigrants, which can be more difficult to measure and quantify.

In new research, I argue it is problematic to assume that as immigrants improve on measures of socioeconomic integration, they are more culturally accepted by the American mainstream. America’s deep and enduring roots of racial divisions, minorities’ continued experience with racial stereotyping even as they meet and exceed the socioeconomic status of Whites, and charged characterizations of (unauthorized) immigrants as criminals all suggest that socioeconomic parity may not be enough to guarantee immigrants’ full symbolic acceptance.

I designed a study to systematically address whether the socioeconomic mobility of immigrants and their descendants—who are primarily Latino, Black, and Asian—leads to increasing cultural acceptance by the established host-society, who are primarily non-Hispanic Whites. In the experiment, I compare native-born Whites’ interest in being neighbors with immigrant origin individuals with how similar they considered immigrant-origin individuals to be to themselves. The design allowed me to answer the question: does native-born Whites’ acceptance of immigrant socioeconomic attainment (i.e., being neighbors with immigrants) deviate from their symbolic cultural acceptance of those immigrants (i.e., perceived similarity)? And if so, what explains this discrepancy?

To investigate this, in 2015 I conducted a survey experiment that presented hypothetical individuals whose race, citizenship status, job, English language ability, and other characteristics were randomly assigned. I then asked a nationally-representative sample of about 1,350 native-born, non-Hispanic White Americans to select preferred neighbors among these hypothetical individuals and to rate how similar they thought these individuals were to themselves. This experimental design allowed me to compare how much each of these characteristics independently contributes to how White Americans’ think about and treat immigrants and minorities, and whether White Americans apply the same criteria to their evaluations of potential neighbors and to perceived similarity.

I found that undocumented immigrant status (independent of race and other characteristics) elicits the most negative reactions from White Americans. Figure 1 shows that all else equal, the hypothetical undocumented immigrants in my experiment were a full 29 percentage points less likely to be selected as neighbors compared to native-born, US citizens. This difference is large: in comparison, working as a cashier was associated with just a 5 percentage point deficit relative to working as an accountant –  a surprisingly small effect, given how much Americans are segregated by their economic status. 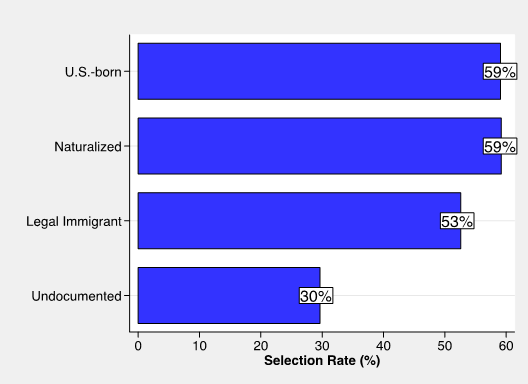 Note: Due to the experimental design, the overall selection rate across the four citizenship categories averages 50%. Source: Schachter 2016

But Race is Uniquely Tied to Perceptions of Similarity

Interestingly, race plays only a small independent role in shaping neighbor preferences: as Figure 2 shows, Black profiles were selected 4 percentage points less often than White profiles, but Latino and Asian profiles were not statistically distinguishable from Whites. While these results may seem surprising given continuing racial segregation (albeit at a lower rate than it was a decade ago), remember that the experimental design has already accounted for differences in socioeconomic status, citizenship, etc. that are often conflated with race. And outside of the experimental context, Latino-Americans are often stereotyped as undocumented, highlighting important racial consequences of bias against undocumented immigrants.

Furthermore, when it came to perceptions of similarity, I found that the disadvantage experienced by non-White profiles was almost as large as that of undocumented immigrants. This pattern, depicted in the figure below, compares the role of race in shaping socioeconomic mobility (e.g., neighbor) and symbolic cultural acceptance (e.g., similarity). 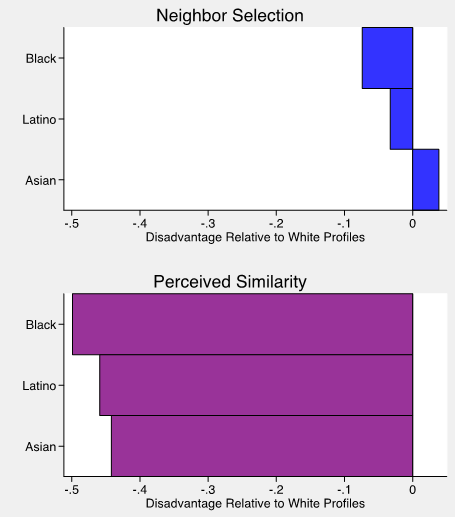 Even when Blacks, Latinos, and Asians were described as native-born American citizens who spoke fluent English, or had white-collar jobs, or volunteered regularly, or were married to White spouses, they were still rated ‘less similar’ than the average US-born White profile in the experiment. This unique, intransigent role of race emerged even though at no point in the survey were participants advised to consider race in their evaluations, nor told what it meant to be ‘similar’ to someone else. Rather, without any instruction, White Americans—regardless of their age, education level, political party, or geographic location—overwhelmingly relied on race, much more so than the other characteristics in the experiment (with the exception of undocumented status), to determine similarity.

What Does This Mean?

Altogether, my findings suggest that while White Americans are relatively open to non-White neighbors, they nevertheless view race as a fundamentally distinct characteristic that marks people as different from one another, preventing immigrants’ symbolic assimilation. Of course, labeling someone as different, even based on race, is not inherently biased, and despite these perceptions of difference, most White Americans did not use race to discriminate against potential neighbors, providing encouraging evidence that race does not have to divide us.

However, I also find evidence of strong bias against undocumented immigrants that no amount of social mobility (e.g., learning English, having a white-collar job, etc.) seems to erase. I suspect that much of this is fueled by the growing criminalization of undocumented immigration, which has clear racial implications.

The recent election of Donald Trump, who campaigned using anti-immigrant rhetoric, demonstrates how White Americans’ views of immigrants and minorities as fundamentally different from themselves can be successfully manipulated by political elites. Enacting the anti-immigrant and anti-immigration policies currently proposed by President-elect Trump and his allies will likely serve to further embed, institutionalize, and legitimize these divisions. In this way, perceptions of dissimilarity and symbolic social distance may threaten not just immigrants’ social acceptance, but also future socioeconomic gains.

This article is based on the paper, ‘From “Different” to “Similar”’, in the American Sociological Review.