Amid allegations of widespread voter fraud from the Trump campaign, the American public has turned its gaze to the maintenance of voter registration lists.  John Lindback and Mary Stegmaier provide an overview of the challenges posed by America’s decentralized voter registration system, and discuss reforms that are already underway to improve the accuracy of voter rolls.

Officials who administer elections in the United States find themselves playing defense this year. In recent months, Republican Presidential Nominee Donald Trump has frequently charged that the American elections system is rigged against him.  While Trump has offered no concrete evidence of systemic fraud, his repeated claims have created a perception problem.  US elections officials have responded by emphasizing that studies do not support his allegations, and by citing the decentralized elections system among the 50 states and the multiple safeguards against hacking voting machines.  But, elections officials will acknowledge that one part of the system – voter registration – is flawed.

The American elections system differs from many other democracies in ways that make maintaining accurate voter registration lists a challenge. The US lacks a tool that most other countries use to determine voter eligibility – a centralized, national registry of citizens.  Many countries use their national registries as the basis for voter lists at each voting precinct, which means that citizens are automatically registered to vote.  When voters show up at their precinct polling station, they present their national ID card, and if this matches, they are issued the ballot.  In contrast, the US has no national registry of American citizens nor is there a universally issued national identification card. Instead, to be eligible to vote, Americans must first take the initiative to register with their state and provide the basic identifying information necessary to determine where they are entitled to cast a ballot.  Each state and the District of Columbia maintain its own voter registration rolls – a decentralized system that contrasts with the centralized system used in other countries.  Further, because election law in the US is largely made at the state level, the states vary in their voter ID requirements and registration deadlines.  For this election, 10 states and the District of Columbia will allow people to register to vote on Election Day; the rest maintain deadlines that range from a few days to a full month in advance of the election. 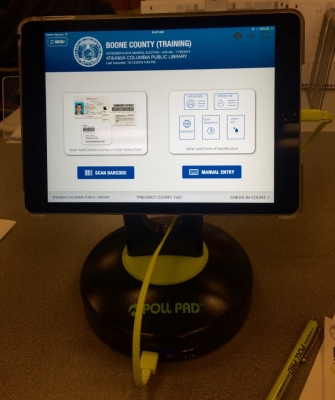 US Census Bureau statistics indicate that, on average, Americans will move 11.7 times in their lifetime and that younger people and minorities are the most mobile.  This high mobility presents the largest single obstacle to maintaining accurate voter registration lists. Different election laws among states cause confusion when people move across state lines. Some potential voters might not have the proper ID to vote or they might miss the registration deadline.  Further, voters must update their voter registration each time they change address to be eligible to vote in the next election.  Those who forget or miss the deadline will not appear correctly on the voter lists.  While they can cast a “provisional ballot”, there are no guarantees that their vote will be counted; this will depend on specific state’s law, and the follow-up research on the voter’s registration that the elections officials will perform.

A February 2012 report by the Pew Charitable Trusts documented that the processes for handling voter registration in the US are incapable of keeping up with the mobility of the electorate because election officials lack access to data that would help identify inaccurate and out-of-date registrations.  Roughly one in eight voter registrations were incorrect because the voter had either moved or died.  At that time, more than 1.8 million dead people were on the rolls, and 2.75 million Americans were registered in more than one state – a sign that when voters move to a different state, their registration lingers on the rolls of their previous states.

Despite limitations, elections officials have quietly moved forward with a reform. With support from the Pew Charitable Trusts, election officials from 20 states and the District of Columbia have banded together to pool financial resources and trade data through the Electronic Registration Information Center (ERIC). Today, the participating states now own, finance, and govern ERIC.  The co-operative purchases access to sophisticated data matching software to match the states’ voter registration records and motor vehicle licensing records against each other and against other data sources, such as the federal government’s death records and National Change of Address records filed by Americans with the US Postal Service.

More states are expected to join ERIC after the 2016 elections. Some states have held back because they need authorizing legislation from their state legislatures or they need to secure funding to participate with the other states. Others have adopted a “wait and see” attitude to assess the effectiveness of the organization.  ERIC’s statistics are expected to show dramatic growth in the next year because its largest state members – Pennsylvania, Illinois, and Ohio – are new to the organization and their participation is not yet fully reflected in the numbers.

In addition to ERIC, other voter registration reforms in the United States include online voter registration and improved registration procedures at motor vehicle licensing offices and other government offices.  These advances help reduce data entry errors, such as incorrectly spelling a person’s name or making mistakes in transcribing street addresses, and provide for the timely delivery of voter registration information from agencies to election officials.  Such advances show that the American system – despite having no national registry to form the basis for its list – is slowly and steadily improving. Although American political leaders often espouse the US elections system as a model for the rest of the world to follow, the decentralized system makes election administration, and especially voter registration, quite complex.  America’s election officials recognize the system’s weak spots and are working to address them.