Legislators flip-flop on passing a bill when they think voters want them to, but only when it’s visible

Legislators flip-flop on passing a bill when they think voters want them to, but only when it’s visible

People often perceive politicians as being both inconsistent and uncompromising despite the fact that these perceptions cannot both be true. In reality, legislators have to walk a fine line between responsiveness and consistency to remain in good standing with both their party and their voters. In new research, Adam Cayton studies how and when legislators do change their positions on issues. He finds that members of Congress change positions on very visible final passage votes in response to their districts, but not on poorly understood procedural votes.

Why do politicians change positions on specific issues? Flip-flopping comes with political risks, but so does appearing unresponsive to constituents. In new research I find that politicians change positions when voting for or against passing legislation when conditions in their districts seem to demand it, but they do not change positions on the highly partisan procedural votes that decide whether the legislation will even be considered. Responsiveness on specific issues appears limited to the more visible and widely understood actions. Beneath that surface partisanship outweighs responsiveness.

A prominent stereotype portrays politicians as pandering, untrustworthy and inconsistent. Yet another condemns them as ideologues who are unwilling to compromise, even when the public good suffers as a result. These two perceptions cannot both be true, at least not at the same time. Voters also express contradictory expectations of their elected officials. They want them to stick firmly to their principles, but also to respond to the people’s will. Voters cannot have it both ways. These conflicting expectations mean that politicians have to strike a delicate balance, avoiding the label of “flip-flopper,” while still being seen as responsive to changing circumstances. They also face pressure to remain in good standing with their party, even when constituent pressure may pull them in the opposite direction. The decisions politicians make about when to be consistent and when to adapt matter for the public’s influence over policy and trust in government.

To figure out when and if politicians will change positions in response to local (in this case economic) problems, I tracked unemployment and foreclosure rates in congressional districts from 2007 to 2010 and used a statistical model to see if they influenced whether members of the US House changed positions on three issues that came up for repeated votes. The time period covers the height of the Great Recession in the United States. The idea is that if representatives want to be seen as responsive then economic changes in their districts will cause them to change positions on economic issues. On the other hand, if they prefer to be consistent and worry about future accusations of flip-flopping they will not do so. I tracked votes on the three policies that were voted on multiple times: federal unemployment benefits, the Troubled Asset Relief Program (TARP), and Dodd-Frank financial regulatory reform. For each policy I tracked the highly visible up or down votes on passage as well as the key procedural votes that allowed each bill to receive a final passage vote. These procedural votes are equally important but less well understood by the public.

Figure 1 shows the frequency of position change (or flip-flopping) on each vote. Black bars indicate consistency while gray bars indicate a change of position. On procedural votes “yes” means opposing a motion to recommit or table which supports the policy by allowing it to come to the floor. “No” means voting to prevent the bill from receiving a vote. Clearly, consistency is more common, but position change does happen. Position change is more common on passage votes than on procedure. 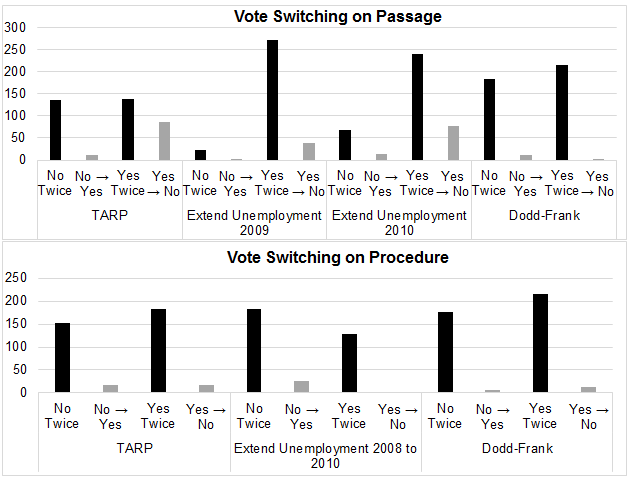 My analysis of the relationship between district-level economic change and position change on the selected votes found that on final-passage votes, members of Congress will contradict their previously recorded positions when changing circumstances in their district demand it. Partisanship remains the single most important predictor of votes, even at the height of an economic crisis, but those who did change positions tended to do so in response to local conditions. The effect was limited to unemployment benefits and TARP, which aimed to alleviate the current crisis. District conditions did not affect votes on Dodd-Frank, which was a preventative measure subject to intense partisan disagreement.

Figure 2 shows that when the House voted not to release the second half of TARP funding the lawmakers who switched from supporting TARP to opposing it came from districts with relatively little change in the unemployment rate, but those who switched from opposition to support came from districts where the economic situation was becoming dire. Similarly, lawmakers whose districts experienced large increases in the unemployment rate were much more likely to support extension of federal unemployment benefits, even if that meant backtracking on previous opposition to the measure. 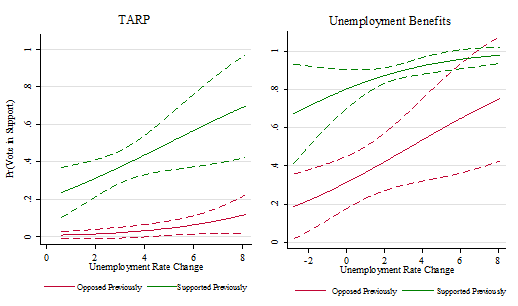 There was no such responsiveness on equally important procedural votes, which were almost entirely determined by partisanship. The lack of a relationship between district conditions and procedural votes suggests that responsiveness to constituents was superficial on these issues. Lawmakers voted congruently with the needs of their constituents when it came time to say “yea” or “nay” on the bills, but followed party leaders on the equally important votes that affected the content of the bill and whether a vote on passage took place at all. Most voters do not understand nor pay attention to legislative procedure, so the fact that lawmakers did not follow the public on these votes shows that their preoccupation is with the appearance of responsiveness and not necessarily a commitment to enacting the policies that they will support at the final stage of the process.

My findings show that members of Congress will change positions on final passage votes in response to their districts, but are much more likely to do so when the issue is simple, affects voters directly, and is less subject to pressure from the party. The resulting picture is that lawmakers are neither completely responsive to their districts nor totally constrained by ideological and partisan loyalties. Instead it appears that they balance the two, exhibiting superficial responsiveness, but also allowing party leaders to decide which policies will be considered and ultimately successful.

This article is based on the paper, ‘Consistency versus Responsiveness: Do Members of Congress Change Positions on Specific Issues in Response to Their Districts?’ in Political Research Quarterly.