One challenge a president faces is convincing those on the other side of the aisle to support their policies. But can presidents convince people from the opposite party by framing issues consistently with their moral values? To investigate, Matthew R. Miles analyzes voters’ reactions to President Obama’s rhetoric when it is framed to appeal to their moral foundations. He finds that such appeals can be convincing and persuasive, trumping voters’ political ideology.

The President of the United States is in a unique position to influence public opinion and the policy agenda; the news media devotes significant attention to them and to what they do.  Some research suggest that presidents may be able to increase public support for their policy positions through skillful rhetoric in carefully timed public addresses. But, it can also be difficult for presidents to persuade the public. Public opinion is too stable for a single presidential address to significantly alter the views of the masses. In addition, psychological dispositions influence how people receive information from the president. Even a well-reasoned argument in support of a policy might not persuade the masses because people interpret the same information differently.  The stronger the attachment to a political party, the more one scrutinizes information from those in the party that they oppose. Particularly when political elites are polarized, people are more receptive to information from elites on their side of the aisle and more critical of information from political opponents. An emerging view is that modern presidents appeal to narrow constituencies, rather than the broader public in their public speeches.

Meanwhile, morality psychologists argue that political ideology may have its roots in the moral foundations that influence how people think about what constitutes acceptable behavior. Just as children are born with a preference for sweetness against bitterness that cannot be undone by role models, threats or education about the health benefits of vegetables; the human mind is organized with innate cognitive modules (Fairness, Harm, Loyalty, Purity, and Authority) that prefer some forms of behavior over others. In the United States, political ideologies map onto this moral domain. Conservatives tend to use all five moral foundations when evaluating right and wrong, while liberals typically rely on the Harm/Care and Fairness/Reciprocity foundations. Although scholars find considerable heterogeneity in the extent to which liberals and conservatives are guided by these moral domains, numerous studies demonstrate that when policies are framed consistent with a particular moral foundation, people who value that foundation become more supportive of the policy.

In new research, I explore whether President Obama was able to generate support among conservatives for liberal policies by framing them consistent with a moral foundation conservatives tend to value. One challenge is that President Obama was unlikely to change the content of his speeches to accommodate my research. Another is that when people try to persuade others to support a policy, by default they frame their arguments to be consistent with their own moral foundations. It is difficult for people to craft an argument that is not consistent with their own moral values. Fortunately, President Obama regularly appealed to fairness values. In a speech at Valencia College in March of 2014, Obama specifically addressed six of his major policy initiatives. He devoted about half of his speech to these policies and used fairness frames to describe them.

Knowing that it is unlikely that most Americans would be familiar with the exact text of this speech, I designed a survey experiment to test how people high in the fairness moral foundation, and liberals and conservatives responded to the content President Obama’s speech. The “high fairness” treatment group read the complete text of the portion of Obama’s speech that specifically addressed these policies. The “low fairness rhetoric” treatment group read the text, but only the word “fair” was removed, and the “no fairness rhetoric” group read the same text, with all the appeals to fairness removed.  The three issues examined in my research are increasing minimum wage for poor people, gender wage inequality, and Obamacare. 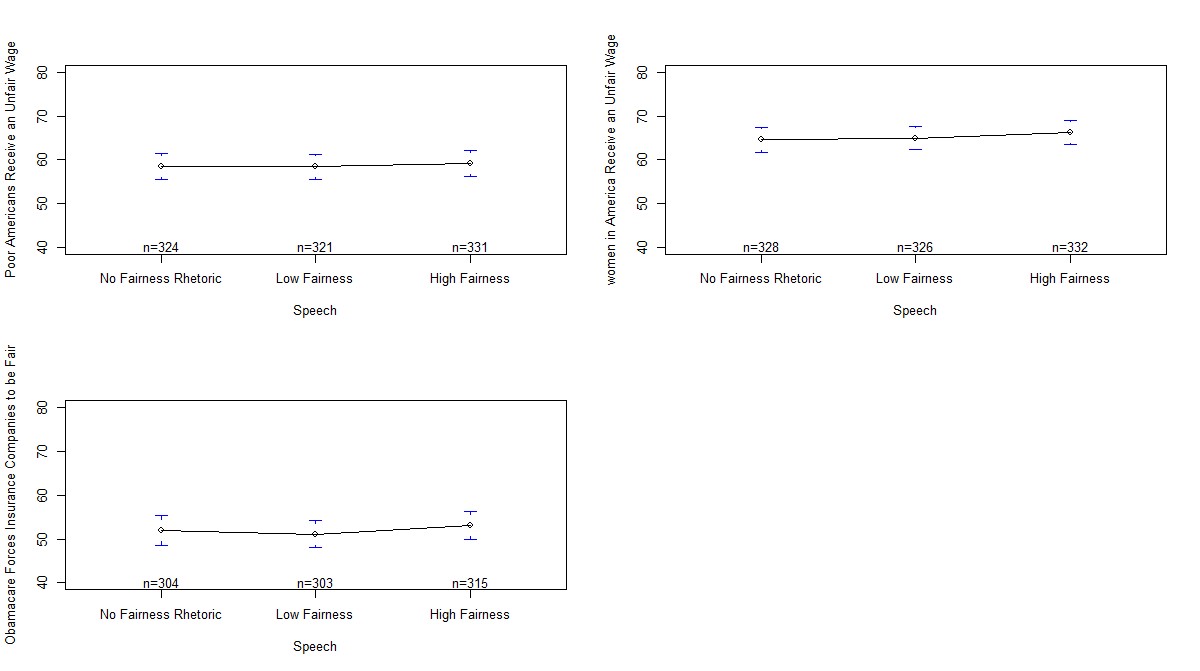 Consistent with the dominant view, Figure 1 shows that Obama’s speech did not create a measurable change in general opinions on the issue. On the surface it appears that talking about fairness does not make people more likely to support these policy issues. However, further analyses show that an appeal to fairness resonated strongly with people high in the fairness moral foundation. In fact, controlling for political ideology and the typical demographic traits, the higher one scores in fairness, the more likely they are to agree with the policies outlined in President Obama’s speech. Furthermore, people high in fairness who read the full version of the speech (high fairness rhetoric) were significantly more supportive of each of the policies than those in the control group.

One objection to these findings is that liberals are higher in fairness than conservatives (as displayed in Figure 2), so fairness may simply be functioning as an instrumental variable for political ideology. Some might argue that these results simply show that Obama is more likely to persuade liberals than conservatives. 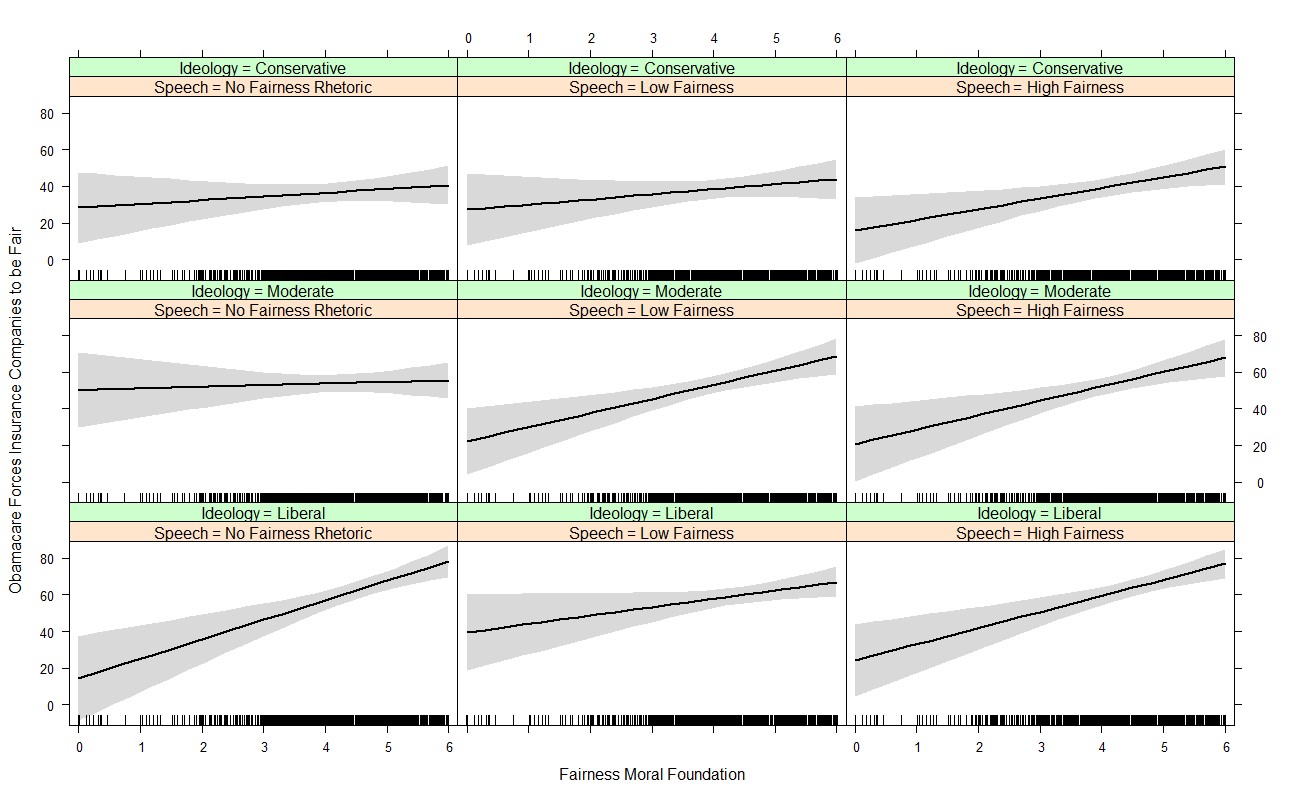 My research has important implications for two fields of inquiry within political science. First, Some argue that when the public is polarized, people attend more to the source of a policy proposal than they do to the strength of the argument presented. This implies that in a politically polarized environment, the positions of party elites will have a stronger influence on policy support than the quality of the argument. My work uses issues on which the partisan public is divided, attributed the source of the statement to a partisan figurehead and only manipulated appeals to fairness in the text. Respondents in the survey likely had strong views about minimum wage, gender equality and Obamacare before they were exposed to the content of the President’s speech. Yet, when those high in Fairness read President Obama’s speech, they were significantly more supportive of the view he advocated in the speech. This suggests that presidential persuasion involves more than the cognitive strength of an argument. Appeals to moral foundations can motivate policy support.

This article is based on the paper ‘Presidential Appeals to Moral Foundations: How Modern Presidents Persuade Cross-Ideologues’ in Policy Studies Journal.