Amidst President Trump’s talk of renegotiating NAFTA, Canada’s own internal trade barriers and protectionist policies remain an issue. As Michelle Egan writes, despite the Canadian Free Trade Agreement, there is still much to be done to seriously facilitate cross-border trade in Canada.

President Trump on the campaign trail promised to ‘renegotiate or rip up’ the North American Free Trade Agreement. As the US signals its intention to renegotiate this free trade agreement with Canada and Mexico, Trump’s tweets have focused on the Canadian dairy sector where a stand-off between politicians on both sides of the border highlights the continued importance of the agricultural sector in electoral terms.  The problem of interprovincial barriers is nothing new to the Canadian government as they have made previous attempts to address internal market restrictions in their domestic economy. Constitutional efforts have also been limited, as Canada’s Supreme Court has been reluctant to interfere in provincial affairs, ruling narrowly on trade cases, and seldom addressing issues of internal market liberalization.

Yet while Trump tweets in protest, more significant developments are occurring domestically within Canada. On the legal front, restrictive barriers have re-emerged again on the agenda, ignited by a case about interprovincial barriers involving alcohol. Gérard Comeau was charged with violating the provincial Liquor Control Act by bringing into New Brunswick more than the accepted limit of beer from neighbouring Quebec, where prices are lower. The provincial court acquitted Comeau after he challenged provincial restrictions which were struck down as violating the Canadian Constitution’s free-trade provisions. New Brunswick has challenged the ruling. It’s not just about beer. It is about the myriad of provincial rules that are thinly disguised forms of protectionism. The case has now been taken up by the Canadian Supreme Court which will review provincial restrictions on alcohol which could have important implications on internal barriers to trade. Will Canadians succeed in finally addressing their own internal market barriers?

Past Efforts at Addressing Internal Barriers

Canada is not the only federal system to confront the problem of internal trade barriers. Yet it has struggled to address restrictions that hamper interprovincial movement of goods, services and labour mobility which have been estimated as costing the Canadian economy around $99 billion dollars a year. Interprovincial trade comprises around one fifth of Canadian GDP. Though Canada emphasized its bilateral trade relations with the United States, it was clear that international trade negotiations were expanding into new areas that focused increased scrutiny on provincial regulatory practices. As a result, domestic pressures were placed on the federal government to act on internal protectionism in the context of increased external liberalization.  The result was a ministerial effort that drafted an agreement that subsequently became the Agreement on Internal Trade (AIT) in 1995. The language of the agreement was shaped by broader discussions in both NAFTA and Uruguay Round. It reflected concerns that it was politically untenable for fellow Canadians to have less market access due to continued restrictions between provinces than its North American neighbour. 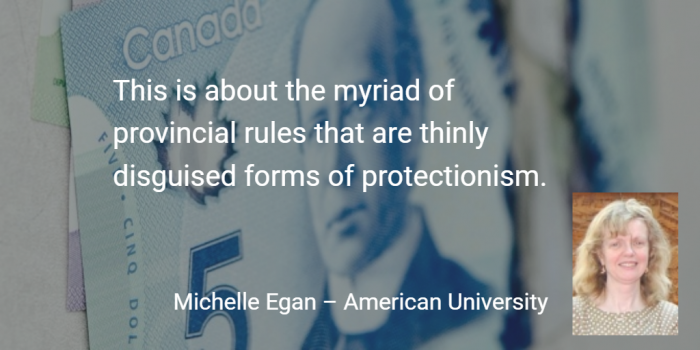 The AIT was meant to modernize Canada’s internal regulatory framework to facilitate market access between the provinces. Yet the results were limited due to the number of exemptions in the agreement. Problems have arisen due to the use of negative lists which has enabled provinces to identify various exceptions that were excluded from coverage. Labour mobility remains hampered by the lack of recognition of occupational licensing and certification, so that only a small number of professions in most jurisdictions have full labour mobility. Government procurement allowed for competitive bidding in some fields, although there were a number of exclusions covering construction, professional services and public utilities, reducing the scope and coverage of internal liberalization. Investment provisions included many local presence and residency requirements, and there were no limits on the use of investment and business subsidies which limited investment liberalization in the internal market. The original AIT did little to challenge existing practices of protectionism in agriculture, as provinces were allowed to maintain supply management systems and marketing boards in many agricultural products. And numerous provincial exclusions were extended to alcohol, as provinces maintained the right to regulate the sale, possession and movement of wine and other liquors. While current domestic trade practices hamper intra-Canadian sales, any internal treatment must be consistent with international agreements negotiated by Canada in this sector.

Canada’s internal trade agreement, however, has asymmetrical commitments, which has pushed the issue on to the agenda again as a result of the Comprehensive Economic and Trade Agreement (CETA) with the European Union. Europeans have lobbied for increased transparency and access at the provincial level opening up the prospect that internal market liberalization may be driven by external trade negotiations. Canadians fear that market access for Europeans will undermine their own domestic competitiveness due to the continued fragmentation of their internal market. In response, the Conservative government in 2014 published One Canada, One National Economy: Modernizing Internal Trade in Canada, which called for revisions to the AIT while also offering the option of an entirely new internal trade framework.

On June 8-9, 2015, the provincial and federal ministers responsible for internal trade met for the first time in four years to address internal barriers. In order to ensure that Canadians do not receive less favorable treatment than foreign interests under expansive trade agreements, regional premiers have focused on addressing a number of trade irritants including trucking rules, corporate registration, and technical barriers to trade. The resulting document, the Canadian Free Trade Agreement (CFTA) which replaces the Agreement on Internal Trade (AIT), came into effect on July 1, 2017. This massive three hundred and thirty-five page document outlining efforts to foster intra-provincial trade and cooperation also includes one hundred and sixty five pages of exemptions. There is much laudatory language on addressing technical barriers to trade and promoting regulatory cooperation as well as detailed provisions for dispute settlement and liberalization of public procurement.

Yet it has numerous caveats and exceptions to free trade. The promotion of service liberalization is tempered by requirements for local agents and residence, as well as appropriate local licensing and registration requirements. Efforts to promote investment are designed to ensure non-discrimination but are also aimed at preventing beggar-thy-neighbour policies that would result in company relocation due to provincial competition involving investment incentives. Despite its purported ambition, there are many caveats to internal market liberalization. The list of exemptions for government procurement contracts is varied with lottery commissions, utilities, and other services excluded by some provinces. Labour mobility continues to be restricted by provincial authority control over occupational standards and licensing, although there are efforts to promote mutual recognition in select trades to ease cross-border mobility. There is preferential treatment in energy markets for services providers that dampens competition. Provinces control local wine production; many provinces will continue to maintain provincial monopolies on sale, marketing and distribution of alcoholic beverages. Wine must include specific local content of 25 per cent local grapes per bottle in Ontario. There are residency requirements for the sale of bullfrogs in Ontario, while only a Saskatchewan resident is eligible to obtain a commercial fishing license, and fur licenses are only granted to residents of Nova Scotia. And a notary public has to be both a Canadian citizen and resident of Newfoundland and Labrador to practice in that province. Local residence is required for many professional services, along with licenses or certification as well as local partnerships or directors if the work is multijurisdictional. Across the provinces there are a wealth of restrictions and provisions limiting market access or investment in utilities, forestry, agriculture and fisheries, professional services, and transportation.

So will the combination of legal challenges and political pressures be enough to modernize the Canadian internal market, remove interprovincial barriers, and facilitate cross-border trade? It depends. There are a lot of aspirations in the new agreement but the sheer number of exceptions and caveats would be surprising to those who use the European internal market as a benchmark. Attention may now turn to the Supreme Court to see if it will break the logjam with the Comeau case and promote integration through law. Tweeting will not open up Canadian internal markets.

Anupama Kumar reviews The Case for a Job Guarantee by Pavlina R. Tcherneva