In Places in Need: The Changing Geography of Poverty, Scott W. Allard challenges the impression that the American suburbs offer a hub of prosperity and a safe haven from issues such as unemployment and crime. Demonstrating the alarming growth in suburban poverty across the USA and proposing some policy changes to try and fix the decline, this is a deeply researched and passionately written book, finds Paul Caruana-Galizia. 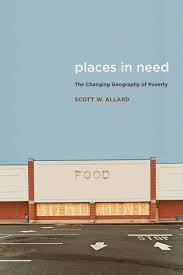 Perhaps one of the more interesting arguments to have played out in a suburban kitchen was one between Richard Nixon and Nikita Khrushchev on capitalism. The 1959 Kitchen Debate happened in a model suburban home’s kitchen, built to display America’s technological superiority at its National Exhibition at Sokolniki Park, Moscow. It was this model suburban home, furnished with a dishwasher, refrigerator and range cooker affordable to the average American worker, that exemplified the American ‘way of living’. Unimpressed, Khrushchev asked Nixon whether it also has ‘a machine that puts food into the mouth and pushes it down’.

For a long time afterwards, it looked like Nixon had won the argument. The Cold War saw the US suburbs – spacious, green and safe – sprawl endlessly outwards from its cities. Suburbia was a place where white middle-class families could take refuge from perceived urban problems relating to race, crime and poverty, and enjoy the comfort of their well-proportioned houses, trimmed lawns and stable jobs. Suburbs were the home of American prosperity.

How strange to think that if Suburban America were a separate country today, it would have about the same poverty rate – 12.2 per cent – as its Cold War adversaries, Russia and Vietnam (page 6, based on 2014 figures). Its total number of people in poverty – 16.9 million – wouldn’t be far from the number of people in poverty in Mexico, America’s current source of anxiety (8).

In Places in Need: The Changing Geography of Poverty, Scott W. Allard first documents and then explains the rise in suburban American poverty across the country’s 100 largest metropolitan areas over the past few decades, concluding with a discussion of the problems it poses for the country’s safety net. Allard explains the growth of suburban poverty primarily as a result of economic dislocation. The well-paid, low-skilled manufacturing jobs that attracted families to the suburbs from the 1970s through to the 1990s have largely been offshored or automated. The typical suburb now has an unemployment rate similar to that of urban areas. Allard also shows that the post-recession economic recovery has been weakest in the poorest suburbs. 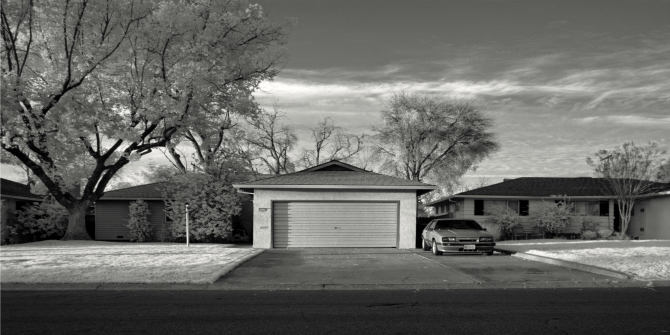 The two main competing explanations for the rise in suburban poverty – faster suburban growth and changing demographics in the US suburbs – don’t stand up to Allard’s scrutiny. While more people are moving to suburbs, pushing up the absolute number of suburban poor, the poverty rate in suburbs grew by 43 per cent from 1990 to 2012 compared to 17 per cent in urban areas. While suburbs are becoming more ethnically and racially diverse, suburban poverty trends among white, black and Hispanic populations have grown at similar rates since 1990. Neither is suburban poverty, Allard shows, the outcome of the urban poor moving into suburbs due to gentrification.

The suburban poor are like the urban poor, only with weaker support. Many governmental anti-poverty programmes were designed to address urban issues, and have not changed with the changing geography of poverty that Allard documents. Non-governmental organisations, charities and philanthropic bodies that serve suburbs are few in number and underfunded.

The first nature of suburbs – that they are far from sources of non-residential activity – makes it hard to travel to sources of help. Job searches, for example, will take longer and be more expensive. Allard interviews a public official in suburban Maryland, who says: ‘There’s no transportation to get them [suburban residents] where they need to be. And so they’re bartering with their neighbors or paying neighbors to bring them to my office.’ A suburban social service professional tells Allard that their organisation reimburses their clients for car mileage, which is expensive, rather than bus passes, which aren’t (169).

Private and governmental organisations have been slow to react to the changing geography of poverty, Allard argues, because poverty is still portrayed and perceived as an inner-city problem. He shows that in 2010, major American newspapers published eight times as many articles with the words ‘urban’ and ‘poor’ than ‘suburban’ and ‘poor’, and that coverage disproportionately focused on black Americans. Here’s Donald Trump in the third presidential debate of 2016: ‘our inner cities are a disaster…You get shot walking to the store. They have no education. They have no jobs.’ And here Trump is again in his inaugural presidential address: ‘Mothers and children [are] trapped in poverty in our inner cities.’ In fact, Allard shows us, it is suburbs that are trapping people in poverty.

Have suburbs reached a cul-de-sac? We’re familiar with the criticism. Suburbs are detached from urban life, making people depressed; they enforce isolation and segregation; and by necessitating cars, they make people obese and diabetic. (A good thing, then, suburban kitchens still don’t provide Khrushchev’s ‘machine that puts food into the mouth and pushes it down’.) Suburbs are environmentally costly: bigger homes need more energy and more land, and their distance from commercial life necessitates cars and roads. Financed by rotten mortgages, suburban expansion reminds us of the global financial crisis. And now we know they’re home to millions of people in poverty.

In the last chapter of this deeply researched and passionately written book, Allard proposes a number of policy fixes that he argues can stabilise suburban decline. They fall under different headings, from the specific – ‘Improving TANF’s [Temporary Assistance for Needy Families, a federal assistance programme] Responsiveness’ – to the more general – ‘Building Stronger Community-Based Organisations’. Although varied in practice, at their core these fixes all depend on making federal assistance programmes more ‘ambitious and aggressive’ (185). Federal assistance works better because it’s not dependent on local capacity, political will and initiative – all of which suburbs lack.

It’s questionnable whether more federal assistance will be forthcoming in America’s current political climate but, even if it were, why does Allard want us to support what looks like a failed ‘way of living’? The problem, as becomes clear in the first half of his book, is that suburbs have become too big to fail. Too many people live in suburbs and too many industries depend on them for us to just let these places go in need.