To many, American politics and society seem more polarized than they have ever been. Why, then do people cling so tightly to their values, identities and attitudes? In new research, Cengiz Erisen, David P. Redlawsk,  and Elif Erisen looked at the effects of presenting people with information that conflicted or refuted their own ideologies. They found that far from convincing people to change their minds, the new information reinforced their existing beliefs and values and actually made people think longer and harder, and with more in-depth arguments, about how they defended them.

American politics today presents an environment where the two main political camps have never seemed so divided. The public’s general dislike of political parties and candidates, and specific dislike of the “other” party, has grown to the point that the parties face major obstacles on finding common ground across a wide array of issues. For voters, it is easier than ever to avoid alternative viewpoints. And, as motivated reasoners, citizens tend to automatically defend their ground against challenging information that questions their political choices and preferences.

Without intervention, we all strive to defend and maintain our existing values, identity, and attitudes against information which challenges them. Our research finds that whether received through written, visual, social media generally, or from the members of one’s own social network, information that contradicts one’s political beliefs triggers a defensive cognitive and emotional process that appears to generate thoughts that are voluminous, causally strong, and complex. 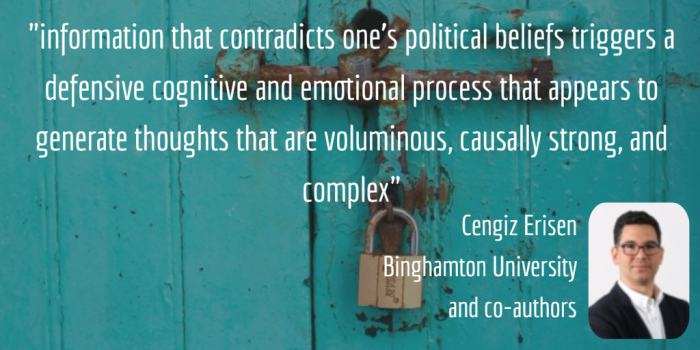 “locked door” by Serena Epstein is licensed under CC BY NC SA 2.0

We know from many studies that motivated reasoners push back again information that conflicts with their original beliefs, but we did not know what this did to the cognitive processes that are engaged. We designed an experiment where we varied the direction of the information (incongruent vs. congruent relative to the participant’s own ideological leanings) shared about a political candidate’s policy positions. We find that while exposure to this incongruent information often does little to change the minds of motivated reasoners, they do think harder about the issue, generate more responses to it when asked, and that those responses are more complex than they otherwise would be.

Figure 1 – Effect of incongruent and congruent information on volume of thoughts, depth of rationalization, thought valence, and integrative complexity. 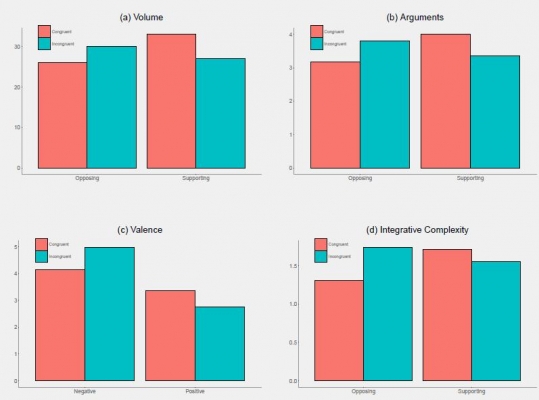 So, for example, a liberal receiving a conservative policy statement from a presidential candidate on (let’s say) immigration reform engages in a reasoning process that is more complex, writes significantly more considerations opposing the position and fewer supporting considerations, forms causally associated reasons that oppose the statement, and lists more negative thoughts and fewer positive thoughts. We find that incongruent information makes people oppose the policy statement with greater negativity and a higher quality of reasoning rather than simply making a rudimentary defense. Although triggering a negative-laden thinking process, ideologically incongruent information also decreases the possibility of any thoughts in favor of or supporting the position. In turn, people defend their position in favor of their beliefs while rejecting the piece of information that does not fit instead of updating their judgments with it.

More interestingly, we find these effects are bolstered especially for those who know more about politics. The effects are powerful for these people; they are significantly more likely to defend their ground against challenging information that is against their priors. Especially when it comes to generating opposing thoughts that counter and challenge the incongruent information, political sophisticates are quite good at shutting out the other side’s position. Figure 2 shows these effects for the political sophisticates. 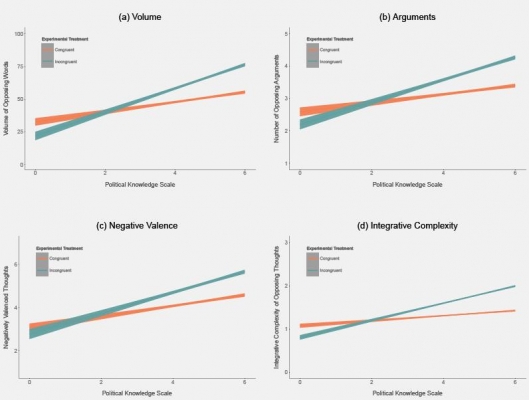 Our findings suggest that resisting a counter view or supporting one’s own ideological viewpoint triggers deeper and more effortful information processing, leading to recall from memory of more thoughts and rationales and recognition of different dimensions of the issue. This might be telling us something about the nature of motivated reasoning: people resist other political views not by few narrow-minded utterances blaming or downgrading the “other,” they put effort into constructing opposing thoughts that are rich in content and volume. In brief, whether they are opposing the counter ideological statement or supporting a statement in line with their own ideology, people produce thoughts of better quality when they defend their views.

Our findings have important implications suggesting that ideological conflict in today’s American politics (also applicable in other contexts where polarization remains strong) encourages pursuing high quality, but ultimately self-serving, thoughts and thinking process. As the political and social cleavages that divide the publics further, people stick to their ideological preferences with the assistance of their thoughts to produce a process defending its own existence. Accepting alternative views and considerations not only become a threat to self-preservation of political values, but it also triggers a motivation to rely on cognition to generate self-confirming thoughts.

Exposure to incongruent information thus includes serious consequences both for the public and for the political arena. Among various effects, political clashes across party lines and social cleavages are more likely to occur; people would self-select to ideologically congruent media sources to receive information in line with their biases; intolerance against different points of views, especially incivility in social media and in other platforms, would be more present; and eventually, social networks will get disconnected and, over time, form dense homogeneous social bubbles.

Polarization in populist states across the globe is widening as a result of right-wing nationalism, xenophobic rhetoric, and uni-partisan policies. Our work shows how this defensive mechanism is in play in the thought systems of citizens. A future that gives hope to the entire citizenry in democratic and democratizing states is possible when compromise is available and when a social contract brings diverse opinions together toward a unifying goal.

Cengiz Erisen – Binghamton University
Cengiz Erisen is a research associate in the Center on Democratic Performance at Binghamton University and an associate professor, Department of Political Science and International Relations at Yeditepe University. His current research interests include comparative political behavior, emotions, and populism. His most recent book is “Political Behavior and the Emotional Citizen: Participation and Reaction in Turkey”.

David P. Redlawsk – University of Delaware
Dave Redlawsk is James R. Soles professor and chair, Department of Political Science and International Relations at the University of Delaware. His most recent book is “The Positive Case for Negative Campaigning” with Kyle Mattes. He does research on voter decision making, emotions, and campaigns.